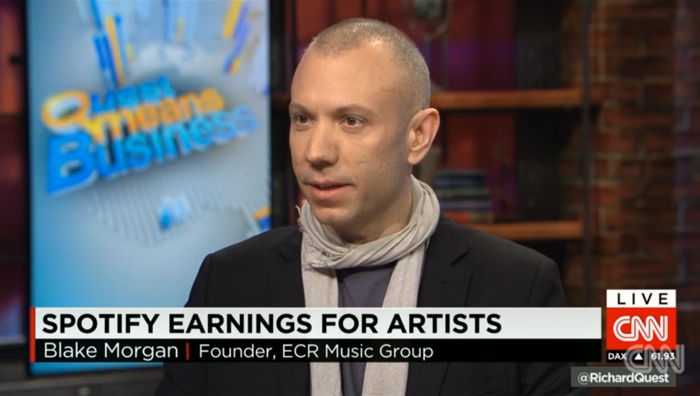 from a recent interview with Blake Morgan, founder of ECR Music Group.

CNN host Poppy Harlow: You’ve sat down with some Spotify executives here in New York, can you tell me about that meeting?

Blake Morgan: There were two real important takeaways from the meeting.  So I was invited to an artist-only meeting to have a dialogue with Spotify.

The two takeaways were this: the executives from Spotify said that the per-stream rate that artists get will likely never go up, no matter how much Spotify grows, or how fast it grows.

And after we picked our jaws up off the ground in this meeting, after we heard that, this executive went on to explain, to trumpet how important Spotify has become in the music industry, because Spotify’s streams are now being factored in on the charts.

Harlow: So we asked Spotify to come on the program, they declined the invitation —

Morgan: — you’re kidding.Harlow: — but they did — we did get a statement which was a broader statement, they said, ‘Artists have an absolute right to be paid for their work and protected from piracy.  That’s why we pay nearly 70% of our revenue back to the music community.”  What do you say in response to that, because it’s sort of like you invent an airline and then you expect people to walk.   Technology progresses and the consumer, we want what we can get that’s the fastest and the best deal for us.  So is the consumer demanding it?

Harlow: — you’re not against the service?

Streaming can work, but it can’t work if the artists who make the streaming services’ only product, music, aren’t getting paid.  And that’s the reality.