Is There Room for Spotify Among Record Collectors?

Spotify keeps on growing, but can listeners who are passionate about supporting artists justify using it? The following is an excerpt of a post written by Matt Gluskin, who runs analog audio blog Wax Times.

Spotify’s ambivalence toward what musicians deem acceptable wages plagues the service provider. Overshadowing what seems like the ultimate exposure opportunity, it is encumbering artists and media outlets in a neverending argument reminiscent of unionized labor disputes. With growing social acceptance for streaming services building momentum based on recent stats that show dramatic growth over the last four years, who’s really losing out when an album isn’t streaming? 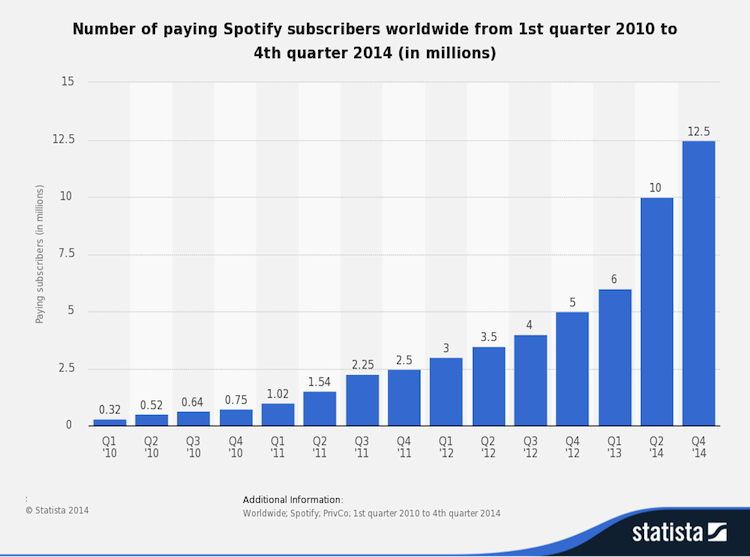 The convenience factor makes Spotify a go-to for just about anything music related, in similar fashion to the original marriage of the iPod and iTunes (or MP3s in general). Spotify’s adoption is even more evident when considering that its user base generated through the Facebook app is around 34.46 million, which is surprisingly less than competitor Pandora’s roughly 73.4 million streaming listeners. Despite Pandora’s larger audience, they too suffer the same quizzical problem; artists want more money. It seems that artists taking a larger cut of streaming profits, a thought streaming music providers are squabbling over indefinitely, means imposing higher prices for the services offered or dividing up the revenue equilaterally. After all, without the musicians, what is Spotify?

The simplest consumer thinking points to one conclusion: If a user has been offered a service at $9.99 a month over the last 4 years, what are the chances that they’ll buy into the same service at an additional $1? This is a risky proposition for any service provider whose financials could take a dive if large scale user abandonment followed rate hikes. Look what happened to Netflix after a near 60% increase in 2011. Just like taxes, people don’t want to pay more once they’ve grown accustom to paying less.

As a collector – and Spotify user – I routinely interact with music in a variety of ways. For me, Spotify is an accessory to a listening preference that is not digitally based or readily mobile. Records aren’t easy to carry around. They’re heavy in any quantity and, most of all, fragile. What options are there? I’ve already purchased the album, contributing what has been deemed an acceptable price for the music. I go out of my way to get as close to an artist as possible, putting money directly into their hands at merch tables, which is one of the few ways to be certain revenue isn’t filling anyone else’s coffers. Sometimes there’s a download card, but it’s just as easy to queue it up on Spotify. Am I still obligated to stand with the opposition despite having actually paid for the music?

There are other Spotify users like me. Casually listening to familiar music or exploring new sounds and eventually translating that appreciation into a purchase of physical media or legit downloads. This type of consumer impact may hold a large amount of undiscovered leverage in an argument that seems to have no middle ground.