I finally get it.

It took getting over the ‘Snapchat is for sexting’ learning curve misnomer, hovering around the ‘Snapchat is exclusively for friends sending triple chin selfies’ misconception to finally landing on what I now understand Snapchat to be: the destination for long-play stories. Where Vine is the single and Instagram is the EP. Snapchat is the social media equivalent LP.

Since integrating Stories in late 2013, the feature has allowed users to save snaps (photo or 10 second video clips) to “My Story” to be viewed unlimited times by followers for 24 hours. This was an expansion on Snapchat’s core functionality of sending photos that could be viewed for just a few seconds and then would disappear forever.

Unlike Facebook, which is cluttered with Buzzfeed distractions, incessant baby photos, your uncle’s Obama-Is-A-Muslim rants and, worst of all, parents, ‘the kids’ have left and moved on. First to Instagram which provides an endless stream of link-less photos from friends, but the parents have started to infiltrate. Now, Snapchat has started to take over the youngens crowd. However, it should not be belittled or underestimated.

+ Facebook Is Dead To Us: What Teens Think About 11 Of The Biggest Social Networks

I knew I should probably force myself to at least understand how to use it – considering it is about to receive a $19 Billion valuation and has over 700 million users. After virtually giving up on it nearly 6 months ago because I saw no value in sending disappearing photos to a few friends when I could just post them to Instagram, I logged back in a couple weeks ago to give it another go. Last week I was shuffling through my friends’ “Stories” when I stumbled upon this.

Yes, it’s a recreation of the N64 video game Goldeneye in the form of a Snapchat story. If you don’t use Snapchat this might not seem that impressive to you. But consider the fact that Snapchat limits you to 10 second clips that must be recorded by holding your finger on the screen. You can’t add sound to the video after the fact – everything must be done in real time. No editing in post. They literally held up another phone playing the Goldeneye music next to the phone that was filming.

All four Snapchatters created their own Story on their channel with different characters and point of views. They nailed the graphic details from the character selection dance, to the awkward camera angle pointed at the gun, the fall-to-the-knees death and the blood that slowly covers the screen when you die. I wondered, though, how many who watched this incredible Snap Story actually understood what this was a recreation of as Snapchat’s primary users were born right around the time this game actually came out. The Lad Bible posted stuart_edge’s Goldeneye Story video on their Facebook Page and it has already received nearly 8 million views.

I spoke with two of the creators of this magnificent adventure, Shaun McBride (shonduras) and Evan Garber (emgarber). They are both full-time Snapchatters (they make their entire living from sponsorships for their Snapchats), they are both 27 and both currently working on the first scripted Snapchat series, Snapper Hero, which is set to premier on the SnapperHero Snapchat account sometime in March. The show is bankrolled by AT&T and produced by the YouTubers of CorridorDigital.

Boston based Evan Garber (emgarber) got known on Snapchat for his intricate Snap art. All of his creations are hand drawn in the Snapchat app (without the aid of any third party applications). He graduated from Syracuse University with a degree in mechanical engineering and worked as an engineer up until last June when his company downsized and he got laid off. He decided to leave the engineering field and pursue Snapchat full-time. He had already had a few sponsorships for his snaps and knew how he could get more.

He saw companies struggling with how best to use Snapchat and he had the vision “by practicing to become a better Snapchat artist, I could then come up more creative ways to work with brands and companies to actually create engaging, visually appealing pieces of content that would set their story apart.” And he did. Companies have since hired him to create art on their accounts and promote events from his own account as well.

Some of his drawings take a hours to create. There’s no erase feature (except for a simple undo button for the previous stroke), so he has to be incredibly meticulous with his creations – on the first take.

Garber not only creates interesting Stories, but he tries to respond to everyone who sends him personal snaps.

Salt Lake City based Shaun McBride (shonduras) worked for a skateboard and snowboard company and he traveled a lot for his work. He started documenting his travels on Snapchat. He said he didn’t use Snapchat to show food (like many average users), rather he created irony in unique situations. One of his early snaps of a grandma on a plane with rainbow hair who he turned into My Little Pony by drawing the pony body and tail, made it to the front page of Reddit and helped gain him a tremendous amount of followers. 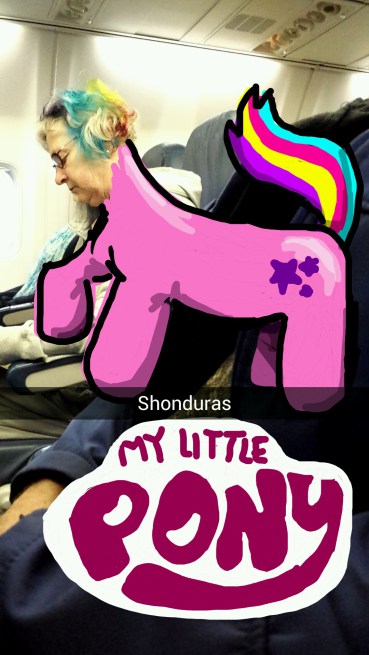 Snapchat displays very limited stats and analytics and doesn’t display follower counts, but McBride estimates he has “hundreds of thousands” of followers.

In effect, it is very difficult to grow a Snapchat audience. And virality is extremely rare.

Snapchat stars are starting to become a thing and McBride and Garber are two of the first. Some brands are paying $10,000+ for sponsored Snaps from some of the biggest Snapchatters. This may seem odd when you consider that these sponsored snaps disappear within 24 hours. However, if you think about it, TV commercials disappear the moment they air and many of these Snapchatters’ audiences will soon rival TV audiences.

As we’ve seen with Vine (launched January 2013 – over a year after Snapchat), which publicly displays follower counts, some of the biggest Viners, such as King Bach (with 11 million followers), currently earns about $110,000 PER 6 SECOND sponsored vine, there’s a lot of potential for new media money.

There have yet to be any breakout music stars from Snapchat. The biggest breakout musical act from Vine is the husband and wife duo, Us The Duo, with 4.5 million followers. They gained a following by posting 6 second videos of themselves harmonizing to current hit songs. Their most current post is a sponsored Vine for Hewlett Packard. It already has over 1.6 million “loops.” They signed to Republic Records about a year ago – just four months after their first Vine.

We’re in a new era. What was started by OK Go a decade ago with their legendary treadmill video has morphed into all sorts of creative, low-budget content created by DIYers on every new platform to pop up since YouTube. Too many artists become obsessed with high production value content and then paralyzed by the fact they have no money to create that vision. You’re creative people! Come up with creative content that’s uniquely you. OK Go (and now thousands of YouTubers have done it), King Bach, Us The Duo and many other successful Viners are doing it, and now Evan Garber and Shaun McBride are doing it on Snapchat. Who will be the first musical act to break out on Snapchat?