How Much You Should Be Charging For Merch

I was just at a show last night at the Echo in east LA. A band from Philly was the 2nd of 3 acts. The other two were local, but this Philly band was who we were there to see. I went with a manager friend of mine who had been following these guys for a few years. There was a pretty decent turnout for a Tuesday night. If I had to guess, maybe 100 in the club. Definitely not packed, but it didn’t feel empty.

I was absolutely floored by this band, Low Cut Connie. They put on a hell of a show. True rock and roll. They tour with a full upright piano – and by the looks of 4 of the 5 band members struggling to just shift it to the side of the stage after their set, makes me think that maybe a keyboard (positioned on a constructed, piano-like structure might be the way to go for the next tour – until they get a full road crew). But either way. I get the aesthetic. And it sounded fantastic.The lead singer/piano player, Adam Weiner, embodied Jerry Lee Lewis – playing style and energy – atop of an indie rock landscape. It worked. After a few songs the drummer, Dan Finnemore, traded spots with the rhythm guitarist and sang lead on a few tunes – grabbing the energy conch from Weiner and smashing it. He eventually scrapped up the pieces and sprinkled them back on Weiner, but by that point no one actually cared who was fronting the band because it just worked. Finnemore and Weiner couldn’t be more different in look and playing style. Weiner a rockabilly piano playing virtuoso in white socks, black shoes, black dress pants and white button down, unbuttoned enough to literally pick a chest hair and blow it out to the front row (f’in right!). And Dan a British gritty rocker, with slicked back hair, glasses, a beard and a denim shirt playing a red Gibson 335. The 3 part harmonies were locked in – a true sign of a well-rehearsed band. The rhythm section was super tight and each player left a pint of sweat on the stage. 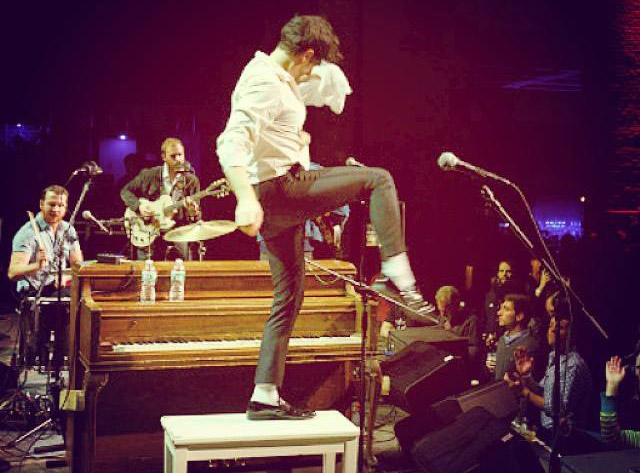 It was a great show. So naturally I stopped by the merch table afterwards to get their vinyl and a T. They had someone running their merch for them (good form!) and when she told me the price for the vinyl and T I thought there must be some kind of mistake. $27?! For both? No way.

They left money on the table. I told her to round me up to $30. But still, too cheap.

Don’t just price your merch to cover your expenses, charge what it’s worth and what’s competitive in the market. Merch is THE way that you will sustain your tours and how you can eventually make serious money on the road.

+10 Ways To Sell More Merch At Your Shows

T-shirt (American Apparel or equivalent) = $20
– if the shirt is shitty quality then you can charge less, but don’t make shitty quality shirts.
– offer and DISPLAY female cut shirts. Ladies will appreciate (and buy) them if they are displayed properly

USB sticks (with album(s), artwork, videos, extra goodies) = $15
** If you’re selling these, make sure you have a large, clear display of all that is included like:

And make sure to include combos to encourage buying more:

Most of your first tours you won’t make much from the venue, promoter or headliner. But these can actually be quite profitable tours if you sell your merch right. ALWAYS announce it from the stage. Make sure you bring lights, extension cord and power strip (just in case the merch location isn’t well lit). Make sure the display is large and enticing. Of course, you should be taking credit (Square is a great option – enable tipping!). And always have someone running the table (not in the band) from when doors open to when they close.