A Famous Producer Asks Pandora, “Why Are You Paying Me So Little?” 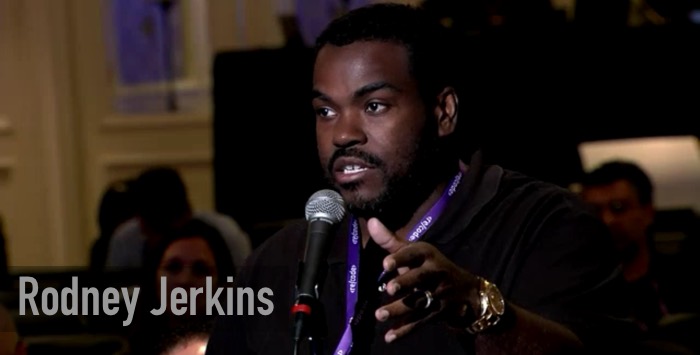 …at the Code/Media conference last week, during a Q&A with Pandora co-founder Tim Westergren.

Rodney Jerkins: Hey Tim, Rodney Jerkins here.  I asked a similar question to Robert [Kyncl] from YouTube this morning, he kind of gave me the runaround.  So I’m hoping because you’re a fellow musician that you can answer this question:  Pharrell Williams, the artist, made $250,000 from Pandora for ‘Happy’.  Pharrell Williams the producer/songwriter, made $2,700 from ‘Happy,’ off of 43 million plays, which is about 60 bucks per million plays.

What are you guys going to do to change the model so songwriters and producers — the content creators —  get properly paid?  As a songwriter myself, as I’m listening to my songs on Pandora, it’s kind of embarrassing to actually receive these checks sometimes in the mail, that can’t even take care of our family’s monthly mortgage or allowance, knowing that we have a hit song that just garnered 43 million plays across your stations.

So what are you going to do actually change that?

Tim Westergren: Let me tell you — so, speak on that from a couple of different angles.  So one, you’re really discussing  a ratio of performer to composer.  And that has been established by federal law and consent decree over time.  So, 4 percent of revenue goes to the publisher, the composer, about 50 percent goes to the performer, that’s the way the law is set up right now.

We don’t have a quarrel with that ratio changing, that’s not really — should it be different, should it be 50– should it– they be the same?  That’s not really… our quarrel.  And I think that’s to be figured out from the content side, and I think that… performers would say ‘we should get a lot more because we’re on the road 200 days a year,  and we have all these other obligations, it’s fair,’ again we don’t really have a dog in that fight, that’s — that’s to be figured out there, so I think that ratio is one question.

And then in terms of the raw amount, that kind of getting back to what I said before, which is…  so we made a small profit last year, we’re going to do north of a billion dollars next year.  And we have out of a team of 1,500 employees, about a thousand probably whose full-time job is monetization on Pandora.  And we’re giving 50% of our revenue back to the industry.  So we are, sort of working as hard as fast as possible, and are incentivized to do so, certainly as a public company to generate as much revenue as possible.  And a big piece of that’s going back to the industry.

I don’t know what more to do, then, kind of what we’re doing with that, in that regard.

And I think this industry will grow over time, and as the platform and these capabilities I’ve talked about, through Pandora Amp start to kind of take root, and artists understand that, I think it will be, I think this — I think there will be a greater understanding about it.  And not to be forgotten, broadcast radio does not pay performers anything.  So every hour that goes from AM/FM to web radio, this is kind of the big elephant in the room, is a huge positive move for the industry.

You know, radio — broadcast radio is a $16 billion, $17 billion industry that has never paid performers. So–

Westegren: –it pays songwriters, but not performers–

Mossberg: Yeah but his point is about songwriters.

Westergren: –but he mentioned both.  So I think one of the most positive economic shifts in the industry is this move from broadcast radio to internet radio.

Mossberg: So, we’re really out of time.  But to summarize, he’s telling you to lobby the government about the split between songwriter and performer.

Westergren: For the ratio, certainly.

Jerkins: I mean, your answer is very similar to what the guy from YouTube said as well, and I feel like it’s the runaround.  I do feel that Pandora pays more than the YouTubers and Spotify, but I think once you embrace the creative community, the writers is where the actual content begins.

And you being an artist you know, there’s not an artist without a song, and that’s it.

Mossberg: OK, Tim, thanks very much.