The Music Contract From Hell That You Should NEVER Sign 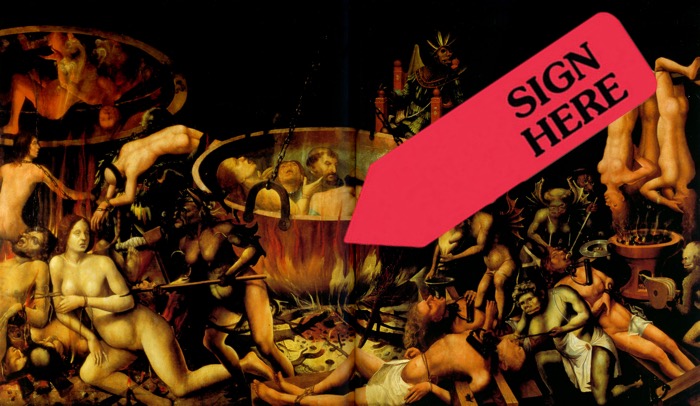 Looking for an example of a bad music contract? Here’s one to avoid at all costs — and guidance on how to find something better.

The following is part of a series by music industry attorney Steve Gordon that focuses on every type of artist contract imaginable — including the bad music contract example you’re about to examine.

Production companies usually consist of one or two individuals with limited resources who would like to make a few demos for an artist in order to shop her to a real record company.  Unfortunately, more than occasionally, such a company will present an agreement that locks the artist into a long term deal, makes the company the artist’s music publisher, and takes a substantial cut of all the income that the artist may make in the entire entertainment business, as well as other horrors.

The first agreement we will examine in this installment is typical of a contract offered to an artist by a production company masquerading as a “label.”  Be warned: This agreement is a terrible deal for artists.  It presents all the negative terms typically contained in an exclusive recording agreement offered by a major label including multiple options for additional albums that could extend the duration of the agreement indefinitely and 360 provisions designed to give the company a significant portion of the artist’s income from any of her activities in the entertainment business.

(See more discussion of 360 deals below, and detailed tips on how to avoid getting screwed by a 360 deal here.)

But the first agreement offers none of the benefits that a major label deal contains, such as a recording budget and advance.

There are many differences between a production company and a real label, but they have at least the following in common: Both production companies and labels own or have access to recording studios and equipment, and they both have producers on payroll or relationships with indie producers who they can call on to make professional recordings.

A real label, however, has the following additional assets:

• Staffers and/or freelancers who provide both traditional marketing and publicity as well as online social networking support;

• A video department to produce, oversee and pay for the production of promo videos and electronic press kits (EPKs);

• Relationships with popular TV shows such as Saturday Night Live, The Tonight Show and Last Call to help the artist garner invaluable exposure;

• Relationships with leading digital services to promote an artist – for instance, by continually lobbying iTunes to feature the artist on its home page;

• Distribution channels through all the big-box chains, such as Walmart, Best Buy and Target to sell physical copies of records;

• The ability to coordinate digital distribution to hundreds of digital music services throughout the world;

• The money necessary to pay staffers and freelancers to do the all the work above; and

• Perhaps most importantly, the financial capacity to pay the artist an advance on top of production costs so she can quit her day gig.

This form agreement came from an actual production company that presented an agreement that only a real label should offer. As we just discussed, a production company has almost none of the resources of a true record label. The production company should have offered a “shopping deal” under which they would have a limited time to find a suitable label deal for the artist. Instead, this agreement includes provisions that are completely unfair and unjustifiable. Here is an overview of the key provisions and why they should be changed:

The term of this agreement is an initial period of 15 months followed by options for the“delivery” of four additional albums. Since delivery depends on when the company decides to record each album, the contract could continue indefinitely. The artist could hire a lawyer to try to get out of this contract, but at the end of the day, the production company could contend that the contract was valid which could impede the artist from securing another deal.

If a company is merely a production company and not a real label, it should offer a shopping deal under which it has a limited amount of time to produce at least five or six tracks (sometimes referred to as “demos”) that feature the artist’s best work and shop those tracks to real labels to help the artist get to the next level. Generally, a production company has nine months to shop the demos. If the production company cannot secure such a deal, the artist should be free to terminate the agreement.

A production company does not have the resources to help the artist as a real label could, and therefore, it should not try to trap an artist in a multiple album deal. On the other hand, if the production company secures a good deal for the artist with a reputable label, they should share with the artist in monies the record label pays to the artist, including advances and royalties for the artist’s exclusive recording services. A fair deal may provide that the company will share in such revenues for the first several albums released by the label.

The lower royalty of 5% would be appropriate for shopping an artist who already has professionally produced recordings and the production company doesn’t have to do anything but shop the artist. The higher royalty of 20% would be appropriate when the production company has to produce all new demos and perhaps even release tracks on social networks and possibly iTunes to get a “buzz” going.

Yet many production companies will try take to advantage of a naive artist and demand 40% or 50% or even more. The production company’s royalty should also be limited to advances and royalties payable by the label for the artist’s exclusive recording services; in a terrible deal for the artist, such as the first one analyzed in this installment, the company will also try to secure a percentage of any income the artist receives in the entertainment business including live performance and publishing.

Since income from recorded music has drastically declined in the last 15 years, labels have changed their standard deal to share in money from other income streams including merchandise, endorsements, live performances and touring, and even appearances in TV programs or movies. Because labels wish to share in all of the artist’s income streams, these deals are known as “360.” A major label that can provide the marketing muscle to make an artist a household name arguably deserves to share in those income streams, but a production company has not earned that. However, if the production company actually does something to help the artist make money from other activities than record sales, there is nothing wrong in rewarding them for that success. For instance, if the company finds a good paying gig playing at a private event, the company may deserve a percentage of the fee payable to the artist.

And now, the agreement that you should NEVER sign.

(i) gives the artist the right to approve the choice of the “Distributor” (that is, the label), participate in the negotiation of the deal, and approve all the terms of that deal;

(ii) limits the Term to nine months unless the Company find a suitable deal; and

(iii) limits the company’s royalty to income flowing from the label, and not from any other income that the Artist may earn in the entertainment business.