Watch Out Harry Fox, Loudr Is Coming For You

But, Limelight is shutting down its song clearance program next week. So Loudr is swooping in to pick up the slack.

Loudr is undercutting their only competition, Harry Fox, by offering a cheaper service. For $15 (less if bought in bulk), any artist can obtain a compulsory mechanical license simply by estimating the quantity they will sell and then calculating that by the statutory royalty rate set by the government (9.1 cents per download/physical sale). If the artist ends up selling MORE downloads than they initially estimated on Loudr, the artist can go to their completed order and repurchase license for a 50% discount (on the service fee).

Loudr and HFA (Songfile) pass on 100% of the royalties (paid by the artist for obtaining the license) to the publishers.

Both Loudr and HFA’s Songfile service charge 1 cent per stream which is MUCH higher than what every streaming service is paying per stream for mechanical royalties.

Loudr’s CEO, Chris Crawford told me that they overestimate this rate by so much because it’s “market rate” that has been set (by HFA). But, I would advise artists NOT to pay for a license for streams because most services already pay publishers directly (more on this below) AND if a publishing company actually wanted to audit an artist, they could only demand the amount legally owed to them which is an extremely complicated equation based on each streaming service’s revenue and subscriber count.

Here’s how US streaming mechanical royalties are calculated (set by the US government): 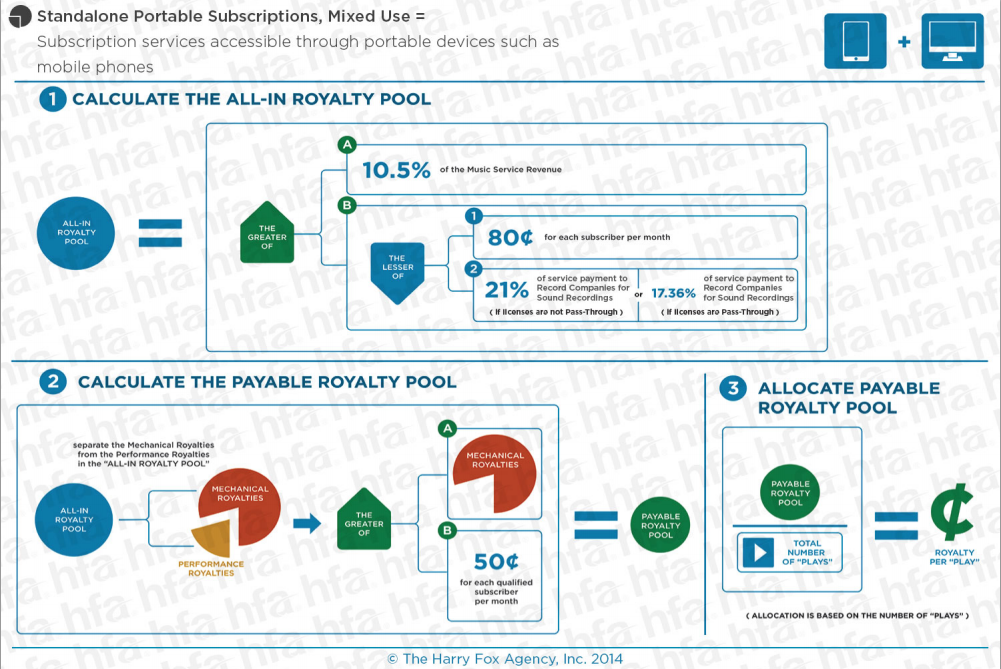 See the other charts for all other streaming options here.

You don’t need a mechanical license for streams on Spotify, Rdio or Deezer!

And this is where it gets a bit tricky (and awfully confusing for the Loudr/Songfile customer). Spotify pays mechanical royalties directly to Harry Fox and then Harry Fox pays these royalties out to the publishers. The royalties artists see on their statements from their distributor (CD Baby, DistroKid, TuneCore DO NOT include mechanical royalties). So Spotify streams should not be calculated when purchasing a license from Loudr (or Songfile) for a cover song – even though most would think they would be. Similarly, Rdio has a direct deal with Music Reports Inc. (MRI) and Deezer’s mechanical royalties are paid directly to collections agencies in the territories in which they are available which then get distributed to the appropriate publishing companies. Loudr lists SoundCloud and Bandcamp streaming as examples of services which you’d need to pay for streaming mechanical royalties, however they don’t explicitly list which streaming services require a mechanical license and which don’t. Technically, hosting a streaming cover on your website requires a license.

Loudr’s CEO, Chris Crawford, mentioned to me over the phone this morning that most US streaming services are moving in the direction to pay publishers (or HFA/MRI) the mechanical royalties directly anyways.

Also, currently SoundCloud doesn’t pay anything for streams (except to WMG and soon to Sony and Universal). So an artist would be LOSING quite a bit of money if they bought a mechanical license to (legally) put their song on SoundCloud. They might as well continue the route of uploading their music (illegally) like most users have been doing since SoundCloud (and YouTube’s) inception and let the services sort it out with the labels and publishers later – like YouTube has (kind of) and SoundCloud is starting to do.

But YouTube is another case altogether. All sorts of laws are being broken here, but because YouTube has been able to monetize these illegalities, the labels and publishers have come around to getting paid for (illegal) cover songs and fan videos.

Loudr explains they will not license remixes or samples. These require permissions directly from the master owners (the labels). But no indie artist ever obtains these. It’s nearly impossible to do so as an indie artist. DubSet is looking to fix this, though. More on them in another piece.

Loudr will also not issue licenses for translations (“Let It Go” in Spanish) or derivative works (Weird Al) as this requires permission directly from the publisher/songwriter.

Bandcamp is releasing their subscription service any day now and it is unknown if they are going to pay out mechanicals directly to Harry Fox (like Spotify) or Music Reports (like Rdio) or require the rights owners to do that (like iTunes does in the US).

Loudr understands that 30% commission is a hard sell (especially when all they’re doing is sending their artists’ songs to digital retailers, so they setup this stand alone mechanical licensing service to allow artists to distribute with another service of their choosing (like DistroKid, CD Baby or Tunecore).

“The launch of Loudr Licensing puts us in a strong strategic position to empower artists, compensate music publishers, and continue scaling our technologies to support the mechanical licensing needs of enterprises in the music space.” – Chris Crawford, CEO, Loudr