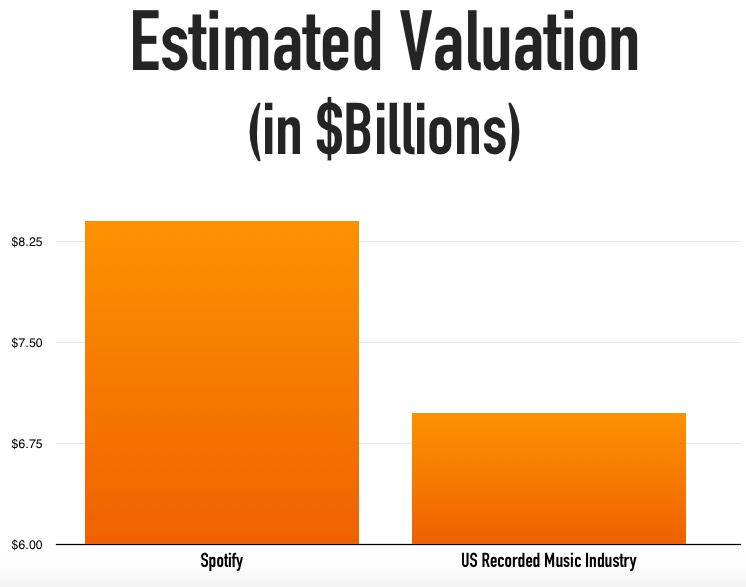 It wasn’t a rumor: according to details confirmed this morning by CNBC, Spotify has now successfully raised a Series F (yes, F) of approximately $350 million.  The round, led by Goldman Sachs, pushes Spotify’s total funding to roughly $900 million, and values the company north of $8 billion (yes, with a b).

Spotify has burned through hundreds of millions of dollars (see graph below).  More critically, Spotify does not have a concrete path towards profitability, has no known or interested buyers capable of paying $8 billion-plus, nor any published plan for a Wall Street IPO.   Spotify does, however, have 15 million paying subscribers, though that number is far too low to sustain the business on its own. 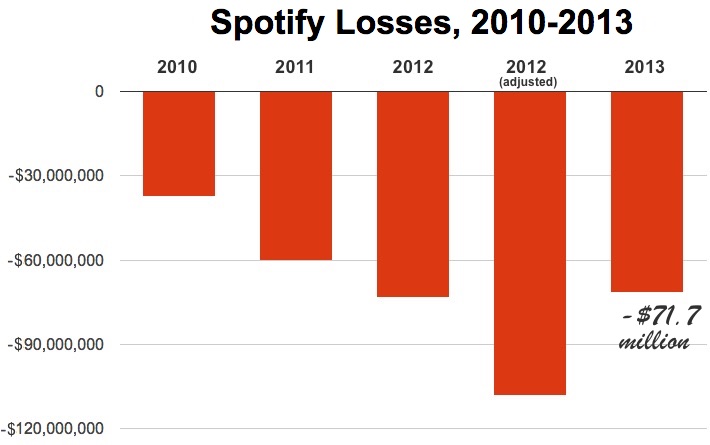 The avalanche of funds comes just in the nick of time: according to sources, Spotify has already burned through its to-date tranche of $537.8 million, and desperately needed a new infusion.

The news comes right on the heels of a sudden Grooveshark death, though it’s unclear if this spells any benefit for Spotify.  Grooveshark catered to millions of freebie users, many of whom will undoubtedly migrate to Spotify.  But Spotify needs a higher-class crowd: over the past few months, major labels have been threatening to kill the freebie parade, and force Spotify to focus on premium-paying, ‘good customers’ instead.

That has sparked a cantankerous industry debate, with the very future of streaming at stake.  “The idea of ‘taking down Spotify,’ to trade with another big tech company, will guarantee that there will not be another $1 billion dollars in risk capital that will come in and try to build a music streaming service again,” Kobalt CEO Willard Ahdritz recently spewed to Billboard.

“And what happens then? Will kids go back to buying CDs? No.”