The More Money Spotify Makes, The Less Artists Get Paid… 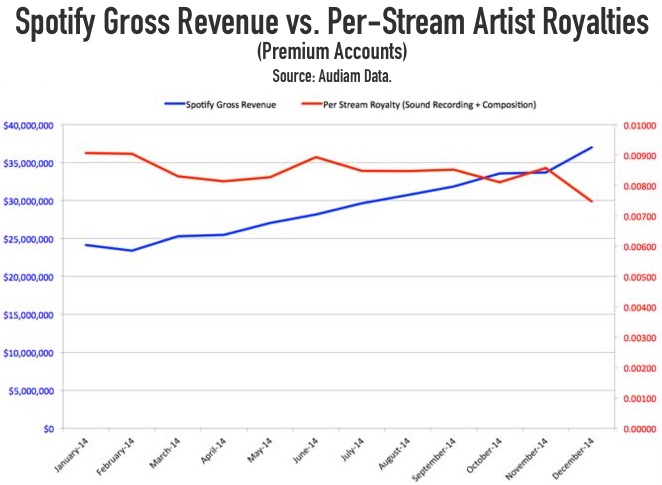 The following guest post comes from Jeff Price, one of the original founders of Tunecore and more recently, Audiam, a company whose mission is to gets rights holders paid from the digital use of their music.

“As we grow, the amount of royalties we pay out to artists, songwriters and rights holders continues to climb faster than ever. We have now paid more than $3 billion USD in royalties, including more than $300 million in the first three months of 2015 alone.  That’s good for music, good for music fans… and good for music makers.”

There is good news in their numbers.  Unfortunately, that’s only part of the story.

In 2014, as Spotify’s Gross Revenue, subscribers and music royalty pool went up, the amount artists, songwriters, publishers and labels were paid went DOWN.

You can see this trend in the graph I posted at the top of this article.  You can also see the decline across various metrics:

Some Notable Spotify Premium Statistics From January, 2014 to December, 2014.

Why Is this Happening?

In other words, it appears anyone that pays $10 a month for unlimited music streams a hell of a lot of music.  In addition, as the rates drop, the money is being spread over a larger number of artists causing the money to spread more “thinly”.

The end result in 2014 for Spotify’s Premium service is an artist needs increased streams each month, at what appears to be untenable rate, to just stay even with were they were financially the previous month.

It also means that in many cases, they can have more streams than the previous month and make less money.  But this isn’t just limited to Spotify, it can be seen more dramatically across all music streaming services we track: 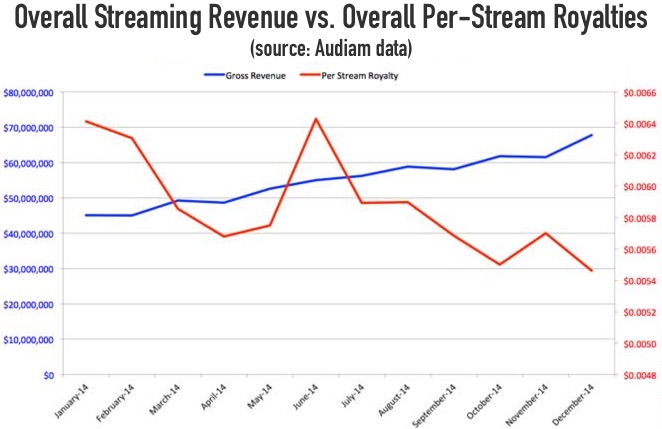 This model could work if people treated the streaming service like a gym membership.  That is, pay for a service and only 10% of them truly use it.  If this was the case, the royalty pool would be much higher but not diluted so drastically by streams.

It could also work if there were limits on the number of streams each individual could have each month.

In addition to the lowering per stream and the money being spread wider across more artists, a significant percentage of the money earned by songwriters and music publishers is not being paid to them due to Spotify (and all interactive streaming services) building no infrastructure to make the payments. Instead, they outsourced the job to third parties who cannot fulfill their obligations.

(Based on recovery of past mechancial royalties for its clients, Audiam projects that between 7% to 15% of all earned US streaming mechanicals are either not paid at all, paid in part or are paid to the wrong entity.)

A possible alternative business model may be to pay for the specific streams on a more direct basis.  That is, if someone pays $10 a month, and only streams songs from the album Broken Boy Soldiers by the band The Ranconteurs, the money from these streams would only be paid for the use of these songs and not impact/dilute the royalties to another rights holder.

Finally, the launch of the Apple streaming service at the end of the June, 2015 could catalyze a quick en-masse shift of consumers from buying music to renting/streaming it.  When this shift occurs (and it is a “when,” not an “if”), the impact on the artist, songwriter, label, publisher and the music industry as a whole will be significant.

It’s vital we address these issues now before we are left with more money being generated from the use of music than at any time in civilization with less and less of it going to the artists, songwriters, labels and music publishers.

The end result could be a strip-mined music industry in the wake of Silicon Valley IPOs and trillion dollar market caps.

You can view the vast amount of data and analysis that we’ve collected on Spotify and other streaming services here: