Facebook Lies, Cheats and Steals To Win The Video War

So Facebook is pushing video. This is no surprise to anyone. And glancing at the view count beneath the latest Buzzfeed “What Guys Think Girls Want When They Eat Exotic Foods While Thinking of Three Legged Dogs” video, you’d think Facebook is now beating YouTube at the video war. And it makes sense. Anyone can share a video to their own profile (taking over their friends’ Newsfeeds) with one click – accelerating the viral factor.

The professional YouTube creator, Hank Green, penned a Medium article in which he expressed his frustration with Facebook cheating its way to the top. You may sense the immediate bias because Hank has built his business on YouTube and now Facebook is challenging it. But he did make some interesting points about the difference between how Facebook and YouTube approach metrics (and self promotion).

“There are a few things that make me wary, not of their ability to grow my business, but of whether they give a shit about creators, which is actually pretty important to me.” – Hank Green, professional video creator

The headlines as of late have been dominated by Facebook’s claims that they now have 4 billion daily video views. And most in the tech media have touted that figure at face value. Even though YouTube hasn’t officially released current per-day view numbers for some time, they claim it’s in the billions.

But YouTube and Facebook define views very differently. Facebook automatically starts videos (silently) in your Newsfeed and counts a play if only 3 seconds is “watched” – even with the sound off. You can see how they are able to inflate these metrics. Let’s say you’re scrolling through your Newsfeed and pause on a comment written above a video that is auto-playing. You spend 4 seconds reading the comment then keep scrolling – BOOM you just got that video a view, even though you didn’t look at it, didn’t click it, and didn’t turn the sound on. Whereas every YouTube video has to be manually clicked by the user to play and YouTube only counts a view if people actually watch it – usually around the 30 second mark (but it varies depending on the length of the video).

Matt Pakes, a Product Manager at Facebook who specifically works on video, confirmed this. He commented on Green’s post: “If you have stayed on a video for at least three seconds, it signals to us that you are not simply scrolling through feed and you’ve shown intent to watch that video. However, we also provide detailed metrics and tools to help Pages better understand how people respond to their videos on Facebook.”

Duke University tested this. They posted a YouTube link on Facebook and the next day they uploaded the same video directly to their Facebook Page. Then compared the results. 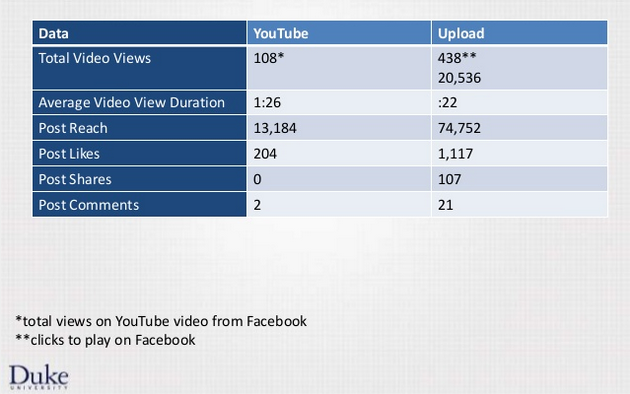 This video got 108 views (on Facebook) from the YouTube link embedded to Facebook and 20,536 “views” for the native video uploaded to Facebook. But the average duration watched for the native Facebook video was only 22 seconds whereas the YouTube embedded video average duration was 1:26. And note that (of the 20,536 “views”) only 438 people clicked the native Facebook video (to turn the sound on) but Facebook counted 20,536 views… because, like stated, a view is only 3 seconds long, auto started.

Some startling new research was released by Ogilvy and Tubular Labs:

Fullscreen CEO, George Strompolos tweeted last year that he regularly sees videos with 50 million + views on Facebook that were stolen from his creators (and sometimes these videos were stolen/reuploaded by other media companies).

Of course, this used to happen all the time on YouTube in its early stages, but the video behemoth has combatted this with its Content ID technology which crawls and identifies stolen videos based on identification software and will give the owner of the video/song the option to place an ad on the video to make money off of or rip the video down completely.

Pakes mentioned (in his comment on Green’s Medium article) that Facebook has had Audible Magic in place “for years to help prevent unauthorized video content on Facebook.” However, no creator seems to know about this technology and it doesn’t seem to be available to anyone (other than the biggest corporations giving Facebook the most amount of money). I haven’t heard of it. Obviously Hank Green (professional video creator) hasn’t heard of it. Multi Channel Network Fullscreen CEO George Strompolos hasn’t heard of it. So, if Facebook has had this in place for years why haven’t they opened it up (or publicized it)?  The only thing the average user can do now if you find your video uploaded/stolen by someone else, you can email Facebook and they may take it down a few days later – long after the views have tapered off. And you can’t search for videos on Facebook like you can on YouTube, so it’s nearly impossible to find stolen content unless it happens to pop up in your Newsfeed.

I did a similar experiment with one of my own videos, an acoustic performance video for my song “Ordinary Times.” I uploaded the video to Facebook and YouTube at the same time on a Tuesday. I didn’t post the YouTube link to Facebook. 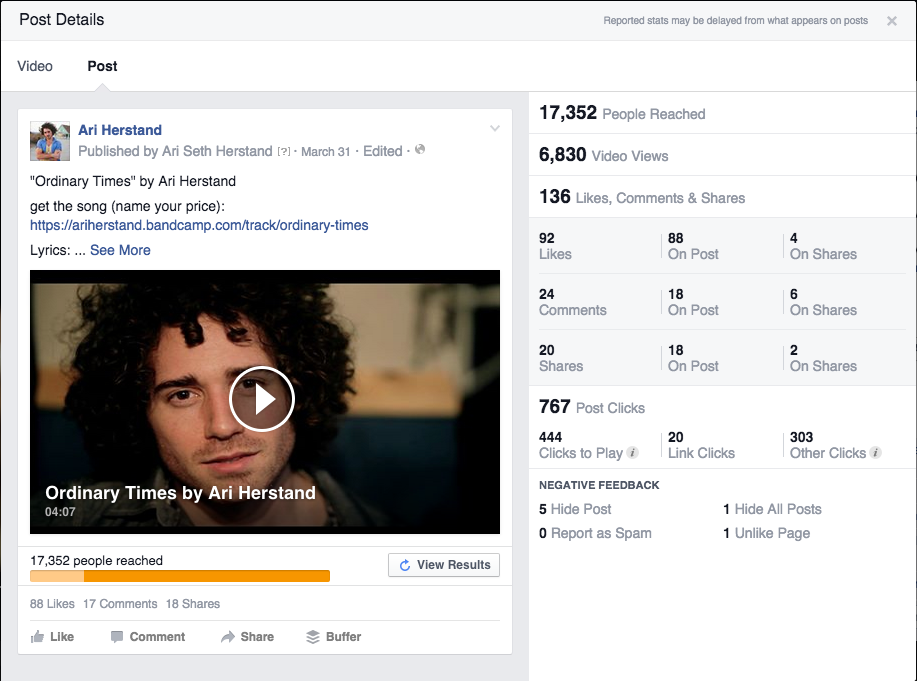 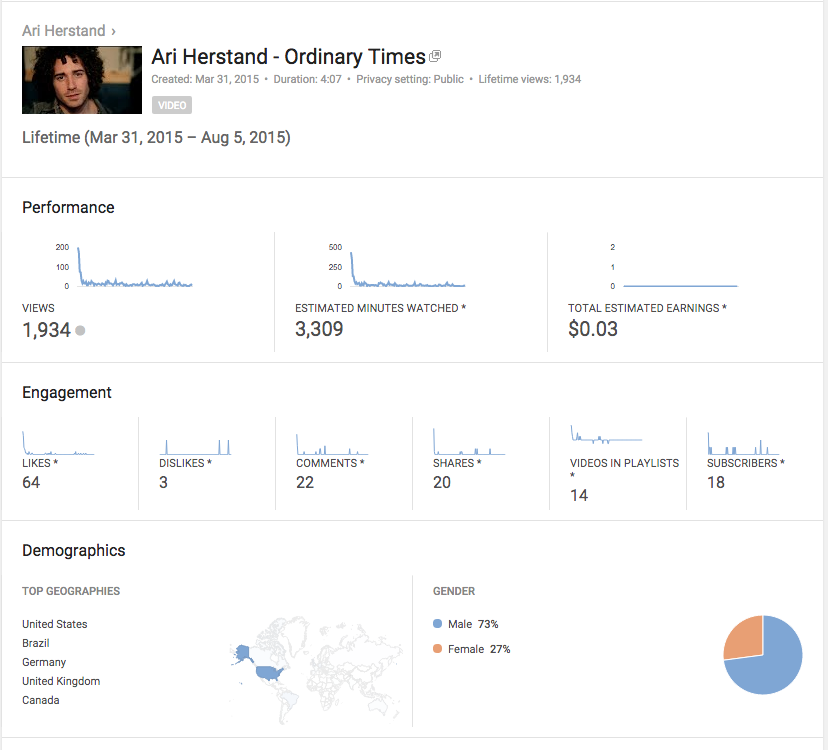 Off first glance it would seem that the video performed MUCH better on Facebook. So far, the video on Facebook has 6,830 views. And on YouTube 1,934 views. 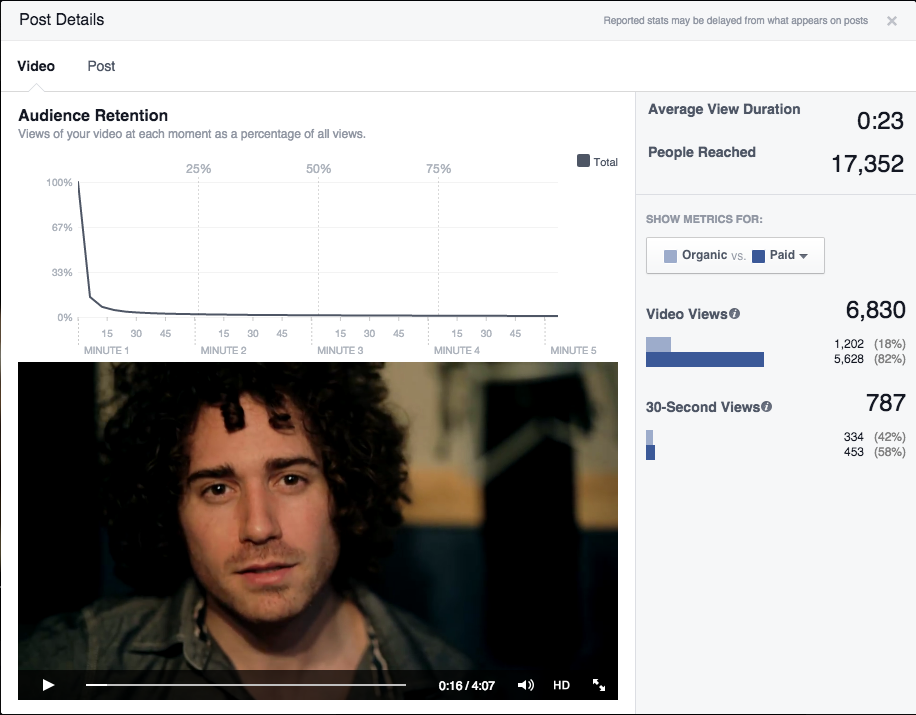 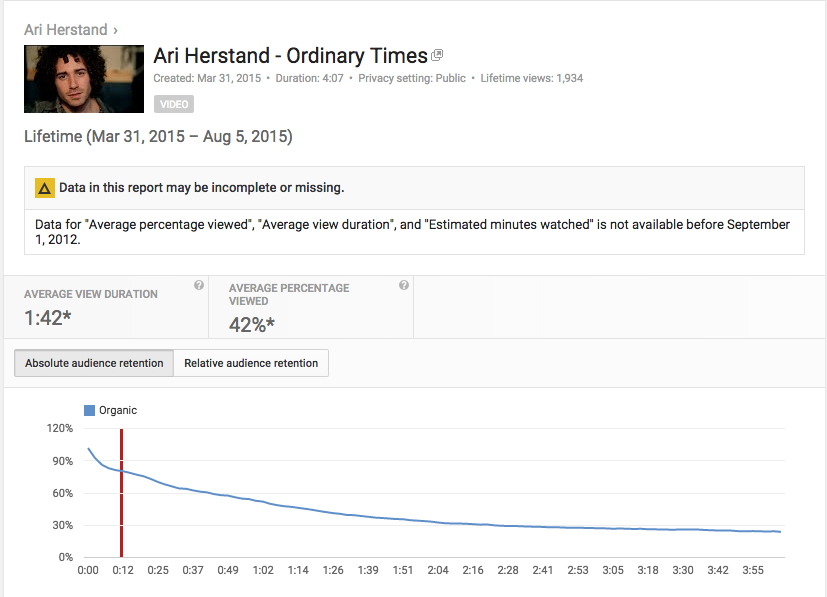 This metric is my own estimation as many of these numbers could be the same individual interacting with the video multiple ways (commenting AND liking AND sharing).

What is really interesting to see on YouTube (which Facebook doesn’t display) is how many views I get by country. Apparently people in 73 countries have watched my video. Somehow, people in Thailand have figured out a way to watch my video for longer than it lasts. The power of Massaman Curry! Mmmmm. 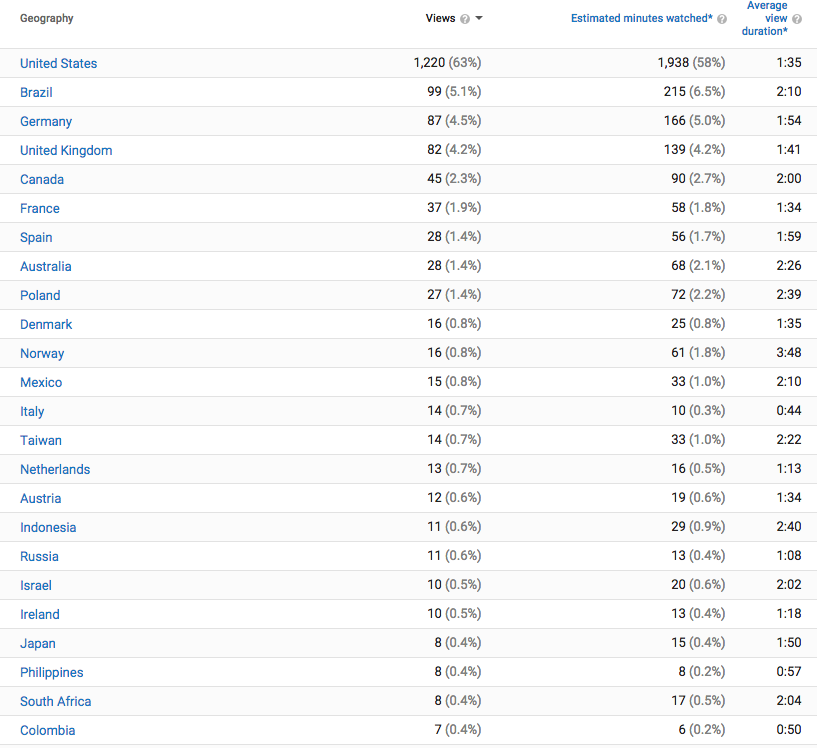 So what are we to do with this information? Well, continuing to pressure Facebook to be more transparent about their numbers is a start (it is nice that they do allow us to see full video analytics). But, for now, buying views on Facebook doesn’t seem to work very well – regardless if you’re paying for native Facebook views or a YouTube embedded link. There should be an option (and from what I’ve read there is for some companies) for Pages to buy only views past the 30 second mark. However, I haven’t seen this option in my advertiser settings. The current problem with advertising videos is that if you run 3 different ads targeting different demographics and you select the same video for each ad, the view counts don’t increase overall for the main video, but they start from 0 for each advertised video. Meaning, you’ll have the identical video on Facebook displaying 3 different view counts. Quite annoying when you’re trying to increase the overall view count on a single video.

As the largest social network on the planet, and home of 1/5 of the entire world’s population, you’d think Facebook would have been able to win the video war authentically, without such shady practices.