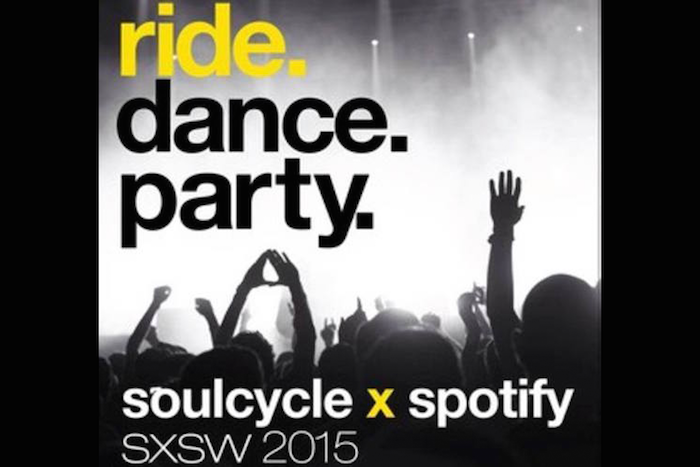 At this year’s SXSW, SoulCycle teamed up with Spotify and some of their favorite DJs at what was dubbed as “an epic music and movement experience.” While the popular fitness club’s trip to Austin underscores the importance of music to its business, it’s unclear if the music business is spinning to the same beat.

SoulCycle, launched in 2006, is now filing for an IPO. Its business is primarily based on offering a high intensity spin class led by an instructor who also serves as a DJ.  Take a class, glance at their website or read their S-1 filing and it is clear that music is perhaps as essential to their business as the bikes themselves.

SoulCycle’s SEC filing characterizes its product as a “carefully curated ‘cardio party’ [that] is fueled by the personalities of our instructors, their uniquely crafted musical playlists and the energy of the room” and says that “[w]ith inspirational coaching and high-energy music, SoulCycle was created to strengthen both the mind and the body.”  Their instructors go as far as to claim that music “is the most important part of what we do at SoulCycle.”

Like other growing fitness movements that actively incorporate music, SoulCycle is licensed by ASCAP and BMI, the two largest U.S. performing rights organizations (“PROs”).  The fees they pay fall under “general licensing,” an umbrella classification used by the PROs to cover bars, restaurants, hotels, concert venues, sports arenas and other businesses not classified as television, radio or new media.

General licensing has long accounted for a meaningful share of annual PRO collections.  In their respective 2013 annual reports, ASCAP and BMI collected a combined $1.88 billion of which $226 million was attributed to general licensing. This is in stark contrast to the less than $90 million collected from new media licenses in that same period.

And yet the debate these days surrounding PROs is almost entirely focused on their efforts to license websites, streaming music services and other businesses classified as “new media.” While no one questions the growth trajectory of digital services, the jury is still out on whether consent-decree bound PROs are best positioned to represent songwriters and their publishers in this arena.

General licensing, on the other hand, is an area where the PROs have a clear competitive advantage over both music publishers and potential new market entrants. To ensure that they retain this line of business the PROs should pay close attention to how they are managing this overlooked, yet lucrative income stream.  A quick review of the licensing and distribution methods surrounding SoulCycle illustrates opportunities across the broader category.

As part of its filing, SoulCycle listed total revenues of almost $112 million in 2014 based on 36 existing locations, with projected 2015 revenues of closer to $140 million. The filing predicts an expansion to 250 locations in the near future and thus, if per location revenue of $3.1M holds, the company is expecting annual revenues of at least $775 million.  Not only is revenue growing rapidly, but the company’s profit margins (23% in 2014) were described as “fat” in a recent New York Times article.

Currently, BMI’s music license for fitness clubs states that the maximum fee for a gym like this shall not exceed $2,123 per year. This fee represents .01% (that’s 1% of 1%) of a single location’s class revenue alone, barely a rounding error. Surely, this is an unusually low fee for “the most important part” of what they do.

At ASCAP, they also license SoulCycle and other fitness clubs on a flat fee, per location. While rates increase according to an inflation index, they do not take into consideration the premium fees paid by a SoulCycle member or the direct nexus of music and exercise at these facilities as opposed to background music heard at a more traditional health club or gym.

More broadly, looking at several different sources, fitness center revenue has increased over 104% in the US between 2000 and 2014, far outpacing domestic inflation, which has grown only 48% during that same period.

With respect to distribution, the procedures used by the PROs today are perhaps as inadequate as the licensing fees themselves. While technology makes it possible to track every song actually performed in any given spin class, general licensing revenues are not distributed with this data. Rather, the money received is put into a larger pool, and mostly distributed using a number of inaccurate proxies such as a sample of television and radio performances that overwhelmingly favors “Top 40” hits.

+Dear Artists, Your Royalties Have Now Been Frozen. Sincerely, Beatport.

The genesis of this allocation makes sense if you consider that, at the time this licensing category was originally created, there was no cheap, reliable method to track general licensing. Today, several companies, such as the tech startup Music Play Analytics, are producing inexpensive, unobtrusive and simple song identification technology on a B2B basis.  Requiring chain-wide music usage reports, in an easily digestible format, is hardly a burden to either party.

Apart from fitness clubs, many retailers, restaurants, hotels and other general licensees are increasingly personalizing their music offerings. This results in more songs from niche genres getting more exposure than ever before.  And nowhere is this truer than at SoulCycle where they have whole classes devoted to a specific artist, DJ or theme (like 90s hip-hop or 70’s funk).  Continuing to distribute these license fees by following a homogenized pop radio chart defies logic and underserves the vast majority of PRO affiliate songwriters and publishers.

It’s important to note that SoulCycle is not necessarily a “bad actor” here. They are simply paying the bill that is sent to them by the PROs. It is the responsibility of those organizations to realize the economic realities of this cultural phenomenon and increase their rates accordingly.

Of course, increasing fitness club revenues and improving distribution accuracy are not a panacea for the PROs, but they do represent actionable items that would make a very meaningful difference to songwriters.  Thankfully, the new leadership of both ASCAP and BMI have publicly stated their intent to innovate. But in order for them to thrive in this fiercely competitive environment, perhaps both organizations can clip in and start peddling along a bit faster.