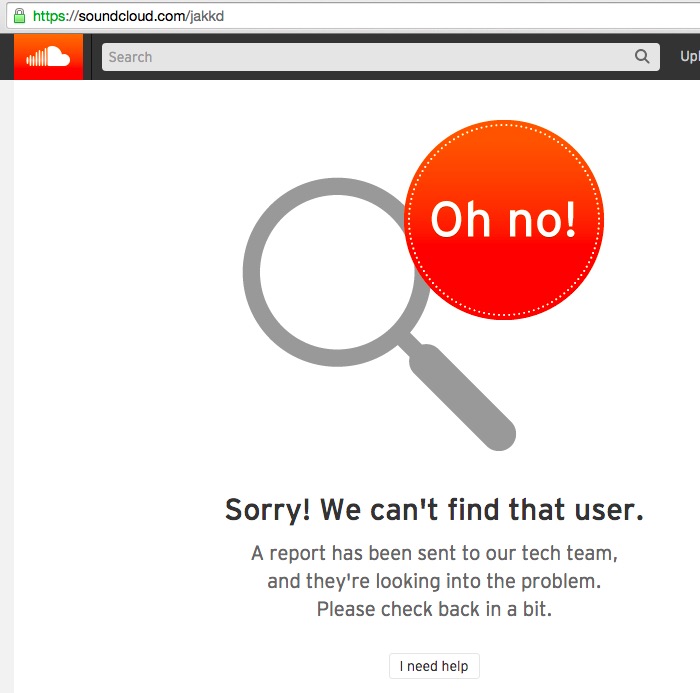 The following comes from JakK’D, a DJ duo from New England that just had their SoundCloud page removed after multiple warnings.

For real… Our JakK’D profile was taken down today ( inserting 45 sad face emojis right now ). We get it, you guys suck now as a platform, you think everyone is on this copyright infringement tip, but lets think back to old school hiphop, old school house music, fuck even rock songs sample each other ( & don’t get me started on country; No offense, some of it I can stand, but that shits copied more than a machine at staples ).

Lets be real for a second… If an artist wants to remix a song its the choice of the artist. If an artist wants to press charges for someone remixing without permission, that is a different story. But a lot of them take it as a compliment and love… Its the fat guys behind the scene who are angry.

SoundCloud is choosing to delete all of these for one simple reason; They are dead broke, and lost touch with why they created the site in the first place.  They are kissing the asses of Sony and Universal and so on in an attempt to keep themselves on the chart, but they are taking away form the people who got them there in the first place.  They are so caught up in trying to get back on top and get out of debt that they don’t realize by doing this, they are losing millions of views, thousands of artists, and hundreds of random people looking for new music.

What do I think is going to happen from this?  Downfall, just like cassettes replacing records and MP3s replacing CDs.  Sooner or later all these majors are going to attack everyone who even uses the same hi hat patterns or some shit.  People are going to get sued so even just DJing a track.

What do I think should happen to fix this?  Major companies getting their heads out of their asses and realizing were all working to make art and give back to the public.  I think a new form of ‘remixes’ or ‘edits’ should be allowed, but with rules; Not punished for being creative.  Oh I remixed Kanye or Drake?  BE HAPPY!  That means someone loved your sheeps music so much they wanted to add their touch to it!  They loved it so much they got a creative spark from it and ran with it.  It’s pretty hard to remix All Day or Back 2 Back and call it your own, when clearly everyone knows who it came from…

The only way the remixer is making a dime is by playing it in his set at a show or gig, or spitting a freestyle over the instrumental for a live audience.  You see it on TV all the time… Family guy copying the Simpsons, or South Park copying movies… Bringing real life events into made up show; Everyone uses everything. So why with music is it suddenly becoming such a bad thing?

It’s not like 1980 where you could rhyme simple things and play a simple riff and beat; We have to be advanced now because its all already been done.  So instead of punishing us for being creative; Why not praise us?  Why not give us some guidelines to follow so small artists can remix and bootleg?  Why not allow sample based music to rise like it has been…

Because I can promise this… If it doesn’t change, music is going to die.