Obama Handpicked This DIY Artist For His Spotify Playlist

The White House released a pair of Spotify playlists today curated by The President.  Alongside The Rolling Stones, The Temptations, Florence And The Machine and Justin Timberlake, sits a hard-working Philly based band doing it all themselves.

I first discovered Low Cut Connie at the Echo in East LA last year.  Playing to just over 100 people, they put on an incredible show, left a pint of blood on the stage and got me to buy all their merch.  I’ve been following them ever since.  You don’t go to a Low Cut Connie concert and forget the experience.  Because, it’s just that: an experience.  Front man, Adam Weiner, embodies Jerry Lee Lewis while he jumps, dances and pounds away at his upright piano (that LCC tour with).  And the rest of the group expel equal amounts of balls-to-the-wall energy.  Low Cut Connie just self-released their latest album Hi Honey (on their own label Contender Records).

They’ve been chopping away at America’s club circuit for years getting little victories here and there.  In 2012, Rolling Stone magazine ranked “Boozophilia” in the top 50 songs of the year (at #31 between Bruce Springsteen and The Beach Boys). Off of the success of that record, Jack White invited the band to perform at the grand re-opening of Third Man Records. In June, NPR included Low Cut Connie in the 10 Songs Public Radio Can’t Stop Playing list. And last month Weiner was given an audition-free slot on The Voice (after casting saw LCC YouTube videos), which he turned down – smart choice.

+This Musician Got An Audition-Free Slot On The Voice. Why He Turned It Down

But, that pales in comparison to being publicly recognized by the leader of the free world.

“When asked to pick a few of his favorite songs for the summer, the President got serious. He grabbed a pen and paper and drafted up not one, but two separate summer playlists: One for the daytime, and one for the evening.” – Kori Schulman, The White House 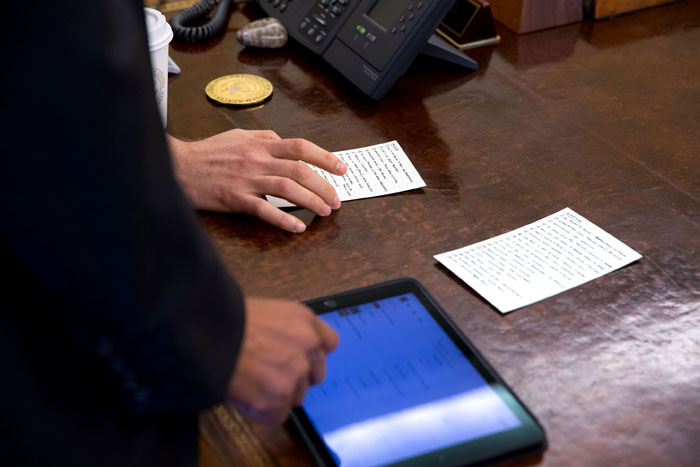 Due to popular request, here are my vacation playlists: http://t.co/uer5sIl4Vk http://t.co/zHEekHvQBr What's your favorite summer song?

I spoke with Low Cut Connie frontman, Adam Weiner, earlier today to get his reaction and see if he had any idea how The President discovered these blue-collar musicians. Weiner mentioned that a friend of his knows someone on the Obama team and told him that one of the 1st daughters turned their father onto the group.

“At first I thought it was a joke… then I realized that Obama’s got great taste and that he’s always for the little guy.  In this case Low Cut Connie is the little guy… and I couldn’t be more honored, humbled, or confused.  Thank you Mr. President,” Adam Weiner, Low Cut Connie

It probably didn’t hurt that the chorus gives a shoutout to “the south side of Chicago.”

Wondering what “Boozophillia” means?  Yeah me too.  Weiner explains, “I invented the word Boozophilia to refer to [my] attraction to ‘low life,’ dive bar and blue-collar culture that I’ve been toiling in for many years – traveling and playing music and [providing] entertainment in the grimiest and saltiest bars in America.  I wrote the song about all these lunatics and weird-balls and gorgeous individuals who populate dank barrooms all over the USA.  People with big hearts and busted up dreams and dirty jokes and so much love.”


Ain’t Too Proud to Beg – The Temptations

Live It Up – Isley Brothers

So Much Trouble in the World – Bob Marley

Hot Fun in the Summertime – Sly & the Family Stone

Wherever Is Your Heart – Brandi Carlile

Down Down the Deep River – Okkervil River

Shake It Out – Florence + The Machine

How Can You Mend a Broken Heart – Al Green

Nothing Even Matters – Lauryn Hill

The Best Is Yet to Come – Frank Sinatra

You Don’t Know Me – Ray Charles

I Found My Everything – Mary J Blige

The Very Thought of You – Billie Holiday