One of the biggest complaints of Spotify from music’s biggest fans is that the money they pay to the streaming service never actually reaches their favorite artists. If one of my fans with a $10/mo Spotify subscription plays my music exclusively for the month, it would make sense that that $10 should all go to me. But, of course, it doesn’t. It goes into the giant black box and Spotify divvies it up proportionately to ALL plays across the entire platform. This model favors only the songs that get played the most. And although more people sign up for streaming services every day (hello Apple Music) it seems the per-stream rate continues to drop thanks to this model.

+The More Money Spotify Makes, The Less Artists Get Paid

There’s no use in fighting the streaming model. It’s here. It’s not going anywhere. As indie artists continue to explore innovate ways to make up for the loss in revenue during the transition from sales to streams, Bandcamp just unveiled one possibility.

Launched in 2008 as a platform for artists to sell digital downloads directly to their fans, Bandcamp has continued to evolve, but has always stayed true to its initial vision: providing the best way for artists to make money from their fans in a friendly environment.

“As an artist, a subscription is great because it gives you predictable income and lets you connect directly with your most loyal fans.” Ethan Diamond, Bandcamp CEO

Bandcamp has been the favorite platform amongst indie artists and labels for some time now. Its “name your price” model revealed that fans would pay more if given the option. In fact, fans typically pay 50% more than the required minimum for digital downloads. With this model, someone paid me $200 for my last album and $20 for a single.

The best part about the new subscription service is that it integrates right into an existing Bandcamp site. There’s no extra profile you need to setup. It’s just another tab next to Music and Merch. You can still sell digital downloads and physical merch, but now will be able to offer subscribers a much more enhanced experience with exclusives, discounts (on merch and tickets) and unlimited releases.

You can offer your entire back catalog to subscribers along with all new releases. You can also release songs (like demos, pre-release tracks, live recordings and interviews) or other offers (like advance tickets, VIP experiences, limited edition items and merch discounts) exclusively for subscribers.

You can post messages (with accompanying photos and videos) directly to your subscribers. There’s a comments section which encourages camaraderie amongst fellow subscribers. You can of course join in on the conversation. Unlike Apple Music‘s clunky Connect platform, this messaging feature is quite intuitive and can be done from either the desktop or the app. 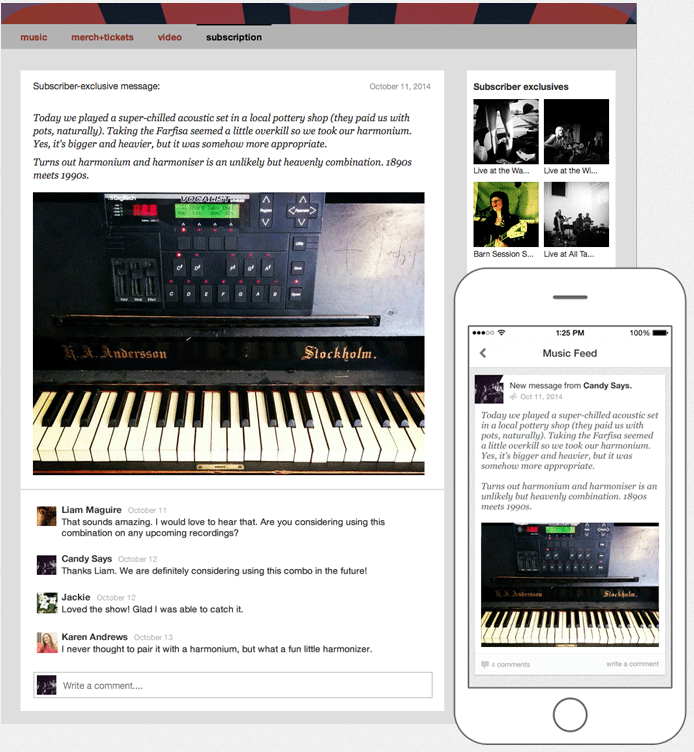 Bandcamp takes 15% plus a processing fee of 2.9% + 30 cents. But if you make more than $5,000 in the previous year, Bandcamp’s commission drops to 10%. Its main competitor in the fan subscription space, Patreon, takes 5% commission + processing fees of 2-4%.

+Time To Pay Attention: Creators on Patreon Now Receive Over $1,000,000 Per Month From Patrons

Because Bandcamp has lived, grown and evolved in the music space for 7 years, it has a much stronger handle on how best to serve artists (and fans) than Patreon. And because Bandcamp has earned artists’ trust (and catalogs), moving to a subscription model is painless.

The features offered in the Bandcamp subscription service are far superior than Patreon’s offerings. Is it worth the additional 10%? Possibly. Patreon was initially built for YouTubers, and although podcasters, bloggers and non-profits have come to Patreon in droves, traditional musicians (those who haven’t built up their base on YouTube) have, for the most part, held off. Amanda Palmer is the first artist of note to join Patreon (she currently has 6,000 patrons paying $36,000 per “thing”).

Continuing their tradition of giving artists as much autonomy on the platform as possible, Bandcamp is allowing artists to call the subscription service anything they’d like: Subscription, Community, Fan Club, Backstage, VIP membership, or anything else the artist can think of. 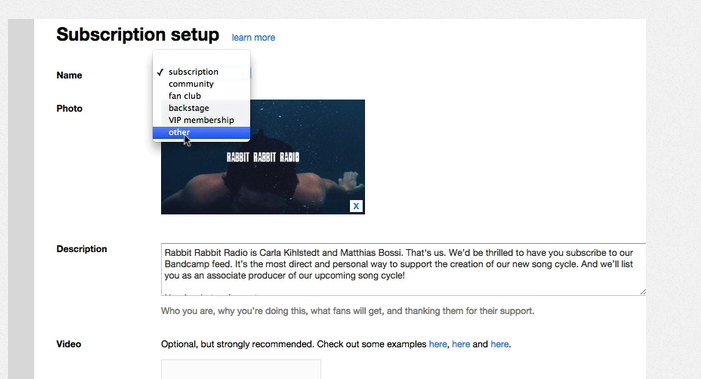 Unlike Patreon, Bandcamp has chosen to keep the amount an artist earns hidden – which is smart. Not every artist wants to publicly display how much money they’re making.

Artists #1 priority (after creating great music of course) should be coming up with ways to offer exclusive content and VIP access to their biggest fans. Because fans crave it and will pay for it. A Nielsen study from 2013 revealed that fans would spend up to $2.6 BILLION more a year for exclusive content and behind the scenes access. Startups like BandPage, PledgeMusic and now Bandcamp are capitalizing on this startling revelation.

Whether you want to run a PledgeMusic / Kickstarter campaign every couple years to raise a bulk amount of money for an album or maintain an ongoing, subscription/patronage with model via Bandcamp or Patreon, depends on the kind of artist you are. If you aren’t going to be releasing regular content (multiple times a month), a monthly subscription model doesn’t make much sense. After a few months of radio silence, fans may pull their subscription. However, one nice aspect to Bandcamp’s model (another notable contrast to Patreon) is that artists can charge a yearly fee. The yearly fee fan club can be used primarily to give fans early access to tickets, a place to hangout online, discounts on merch, access to exclusive VIP meet and greets, B sides/demos/live recordings and access to the entire back catalog.

Some artists are able to do both, successfully. Julia Nunes has a Patreon page (earning her $1,700 per video from 513 patrons) and has run two successful Kickstarter campaigns (2011 and 2015). She raised $134,403 from 3,258 backers for her 2015 campaign while she was simultaneously running her Patreon. 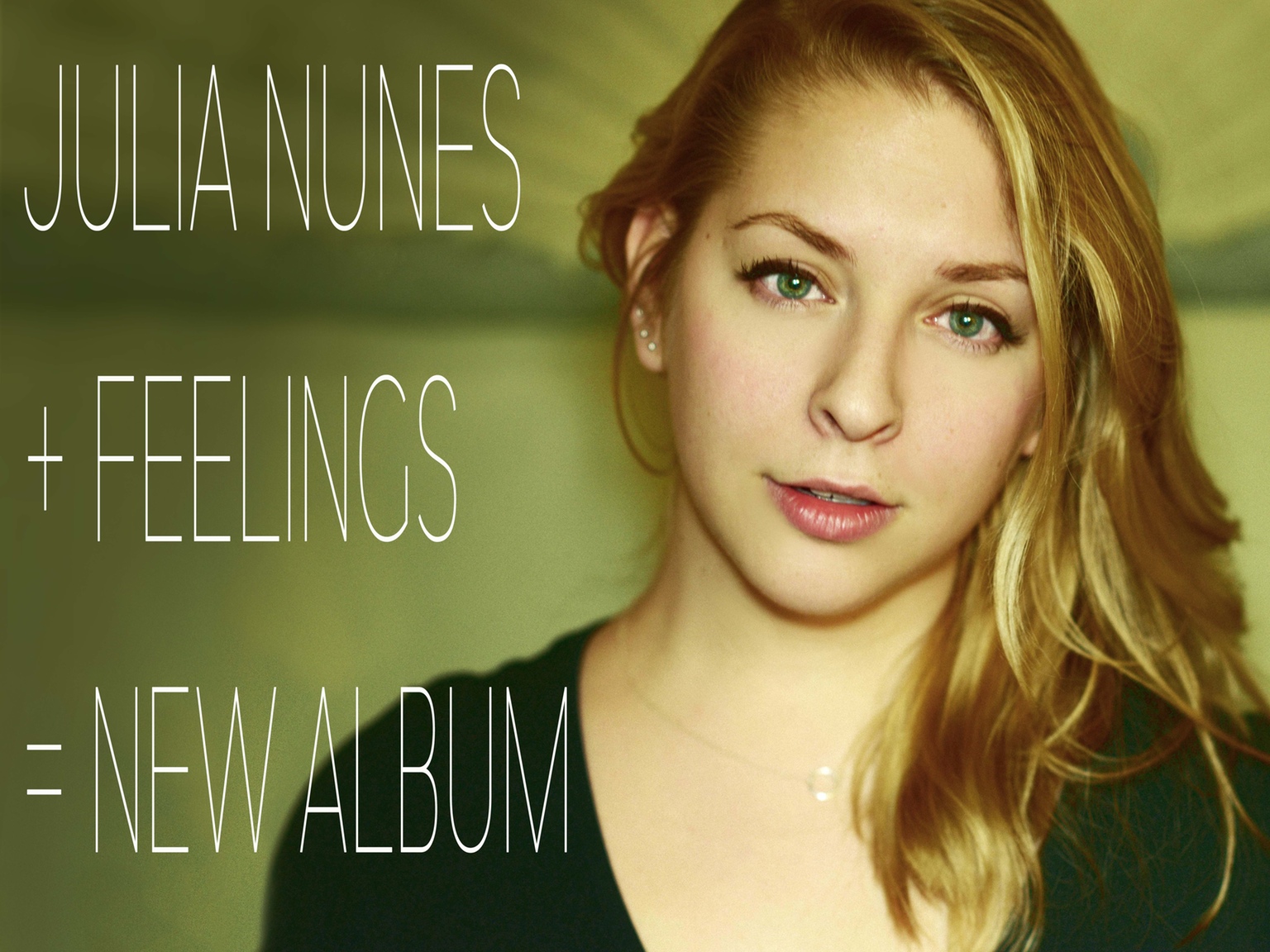 It’s best to put your fans on a Pyramid of Investment. The fans who stream your music, but never spend any money on you directly are at the bottom of the pyramid. Those who buy your music are one level up. Those who come to your shows are a level higher. Those who buy your merch are a level above that. Those who back your crowdfunding campaigns are another level up. The fan club members are yet another tier higher. And the fans who buy the high-priced, VIP experiences are at the top of the pyramid. You should give every fan, of every level, ways to support you financially.

Continuing the “name your price” model that Bandcamp popularized, fans can pay whatever they’d like above the required minimum of the subscription price.

“A few years ago we noticed many artists using Bandcamp to fulfill the digital piece of crowdfunding campaigns, so we asked them whether they wanted crowdfunding built right into Bandcamp. Their response surprised us. As they described months spent focusing on campaign rewards, the word we heard most often was “unsustainable.” At the same time, our own experience content.