Nearly 80% of Americans Are ‘Unlikely’ to Pay for Streaming Music, Study Finds

The finding, released by Nielsen to Digital Music News on Wednesday night, raises more questions about a streaming industry that simply isn’t attracting enough paying subscribers.  According to a just-concluded study involving nearly 3,500 Americans, 78% are ‘Somewhat/Very Unlikely’ to pay anything for a streaming service within the next 6 months, with 13% in a gray, unknown area.

That leaves 9% in the ‘Very/Somewhat Likely’ category, a nebulous number that may simply cover ‘churn,’ or the natural rate of existing subscribers that abandon their accounts (for any reason).

The Nielsen projection complements some extremely soggy figures released by the Recording Industry Association of America (RIAA) this week.  According to the stats, there were 8.1 million paying subscribers for services like Spotify at the midpoint of this year, a mere 2.5 percent increase over the same point in 2014.  That raises very serious questions on whether paid streaming subscription rates have already plateaued. 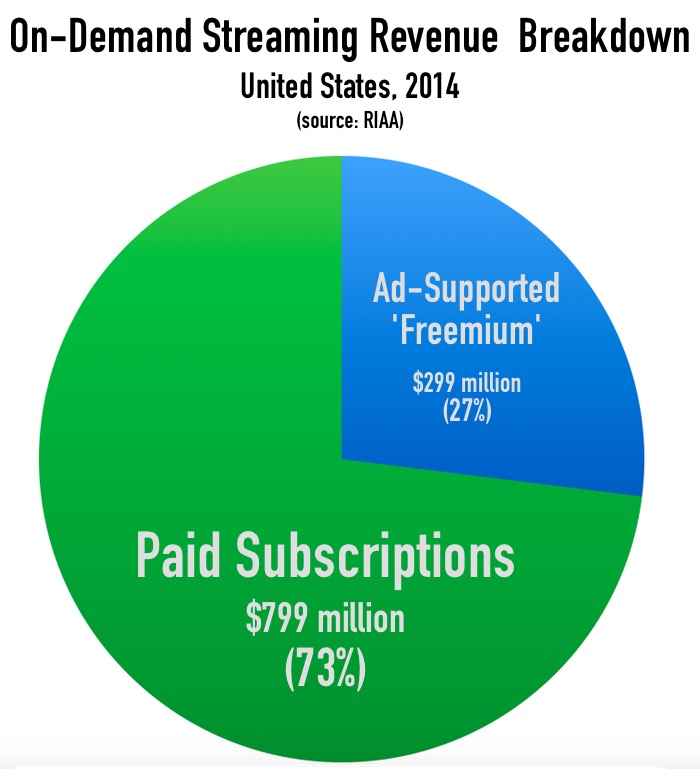 Financially, a plateau would represent a disaster for major labels Universal Music Group, Sony Music Entertainment, and Warner Music Group, all of whom have bet heavily on platforms like Spotify.  According to the RIAA, which represents the ‘Big Three,’ paid subscriptions accounted for 73 percent of total on-demand streaming revenues last year, with ad-supported, ‘freemium’ accounts woefully underperforming on the revenue side.

The Nielsen data highlighted two main reasons for not paying: (1) streaming services are charging too much, and (2) free services are good enough.  That puts the spotlight once again on YouTube, which is surging forward as the fastest-growing component of the streaming music sector, but is completely free.  According to earlier data also released by Nielsen, YouTube is now growing 60% faster than all other on-demand streaming services combined, including audio-specific platforms like Spotify.

The data now puts monstrous pressure on Apple Music.  The bug-riddled, bloated release may have as many as 15 million trial users, according to a New York Post report published Tuesday.  But that same report noted that at least 7.5 million of those users have already de-activated automatic credit card charging within their iTunes settings, which means they’ve already decided not to pay after their three-month accounts expire.

It’s unclear how many of the remaining trial users will ultimately decide to pay.