This Band Lost $3,000 At Their Record Release Show in LA

I need to start off by saying that an incredible album dropped last week. You should go and listen to Vulfpeck’s Thrill of The Arts right now. It’s funky. It grooves. It’s soulful. There are some fantastic guest vocalists on there. And guitarist Blake Mills (producer of my favorite album of the year, Sound and Color by Alabama Shakes) is on it.

Go listen to it on Spotify. Why? For the irony of course. The reason the name Vulfpeck sounds familiar to you is most likely because you heard about them through their “Sleepify” album. Remember that? These were the guys who put up a silent album of :30 second songs and encouraged their fans to put it on repeat at night while they slept. They made $20,000 before Spotify took it down claiming it was against their terms of service.

This stunt got people to actually check out their real music – and it’s pretty darn good. Vulfpeck just raised $55,000 from 1,673 backers on Kickstarter for their new album which they released this past Friday night to a sold out crowd at the 600-cap Teragram Ballroom in downtown LA.

Vulfpeck is an odd band. They don’t seem to handle any of their business the “right” way. Or any way that’s been done before. They are unapologetic music nerds who pride themselves on groove, tones and musicianship. And seem to throw a middle finger at the business (of music) at every chance they get.

At the show, the two front men, Jack Stratton and Theo Katzman traded off between drums, guitar and keys. Stratton cracked music-nerd jokes all night, referencing the kind of pickups his tricked-out strat had and how it was going straight DI (you could hear every guitarist in the room collectively gasp). He bombastically yelled through the mic asking Katzman if there was compression on his mic. When Katzman shot back “yeah” Stratton yelled “liar!” Katzman played a guitar solo consisting of 5 notes but he sold it like it was the greatest solo ever performed and made some crack about the kid in jazz band who does that. Then he made a joke about counterpoint (I studied that sh*t for two years in college and he triggered my PTSD). He yelled “who here was in jazz band.” Deafening roar.

The new Vulfpeck record is super tight. The live Vulfpeck show was not.

Sure, they are great players and played the songs well, but the show was all over the place. There didn’t seem to be any rhyme or reason to the setlist or much flow to the show. They had a bunch of special guests who sat in with them, but no one seemed to show up on time or knew what they were doing. One guest singer who they called to the stage 3 separate times before she actually made it to the stage had apparently flew in for this show and just landed at LAX. She finally got on stage only to sing inaudible backup vocals. All that for this? We all expected at least a solo of some sort.

The sound in the room was alright. It’s a state of the art system (the venue is only 3 months old) and the sound engineer was doing the best he could – without knowing the band’s setup, special guest lineup or instrumentation they were using from song to song. The band should have brought their own sound engineer for such a huge show like this. And they should have rehearsed their set, in order, with changing instruments, to help the flow.

Putting a great show together takes a lot more than just learning the songs. You have to craft a set list that fits the room, the audience and the occasion.

Their stage banter was right in line with their odd personas. Stratton at one point told Katzman to discuss his Dvar Torah (the teaching of the week’s Torah portion). They describe themselves on their website as “a half-Jewish post-geographic rhythm section”, which, if you go to their website, note that it has, in fact, loaded properly – the text-only website is their official site. But, it’s right in line with their Kickstarter video. Which is also off the f’ing wall.

Unoriginal, they are not.

The best song of the night, by far, was when Vulfpeck brought out jazz/soul singer Charles Jones to sing “Game Winner.” They also brought the opener, Joey Dosik, back out on the rhodes (Dosik actually wrote the song). Jones has so much power, control, passion and flexibility with his voice that he puts every American Idol contestant (and winner) to shame. He was so good that it was a bit disappointing he only sang two songs – he should have been up there the entire night.

Blake Mills, also in the house, came out towards the very end of the set and treated the room to his guitar prowess.

The crowd erupted when Vulfpeck started their most popular song (nearly 1 million plays on Spotify), “1612,” only to be quite disappointed that they replaced the lead vocals with a saxophone (Why wasn’t Jones back up to sing it?!). Theo Katzman also has some pipes on him as well, but instead of him singing it, they replaced the vocals with a Richie Cannata-like saxophonist. He was exceptional, sure, but how can you omit the vocals to your most popular song at your biggest headlining show to date? And they did it for their 2nd most popular song too, “Wait for the Moment.” Santana doesn’t sing either, but he hires vocalists to sing the parts. If Santana can’t get his special guests like Rob Thomas, Miguel or Dave Matthews to the show, his hired vocalists sing the part – he doesn’t just play the melody.

The crowd, undeterred, belted out what words they could remember for the two songs.

The highlight of the night was “Christmas in LA,” another stand out from the new record. Stratton lead the room in a three-part harmony sing-a-long. Not hard for the crowd of mostly music majors. He intro’d the song saying that this is not to be confused with the song with the same name by Dawes. Actually it’s by The Killers (feat. Dawes). But members of Dawes were in the house, so might as well give them a shoutout.

After the show I went to the giant merch table in the front lobby to buy a vinyl. But much to my surprise, not only was there no vinyl (they have some for sale on their online merch store), there weren’t CDs, t-shirts or any other merch other than an 11×17 release poster. AND there was no merch seller. There was a handwritten sign that read: “SHOW POSTER $20 (cash only) (HONOR SYSTEM). Joey Dosik Vinyl – $20” There was a shoe box with a cut out hole on top for people to slip in cash.

Earlier in the show, Stratton mentioned that they were running a social experiment with this honor system. I thought it was a joke. 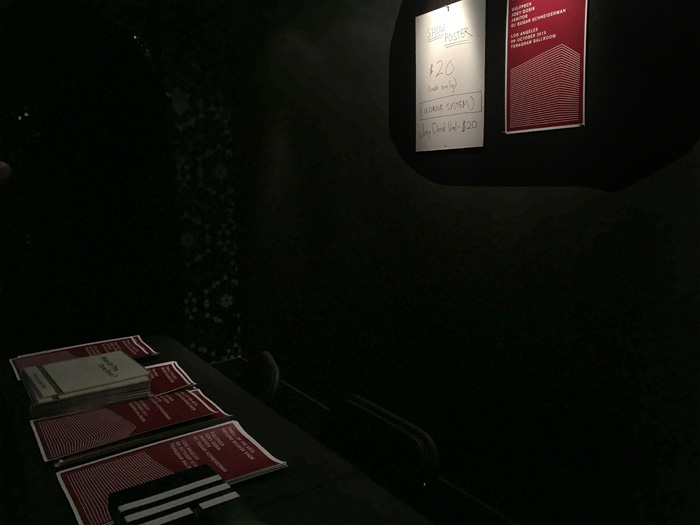 Joey eventually came behind the merch table to warmly greet fans and sign his records. I tried to buy one, but he was all out! He’s local to LA. It’s not like he ran out on tour and the vinyl plant got backed up. The #1 rule of show merch is don’t run out. It seemed that he just didn’t bring enough. Which cost him my $20 (and I’m sure much more).

But Vulfpeck were the ones who left the most money on the table. At one point in the show they complained about their deal, stating “Ticketmaster are the true scoundrels. They take 20% of every ticket. We only get $10 a ticket.” Which, is insane for a $27.40 ticket (after fees) for a sold out show at a 600 cap club.

“Ticketmaster are the true scoundrels. They take 20% of every ticket. We only get $10 a ticket.” – Vulfpeck

But guys, if you are looking for ways to make more money on your shows, merch is it! The tour merch tracking platform AtVenu informed me that for 500-1,000 cap venues, the average $ per head is $3.65. That means, 600 people multiplied by $3.65 = $2,190 was left on the table by 1) not having much merch, 2) not having a merch seller (for this large of a crowd they should have had at least 4 working the table), and 3) not taking credit cards (when Square, PayPal and Amazon offer free swipers for your phone there’s no reason not to take credit). Because who carries cash anymore?

Fans want to give artists money. It makes them feel good to support people who bring joy to their lives. And especially after a concert when everyone is on a collective high after going through a beautiful, communal experience, people are ready (and willing) to give lots of money. In the form of merch purchasing, of course. I’ve run out of shirts on tour before and people at the merch table always tell me they’ll just go buy it online (when I don’t have their size at the venue), but of course they never do. The buzz happens at the show. People are ready and willing at the show. Once they step outside the venue, the magic is gone. Every inch further away from the merch table, the less inclined they are to buy. And when they’re back home, all cozy beneath their covers watching Narcos, they’re not clicking through to your website to figure out how to buy your shirt or vinyl. They’re thinking about how Pablo is going to evade the Gringos.

People are ready and willing at the show. Once they step outside the venue, the magic is gone. Every inch further away from the merch table, the less inclined they are to buy.

It’s totally unacceptable (from a business standpoint) to not have records for sale (CDs or vinyl) – especially at your record release show. Vulfpeck just made $55,266 on Kickstarter. That’s more than enough to print up some vinyl and CDs. Yes vinyl turnaround times are brutal. Believe me, I know. I went through it for my last release – was nearly 5 months from sending in the final masters/artwork to having them arrive on my doorstep. But that’s why you don’t book your record release show before you know when the records will arrive.

Yeah, these guys (by their own acknowledgement) made $6,000 in ticket sales on the night and probably a couple hundred in poster “sales.” But why leave money on the table? Why not sell merch? Why not offer 10 VIP meet and greets via BandPage for $100 (that doesn’t have to be split with the venue or Ticketmaster)? That’s an additional $1,000 – believe it or not, these sell very well for small-mid level bands.

And Vulfpeck, I know you guys are reading this thinking, “who is this Ari as$hole? Let’s find him and give him a stern talking to.” I’m a fan. A musician. A fellow band geek. And someone who understands the importance of being smart about your business at every stage of your career. Because an additional $3,000 could have helped you buy better gear, invest in tour expenses, make a music video or pay for advertising and PR to promote your stellar new album that the world should hear.

Ari Herstand is a Los Angeles based musician and the creator of the music biz advice blog, Ari’s Take. Follow him on Twitter: @aristake or Instagram: @ariherstand