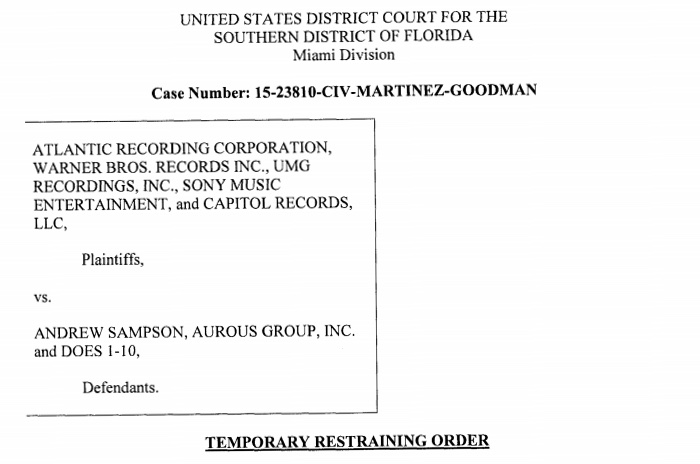 Update, Friday AM: Aurous has now pulled all available downloads from aurous.me following the court order; Aurous founder Andrew Sampson has confirmed the yank-down in a tweet this (Friday) morning.

The following is the story we published Thursday afternoon, immediately following the court-issued temporary injunction.

The order, signed by US District Court judge Jose E. Martinez at 2:20 pm ET today (Thursday), orders Aurous to halt all further distribution of its application, including on aurous.me.  The ‘Temporary Restraining Order,’ means removing all available downloads immediately from aurous.me, under penalty of the court.

The order, received by Digital Music News this (Thursday) afternoon, comes less than two days after Universal Music Group, Warner Music Group, and Sony Music Entertainment filed suit against Aurous in federal court, and less than a week after Aurous launches its ‘0.1 alpha’ version.  “Plaintiffs’ motion for a Temporary Restraining Order is GRANTED in part as set forth herein,” the court order declares.  “The motion is otherwise denied.”

“According, IT IS HEREBY ORDERED that, pursuant to 17 U.S.C. § 502 and Federal Rule of Civil Procedure 65(b), Defendants and their officers, agents, servants, employees, attorneys, and all persons who in active concert or participation with each or any of them, or who are aiding or abetting their conduct, are hereby RESTRAINED and ENJOINED until further Order of this Court from infringing, or causing, enabling, facilitating, encouraging, promoting and inducing or participating in the infringement of, any of Plaintiffs’ copyrights protected by the Copyright Act, whether now in existence or hereby created, including but not limited to, by (a) making the “Aurous” software application, whether in desktop or mobile versions, including applications running on the iOS or Android operating systems, available for download or use; and (b) allowing the transfer to any person of any or all domain names or URLs through which Defendants infringe Plaintiffs’ copyrights (including, without limitation, aurous.me).”

As of 6:30 pm ET, aurous.me remains live, with the BitTorrent-based streaming application available for Windows, Mac, and Linux platforms.

The order isn’t a permanent injunction, and would permit Aurous to continue distribution and dissemination if cleared in court.

More as this story develops.  Here’s the order: