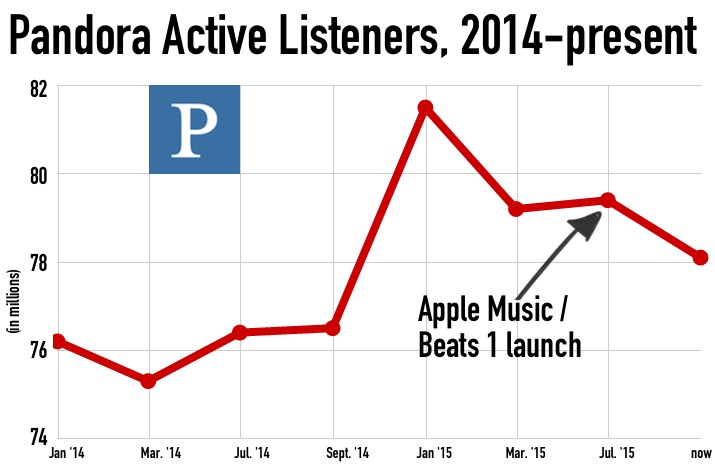 Beats 1 DJ Zane Lowe said he wasn’t quite sure how radio fits into the broader Apple Music strategy.  Perhaps Apple executives can think of 1.3 million reasons why this is a perfect fit.

Enter Pandora, which has been getting brutalized on Wall Street following some troubling financial disclosures.  Pandora CEO Brian McAndrews downplayed the impact of Apple Music and Beats 1 during a conference call with investors on Friday, after initially dismissing the threat as merely “short term” and in-line with Apple’s earlier radio expansion in 2013.  “This was obviously a unique quarter in the streaming music business,” McAndrews said.


“But I’m pleased to say that, given the scale of press and consumer attention on this launch, the impact on our active users and listening hours was muted and was, in fact, consistent with what we experienced during the launch of Apple’s radio service in 2013.”

‘Muted’ indeed: over the past three months alone, Pandora has shed 1.3 million listeners, to 78.1 million (as of September 30th, 2015).  Meanwhile, Apple has amassed more than 15 million trial users, with 6.5 million paying subscribers, not to mention accompanying surges in Beats 1 radio listening.  Sounds like a problem, though time will tell: during the call, Pandora noted that listening hours actually increased 3 percent to 5.14 billion despite the dip.