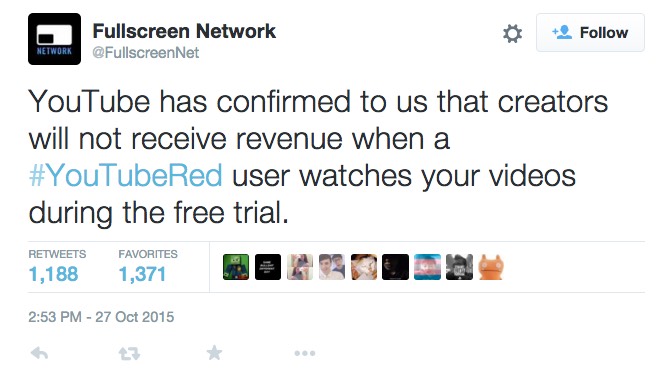 YouTube Red, YouTube’s ad-free, premium service is launching right now (October 28th) with a one-month free trial.  The only problem is that nobody knows if creators are getting paid during this trial period.

Yesterday, YouTube flatly told one of their largest partners, FullScreen, that they wouldn’t be paying anyone during their free trial window (see above).  “YouTube has confirmed to us that creators will not receive revenue when a #YouTubeRed user watches your videos during the free trial,” the company confirmed within hours of Red’s debut.

We’re not clear if the free trial is part of the YouTube Red contract (chime in if you’re signed something, or haven’t).
Predictably, the FullScreen tweet is pissing off a lot of people, which is exactly happened when Apple Music tried the exact same thing during its three-month trial window for Apple Music.  Apple faced a torrent of complaints from indie artists, but refused to pay until Taylor Swift made a huge stink.


This morning, YouTube executives might be taking a lesson from that free mistake.  According to BBC article posted after Red’s launch, YouTube is now planning to pay creators, though neither YouTube nor Google have confirmed this.  “Prominent YouTube stars had expressed concerns that they would not be paid if their videos were watched during the month-long free trial on offer,” the BBC reported.  “But Google is expected to confirm that is not the case later.”