PewDiePie: Adblock Is the Real Reason YouTube Red Was Launched

YouTube’s freshly-launched paid service, YouTube Red, is largely a reaction to the surging use of ad-blocking software, according to YouTube’s biggest star.  “I think what many people still don’t realize is that… YouTube Red exist[s] largely as an effort to counter Adblock,” PewDiePie blogged.  “Using Adblock doesn’t mean you’re clever and above the system,” the post continued. 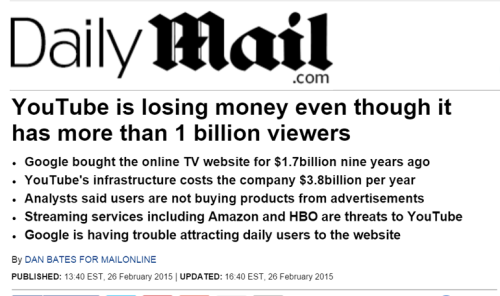 The very giant problem, according to PewDiePie, is that YouTube still isn’t making a profit despite having more than 1 billion viewers.  “Well, despite YouTube being a huge website, YouTube still isn’t profiting,” PewDiePie bolded, while citing a Daily Mail article.  “If you read through all those bullet points, the answer behind YouTube Red’s existence becomes a lot more clear.”

“And it’s not unlikely that it will keep growing.”

PewDiePie, whose real name is Felix Kjellberg, has amassed a channel following of more than 40 million, a figure that eclipses bigger ‘real world’ superstars like Justin Bieber and Rihanna.  That’s a huge amount of ads, though Kjellberg pointed to a rapid ramp-up in the use ad-blockers, and queried his own Twitter following to prove the case.  “I can also confirm with my own Google statistics 40% is a correct estimate,” PewDiePie noted.  “It’s a number that has grown a lot over the years, from roughly 15-20% when I started.  And it’s not unlikely that it will keep growing.”

“But for smaller channels, this number can be devastating.”

But is that stealing?  Kjellberg was very careful not to attack his fans, but sought instead to focus on the impact felt by smaller YouTubers.   “What this means is that YouTubers lose about 40% of their ad income,” Kjellberg continued.  “Personally, I’m ok if you use adblock on my videos.  Ads are annoying, I get it, I’m not here to complain about that.  But for smaller channels, this number can be devastating.

“Despite this, it seems that many people’s general attitude towards Adblock is very open loose.”