Updated: Victory Records Is Suddenly Back On Spotify 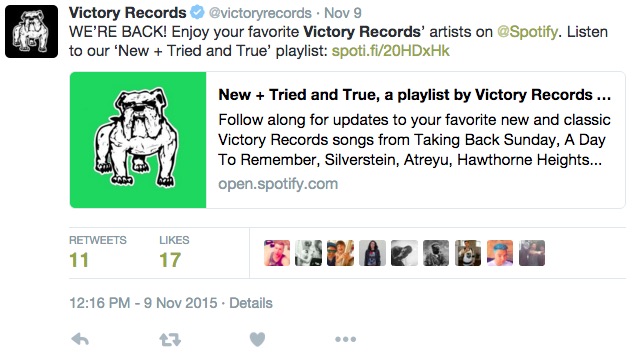 Last month, Victory Records declared war on Spotify over potentially unpaid royalties, only to find their entire catalog removed from the platform. Last week, Victory Records founder Tony Brummel pointed to potentially disastrous financial consequences for his label as a result of the teardown, including possible layoffs.

In that soup of events, Victory Records’ entire catalog was actually being re-uploaded onto Spotify.  Quietly, on November 9th, Victory tweeted that Spotify streaming was now re-enabled.

“We’re glad to have our content back on Spotify, and that we came to a good resolution that works for everybody, ensuring that our fans can listen to the music they love on Spotify and that all of our artists and songwriters are paid for their work.

In regards to the ‘layoffs’ comment – that was a rhetorical one.  If anyone had went to the job section of our website that would have been glaringly evident.  We have over 10 positions posted as we continue to add to and bolster our 34 person team.  As many independents have sold their companies in the past year – Century Media, Fearless, Infectious, Razor and Tie, Rise, Vagrant and others, we continue to build.”