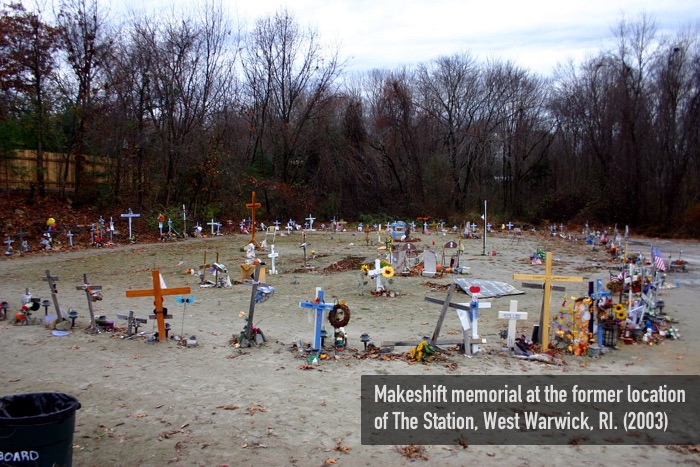 It started with an illegal pyrotechnics display that torched some highly-flammable insulation.  The resulting inferno at The Station in West Warwick, Rhode Island killed more than 100 fans, many of whom died from smoke inhalation and trampling while desperately trying to escape the club.

Now, Jack Russell, the lead singer of the band they all came to see, Great White, is planning to film a documentary about the tragic evening.

“I never got the chance to say I’m sorry.”

According to an interview conducted by Portland, Oregon radio station 105.9 The Brew, Russell is now putting the wheels in motion on the film, despite protests from family members of the deceased and injured.  “I never got the chance to say I’m sorry,” a guilt-stricken Russell relayed, while noting that his lawyers advised him against apologizing to avoid liability.

Thirteen years later, Russell is still touring, but suffers from survivor’s guilt.  “I ask myself, why did I get to live while so many other people died?” Russell questioned.  “I feel guilty for people coming to see me play and losing their lives.  It’s really hard to deal with it.”

Scars remain back in back in Rhode Island, where victims and their families are undoubtedly mixed on news of the project.  “His career is tanking and he’s not welcome here in the New England area at all, so he’s looking to get back in everybody’s good graces,” survivor Gina Russo told the Providence Journal.   “He’s looking for forgiveness from a lot of people. In my world he doesn’t warrant any forgiveness.”

Russell wasn’t charged in the tragedy, but laid blame on local fire inspectors.