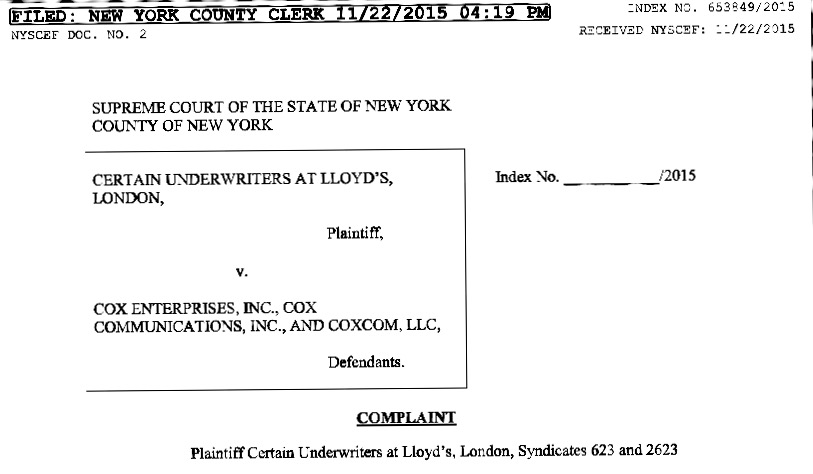 Last week, a federal judge ruled that Cox Communications was no longer protected against copyright liability by the Digital Millennium Copyright Act (DMCA), a stunning blow not just to Cox, but the entire internet access industry.  The reason, according US District Court judge Liam O’Grady, is that Cox has simply refused to adopt a policy of terminating repeat infringers, a key qualification for receiving DMCA protection.

Now, in the wake of that ruling, Cox is getting sued by various underwriters at Lloyds of London, who are now refusing to insure Cox for potentially tens of billions of dollars in damages that could result.  The underwriters have now filed paperwork with the New York Supreme Court in hopes of nullifying any possible claim based on Cox’s intentional negligence, and avoid holding a very, very expensive bag.

The principle at play is pretty simple: insurers only insure when the terms are adhered to.  Crashing your car while drunk, forgetting to moor your boat, or failing to disclose a pre-existing medical condition are all actions that can render a policy moot.  In the world of corporate insurance, similar principles apply, and Lloyds is now asserting that Cox behaved against the terms of their liability insurance plan.  The only difference is that Lloyds is taking action in court, based on disagreements brewing.

“Cox did not change its policy and practice; it continued to intentionally ignore and not forward notices from Rightscorp…”

Enter Rightscorp, the controversial copyright enforcer (and DMN partner) that has been sending hundreds of thousands of notices of alleged copyright infringement to Cox over the years, with most flat-out ignored.  That paper trail, according to Lloyds unit Beazley, demonstrates intentional negligence, and grounds for nullifying any coverage.  “In October 2010, Cox made an intentional business decision not to forward certain infringement notices to its customers and not to terminate or block those customers’ accounts,” Lloyds argues.  “A year later, Cox intentionally decided to block receipt of and ignore those notices.”

“Cox did not change its policy and practice; it continued to intentionally ignore and not forward notices from Rightscorp on behalf of BMG and Round Hill and intentionally did not terminate or block the accounts of its customers allegedly infringing BMG’s and Round Hill’s copyrights.”

Attorneys at other mega-ISPs, including Comcast, Time Warner, and Verizon, may also be checking the terms of their policies in the wake of Cox’s dilemma.  That’s because if Cox ultimately loses its cases against content owners Round Hill Music and BMG Rights Management, a cavalcade of copycat suits are likely to follow, with massive changes roiling through the internet access industry – and, the internet as a result.