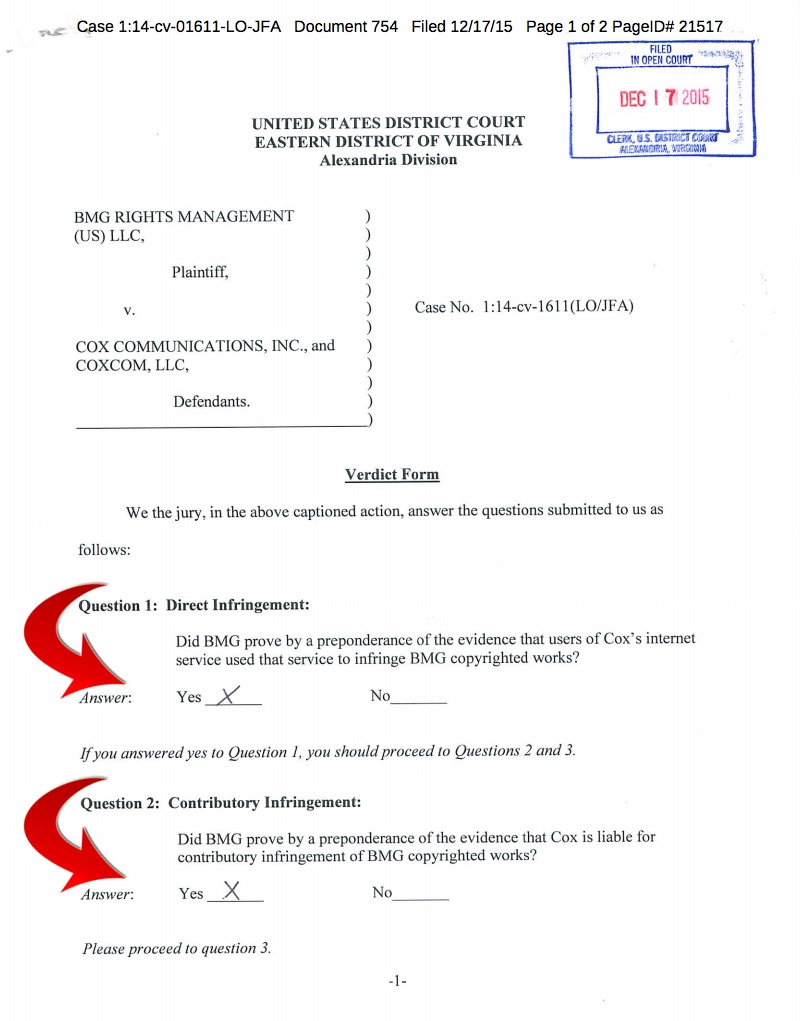 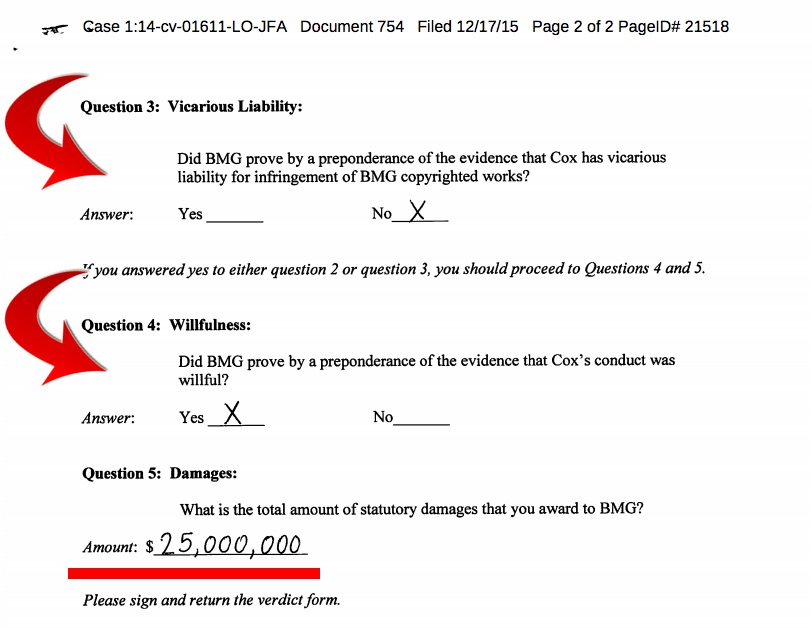 Updated: 3 pm PT; 6 pm ET to include Cox statements on the ruling.

Cox Communications is one of the largest broadband ISPs in the world.

Cox Communications just lost one of the largest copyright infringement lawsuits ever litigated.

The Virginia-based access provider has been embroiled in massive litigation over its customers’ illegal downloading for the past year, with arguments see-sawing over whether Cox should be liable.  Cox, like many other ISPs, has argued that it merely offers a passageway to the internet, good or bad, and its compliance with the Digital Millennium Copyright Act offers it ‘safe harbor’ from illegal downloading and sharing.

Ultimately, the court found the situation to be more complicated than that, with Cox now ruled guilty of both contributory and willful contributory copyright infringement by a federal jury.  The jury award is $25 million, though that probably represents a small prelude to damages that could ultimately push into the hundreds of millions.

Cox is preparing its response, including an outright appeal.  “We are unhappy with the decision, will review the ruling in detail and are considering our options, including appeal,” a Cox spokesperson tersely relayed.

Signs of trouble first started appearing this fall.  Cox has been battling litigation from publishers BMG Rights Management and Round Hill Music for more than a year, though the ISP was just recently stripped of its DMCA protections by a US District Court judge.  That momentous decision was prelude to another bombshell: reams of internal emails between Cox ‘abuse managers’ revealing a calculated strategy to keep high-paying repeat infringers on its network, regardless of the behavior.

Now, lots of big guns are being pointed in Cox’s direction.  Just last month, underwriters of Lloyds of London took legal action to remove their liability obligations to Cox, based on ample evidence of negligence and disregard for copyright infringement violations.  That case is just getting started in New York, though it could leave Cox holding a very large liability bag.

A brigade of rights owners are also standing ominously on the sidelines.  “We believe this decision sends a message to ISPs that they have a responsibility to act upon and limit the massive copyright infringement using their networks that has been brought to their attention by copyright owners,” warned Michael Allen, partner at BMG law firm Steptoe & Johnson.  Now, the question is what penalties await those that have historically neglected those responsibilities, starting with Cox.

The decision also marks a major win for heavily-attacked Rightscorp, a copyright bulldog (and DMN partner) that is now proving that it has some serious bite.  Throughout the dogged litigation, Cox routinely dismissed Rightscorp as a hack copyright patrol, while refusing to forward tens of thousands of Rightscorp notices to offending subscribers.

That turned out to be a critical mistake, as trashing (or auto-deleting) Rightscorp notices was found to be part of a pattern of side-stepping DMCA takedown requirements.  Most importantly, Cox was found negligent when it came to dealing with  ‘repeat infringers,’ a core requirement of the DMCA.   In dirty internal email after dirty internal email, Cox employees decided to ‘terminate,’ then immediately reinstate, offending users, with the strategy that this would technically qualify as a DMCA ‘response’.

The subterfuge didn’t pass the judicial sniff-test, with Cox now subject to not only a $25 million fine, but potentially hundreds of millions in future legal actions from a giant class action of content-owning litigants.