55% of Americans Prefer Their Music through Computer Speakers 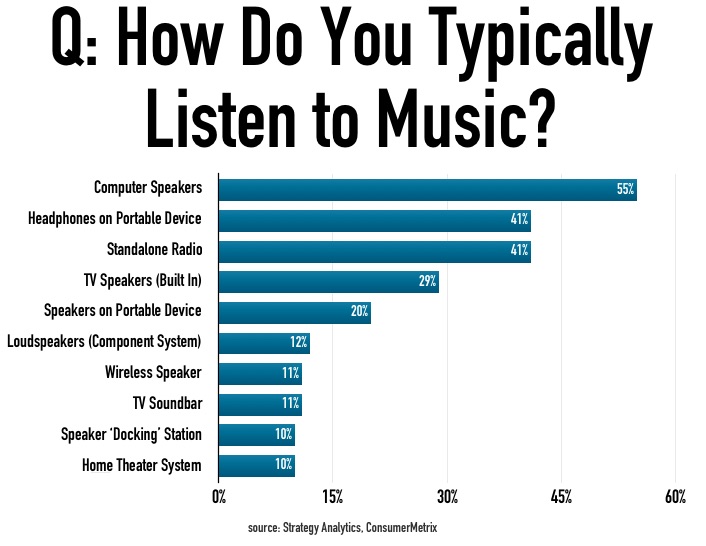 If you care about sound quality, the following will be a depressing read.

According to a survey conducted by Strategy Analytics, built-in computer speakers are now the most common way to listen to music, by a sizable margin.  In the study, laptop and desktop speakers overwhelmingly topped the list of frequently-used listening methods, with 55% picking the category.

Headphones connected to a portable device followed with 41% of respondents, alongside stand-alone radio, also with 41%.  Surprisingly, TV speakers were also highly-ranked, with 29% ticking that box.

“…most listening happens through systems that aren’t designed exclusively for music.”

Other, more audio-focused playback technologies, with loudspeakers and wireless speakers commanding 12% and 11%, respectively.  Indeed, audiophiles are buying higher-fidelity playback solutions, but that isn’t the mainstream.  In fact, most listening happens through systems that aren’t designed exclusively for music.  “Including radios, only four of the 10 most popular are dedicated music playback devices – connected loudspeakers (12%), wireless speakers (11%) and speaker docking stations (10%),” the Strategy Analytics report stated.

But this low-quality tale gets even more woeful.  According to the study, despite the relatively low quality devices selection, 43% of respondents reported being ‘very satisfied’ with the audio quality, with 26% ‘somewhat satisfied’.”

“…sounding the death knell for the likes of the hi-fi system.”

David Watkins, Strategy Analytics’ director of Connected Home Devices, blames a technological rush that has always prioritized convenience over quality.  “Music’s focus over the past decade has been about usability and convenience – being able to get it on as many devices as possible – whilst sound quality has been largely ignored or forgotten in this race to portability,” Watkins said.  “It’s bred a generation of listeners who’ve never really known what it’s like to listen to high quality sound and, consequently, is already sounding the death knell for the likes of the hi-fi system.”