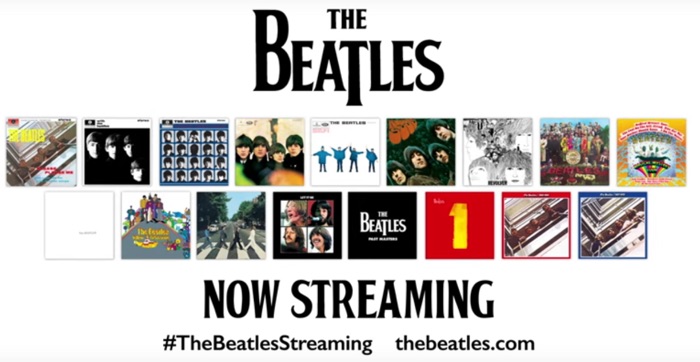 The Beatles may have been a pioneering rock group in the 1960s, but they’re technological laggards in the 2010s.   Accordingly, surviving members of the group have just announced that the Beatles catalog will be available across a long list of streaming platforms.

One thing this band hasn’t lost over the decades is timing.  In a perfectly-timed splash, the streaming Beatles catalog will go live across a number of services on Christmas Eve.  Here’s the list of participating streaming services:

Already, many of these services are blasting out the news, but without an exclusive, it’s tough to get an edge.  Overall, however, the catalog addition is likely to create a streaming surge for the holidays, with families gathering around to listen to a few Beatles classics.

Others could use the catalog to catch up on branding (or, lack thereof). Indeed, ‘Microsoft Groove’ means nothing to the music-listening population, and services like Slacker remain buried in the branding awareness pile.  Others, including Amazon Prime and Google Play, have always had the marketing capital, but never the capability to serious dent front-runners Spotify and Apple Music.

Then, there’s the matter of who’s missing.  Soundcloud is one standout, even though a considerable amount of Beatles catalog is available on the service (illegally, of course).  YouTube is another glaringly-absent name, especially given its recently-launched, YouTube Red premium service.  But again, giant chunks of the Beatles catalog can be found on YouTube, a serious problem for those on the list above.

From a strictly business standpoint, perhaps this timing makes perfect sense.  2015 was the year that streaming overtook downloads, with the latter format continuing its decline.  In turn, that decline could turn towards a nosedive, thanks to a massive push by Apple away from iTunes a-la-carte downloading.  That might be disastrous for a number of labels and artists, particularly those whose revenue is heavily reliant on recordings.