71% of All Music Listening Is Now Free, Study Estimates

Question: Approximately what percentage of your music listening is from each of the following sources? 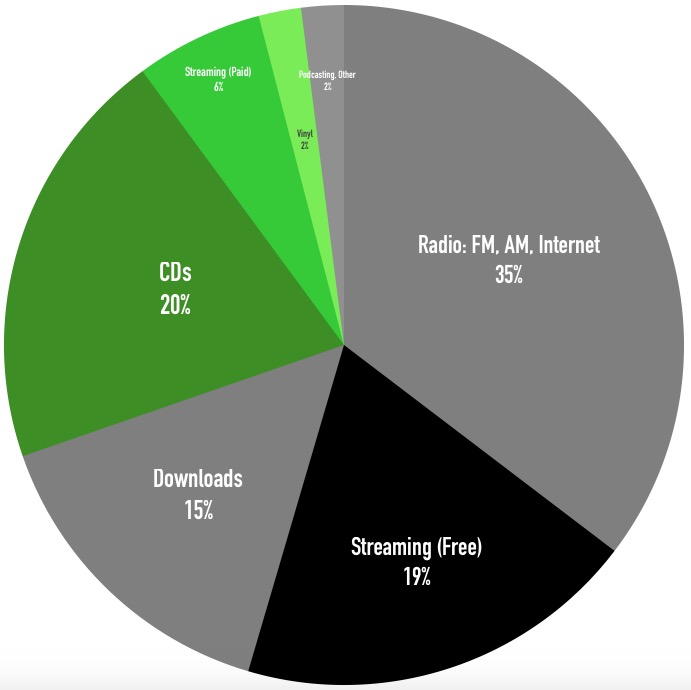 In case you were wondering why artists are constantly touring these days, there’s this.  According to a survey recently conducted by the British Phonographic Industry (BPI) and Entertainment Retail Association (ERA) in the UK, roughly 71 percent of all music listening is unpaid.

Even formats commonly regarded as paid are predominantly free. In the case of downloads, the BPI earlier estimated that 95% of all song downloads are unpaid and illegally acquired, an estimate that doesn’t even consider songs ripped from CDs.

Radio, across all broadcast and online formats, is nearly 100% free, with extremely small subscription percentages from online players like Pandora.  ‘Other’ formats like podcasting also unpaid.

That leaves CDs, vinyl, and subscription streaming as the remaining paid formats, which account for less than 28 percent of the total.  The remaining 1 percent comes from paid downloads, leaving a paid tally of roughly 29%. 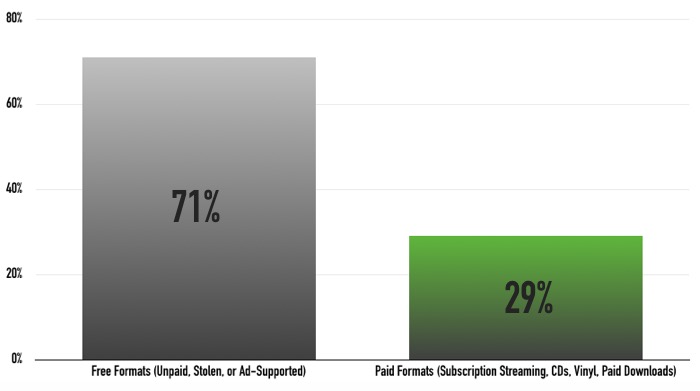 The finding comes alongside continued soul-searching within the music industry, particularly on the recorded music side.  In another recent study, Nielsen found that roughly 52% of all music spending is now going to live concerts, with free streaming on platforms like YouTube often a teaser to purchase concert tickets.  That is crowning huge winners like Live Nation and AEG Live, while forcing continued problems for major labels over-invested in pre-recorded music.

It’s also creating massive pressure for overwhelmingly free platforms like SoundCloud and Spotify.  Just recently, SoundCloud announced that a paid, subscription-based service would be arriving within a year, a timetable that coincided with a massive licensing deal with Universal Music Group.  Separately, Spotify is also reportedly under pressure to increase its paid subscriber totals, with ‘gated’ or subscription-only content for superstar artists like Taylor Swift and Adele under discussion.

Applying extra pressure is Apple Music, whose paid-only platform now boasts more than 10 million paid subscribers.  According to industry insiders, royalty checks from Apple Music are far loftier than those coming from Spotify, a development that is raising awareness on just how costly free has become.