A couple weeks ago I was forwarded an email from my friend Arwen who just started a lounge act, The Mega Reset, out of Denver. They put 3 songs on BandCamp, but hadn’t released anything anywhere else yet. She was hit up via the BandCamp contact form from a woman named “Charlene” with an AOL email address.

Is her last name Artfield or is that her company? 818 is the area code of the Valley of Los Angeles – where most scams in the entertainment industry live. But you wouldn’t know that unless you lived in LA.


My friend responded to this email requesting more info. “Charlene” obliged with: 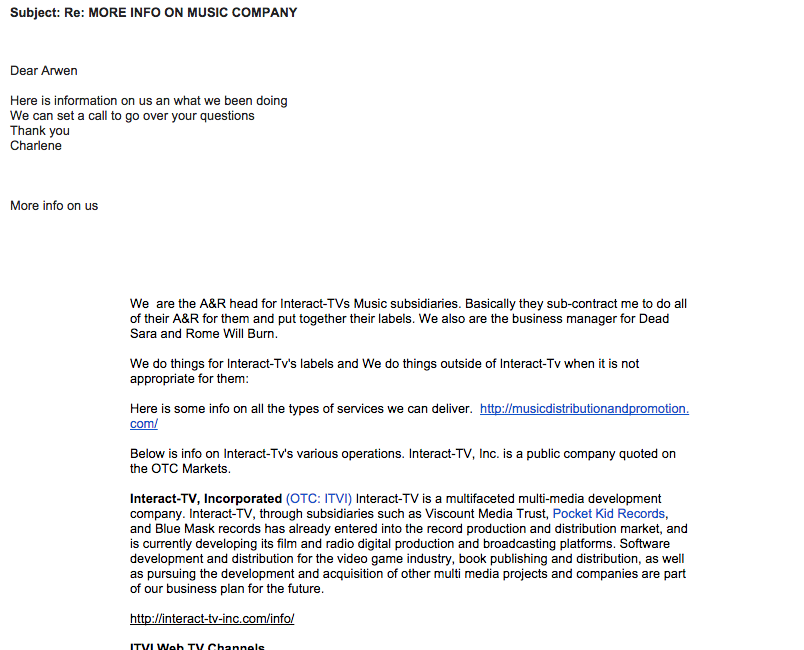 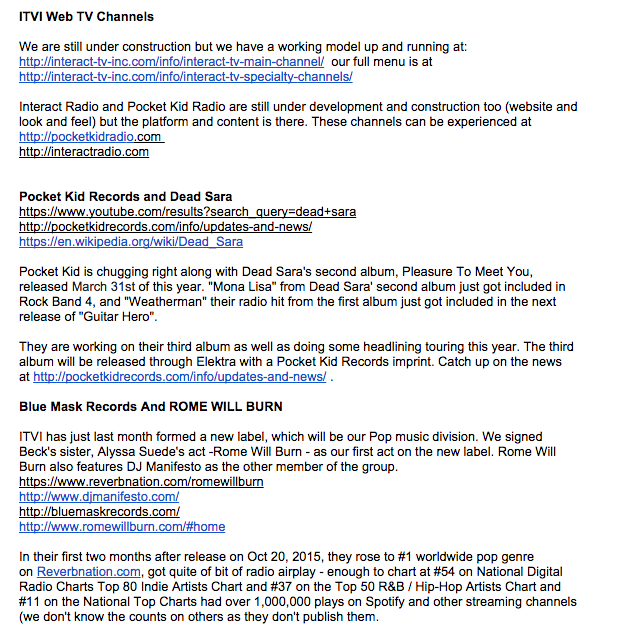 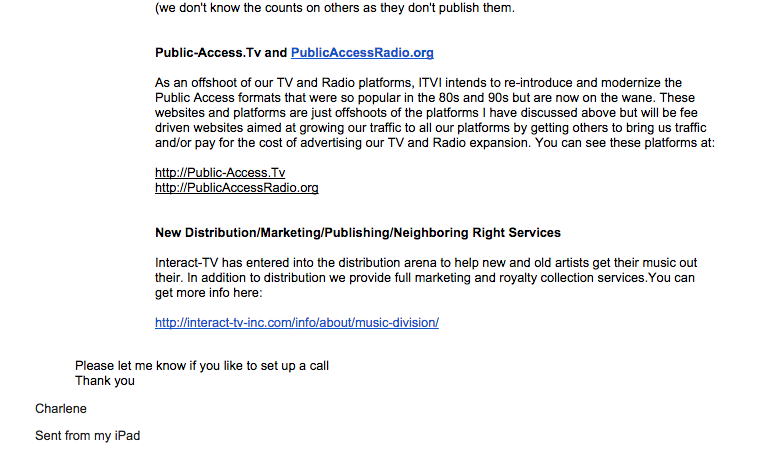 More info on us

****
This was how the email read verbatim. Red flag number one. This feels like a Nigerian Prince wanting to deposit money in my bank account.

But what was below the “More info on us” was interesting:

We  are the A&R head for Interact-TVs Music subsidiaries. Basically they sub-contract me to do all of their A&R for them and put together their labels. We also are the business manager for Dead Sara and Rome Will Burn.

Here is some info on all the types of services we can deliver.

****
Yes she had 2 spaces after We and before are. What Interact-TV is, nobody knows. Clicking through from the link brings up a site with an auto-video player, playing classic movies and TV shows. Not exactly sure what she’s trying to show with this.

They are working on their third album as well as doing some headlining touring this year. The third album will be released through Elektra with a Pocket Kid Records imprint. Catch up on the news at http://pocketkidrecords.com/info/updates-and-news/ .

ITVI has just last month formed a new label, which will be our Pop music division. We signed Beck’s sister, Alyssa Suede’s act -Rome Will Burn – as our first act on the new label. Rome Will Burn also features DJ Manifesto as the other member of the group.

In their first two months after release on Oct 20, 2015, they rose to #1 worldwide pop genre on Reverbnation.com, got quite of bit of radio airplay – enough to chart at #54 on National Digital Radio Charts Top 80 Indie Artists Chart and #37 on the Top 50 R&B / Hip-Hop Artists Chart and #11 on the National Top Charts had over 1,000,000 plays on Spotify and other streaming channels (we don’t know the counts on others as they don’t publish them.

Setting aside the fact that PocketKidRecords.com looks like a Geocities site from 1999 with a logo designed by a 1st year graphic design student, their artist Dead Sara is legit. They have a great record. They get blog recognition and tour. I’d discuss their numbers, but those can’t be taken at face value (especially from this label). Their Spotify profile is a bit alarming though, more on this in a bit. But Dead Sara, if you’re reading this, I highly recommend you audit Pocket Kid. Something tells me, you’ll find some interesting results. 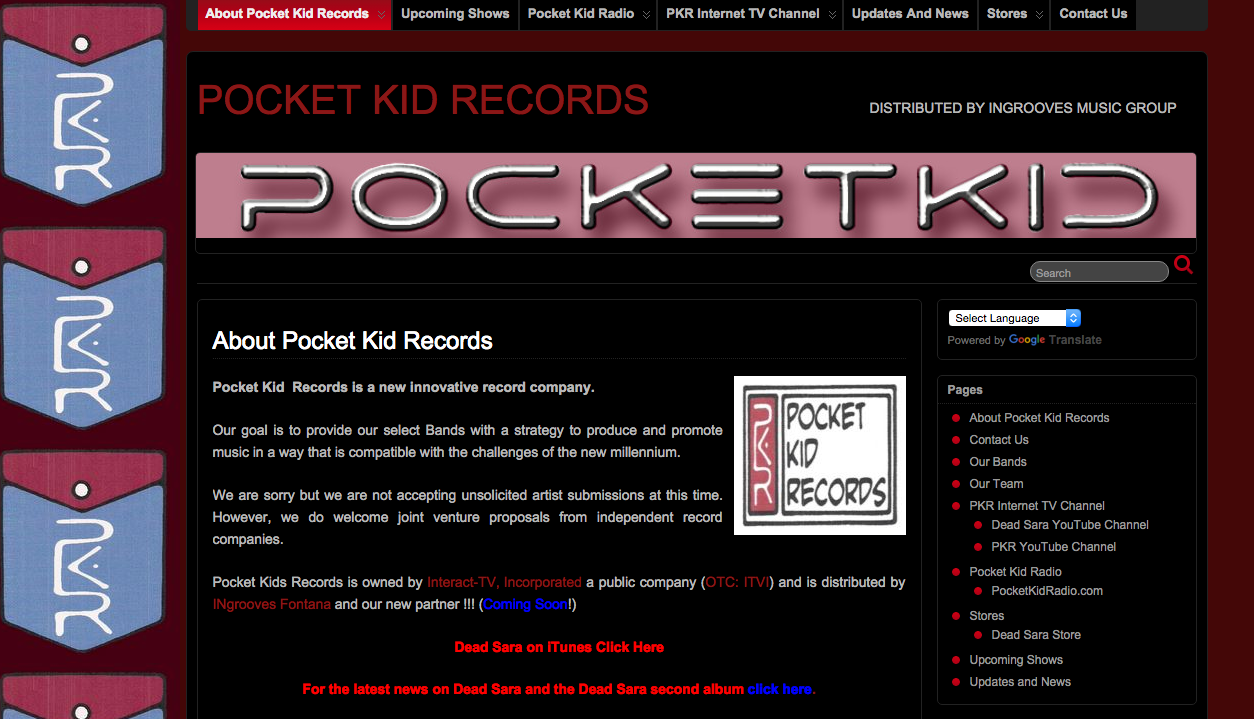 So, what about the other act they just signed, “Beck‘s sister, Alyssa Suede’s act Rome Will Burn?” Seems they’re doing well with all of their chart placements and Reverberation recognition right? Not so fast. Note, she didn’t say Billboard charts. What charts are these? We’ll get to this.

If you thought Pocket Kid Records’ website with atrocious, you’ll need to lower the bar for Blue Mask Records.

They claim Rome Will Burn got over 1,000,000 plays on Spotify. Well, that sure is interesting. So I checked it out. Sure enough, their top 10 songs equaled to be around 1M plays. So on face value, this seems legit, but clicking over to the About page is where the red flags started waving ferociously. Their #1 listener city is Ashburn with 10,355 Listeners and their #2 city is Boardman with 8,738 Listeners. 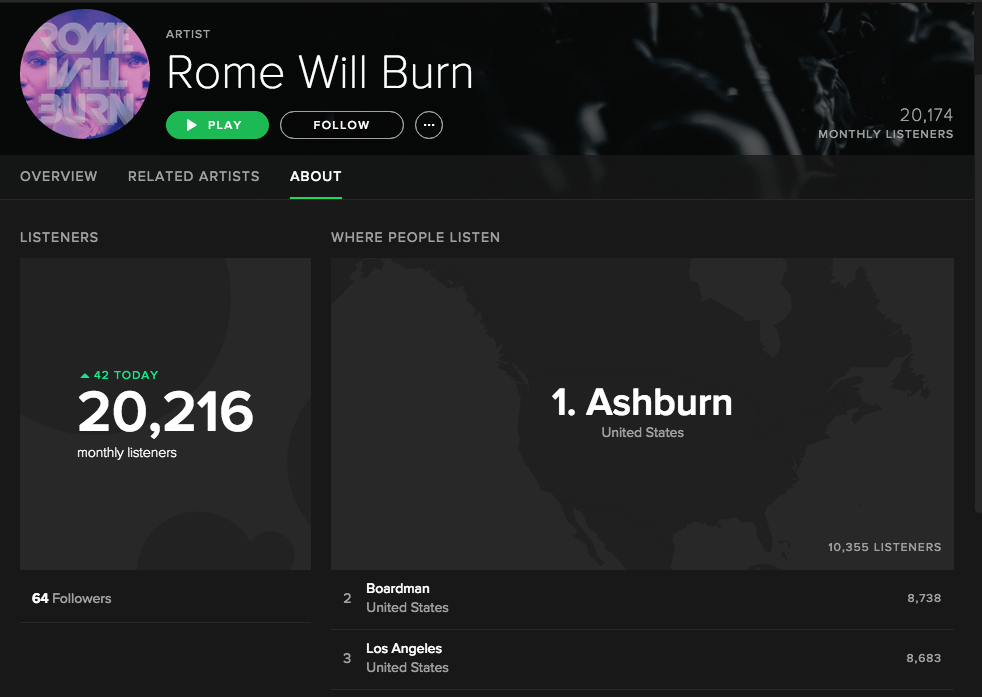 What Rome Will Burn’s Spotify profile indicates is that not only is 25% of the entire population of these cities Spotify users, but they all listen to Rome Will Burn. Let’s just say this is highly unlikely. Oh, and they only have 64 followers. Meaning, of their million+ plays, only 64 people liked them enough to click Follow. Hmm.

I contacted Spotify just to see if maybe Rome Will Burn was the Beatles of these sleepy towns. What happened the next day was most telling. Rome Will Burn’s entire Spotify presence was deleted off of the platform.

So, I guess Rome Will Burn aren’t superstars of Ashburn after all.

Arwen and “Charlene” went back and forth a few times over email, but Charlene pushed for a phone call. I decided to take the call as their manager.

I was on the phone for about an hour with Charlene and her “business associate” Stan Medley who is a consultant to Pocket Kid Records. Turns out Charlene Kay is part of Artfield Investments and Stan Medley is an investment banker. Neither seem to be actually working in the music industry – other than this Shady McShaderson endeavor.

Stan was quite the talker. Initially he sounded annoyed and tired. He begrudgingly pitched me on their services and began to explain to me how streaming, radio and charting worked. I played dumb. He clearly has learned what gets (naive) musicians exited. He kept hitting “we get artists charting on 10,000+ radio stations.” I asked him what charts. Billboard? “Uh no, Digital Radio Charts.” Whatever that means. He said for $3,000 a month he could get us charting on CMJ though. Mind you, these promises came without knowing my artist’s sound (he said as much in our conversation).

He also explained that he had a bunch more services they offered and depending on our budget, he could put together a solid release plan for us. I wanted to see how far he would go. I told him we got an investment of $75,000 and were looking for the best way to go about the release.

He went from his low-tone, unenthused, slightly annoyed persona to an ecstatic kid on a candy high. He didn’t stop talking for the next 30 minutes. I tried to interrupt him multiple times. But he didn’t hear me. He Energizer Bunny-ed through. At one point Charlene (who was still on the call), and I were both just saying “Stan, Hey Stan, Stan, he has a question. Stan! Stan! Stan!” It was pretty hilarious.

I see these kinds of scams all the time. They are nothing new. I used to get hit up on Myspace all the time back in the day. Then it was ReverbNation. And now I guess these scammers are using Bandcamp.

This kind of scam isn’t as bad as the Nigerian Princes’ draining your bank account, though it is in the same category as pay-to-play promoters. These washed up has-beens or never-weres attempt to convince young, naive musicians to pay them lots of money for services they have no right charging for. But unfortunately, these kinds of promoters know the key words that get musicians to drool: radio spins, charting, 1M plays, Sunset Strip, record labels, A&R, and so on.

Good rule of thumb for all you musicians out there: if someone hits you up and asks you for money, you probably shouldn’t give it to them— no matter what they promise you or how many fancy titles they claim to have. And always do your research.