YouTube music video plays have been getting gamed for years, with major labels one of the biggest buyers.  Facebook and Twitter followers have been notoriously for sale for even longer.

But when it comes to inflated play counts in music, almost everything is now in play, including Spotify.  In fact, Spotify seems to be an increasingly important menu item alongside the usual social media culprits. 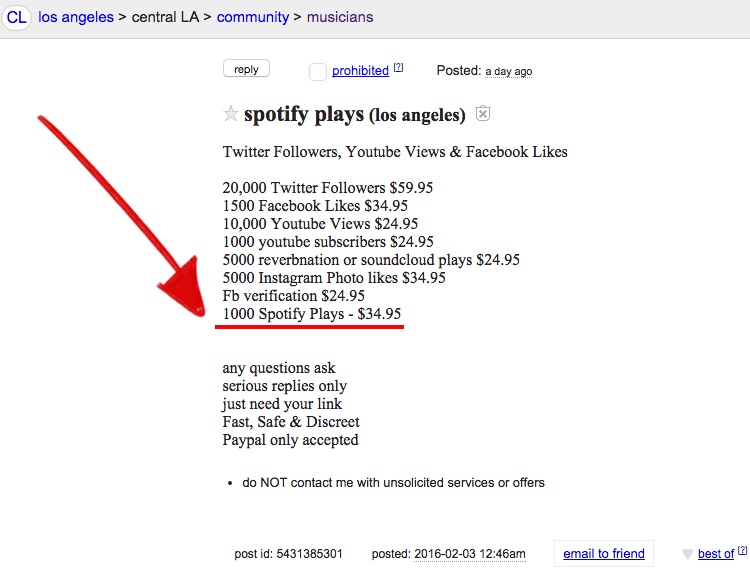 This appeared on Craigslist this week in Los Angeles (and probably other cities as well).  But $34.95?  That is downright exorbitant compared to some alternatives, including Streamify, which offers artists 1,000 plays over a three-day span for just $5.

Streamify says this is legit, with unspecific deejays and tastemakers spinning the track.  “They are 100% natural plays, performed by real accounts and of course are eligible for full royalties,” the company describes on its site, streamify.me.  “Totally unique users will plays your tracks.  All plays are absolutely real and eligible for royalties.”

DMN asked Streamify to elaborate on the sources of these plays, but soon found ourselves getting obfuscated.  “I regret that I cannot disclose the exact method of how we are introducing the songs to the people,” Streamify’s James Scott replied.  “We are using a plethora of ways to do that, as there is no single method that works for all.”

According to Streamify’s site, this is what a simple, $175 package can give an obscure artist over a 23 day period.  In this schedule, the first 1,000 plays cost $5, but Streamify is willing to offer those as part of a free trial.

That starts to look pretty good, especially given the millions of songs receiving zero plays on Spotify.

Streamify says 1,000 is what it takes to start getting noticed (and paid).  Indeed, pumped-up plays — across Spotify and other streaming platforms — can serve a number of ends, including more receptivity from labels, festivals, playlist tastemakers, and fans.  But it also bumps royalties, which are astoundingly low on a single song but can start to accumulate with tonnage.

It’s simple math.  And here’s a pro-tip: once a track has been listened to for 30 seconds or more, a royalty payment is triggered.  That calculation sparked an outrageously sneaky ploy by Vulfpeck, whose ‘Sleepify’ white noise album generated more then $20,000.  Fans, in on the game, placed the album on non-stop repeat until Spotify shut down the party.

It was all beautiful tomfoolery, though Spotify has been on the defensive lately against numerous allegations of inflated plays and paid-for playlist inclusions.  The platform has reportedly been stepping up monitoring of play counts to manage fake plays, especially by artists pumping up streams to generate higher royalties.  That includes the upload of songs bearing similar titles and sounds to top-ranked tracks, as well as repeated robo-playing of ‘white noise’ tracks.

Welcome to the wonderful world of digital music, where (almost) everything is now for sale.  These days, labels, venue owners, festival planners, and advertisers look at social media numbers with a grain of salt, though YouTube, Spotify, and SoundCloud are all subject to fudging in 2016.

All of which means — once again — that if a band looks huge online, it could be paid for.