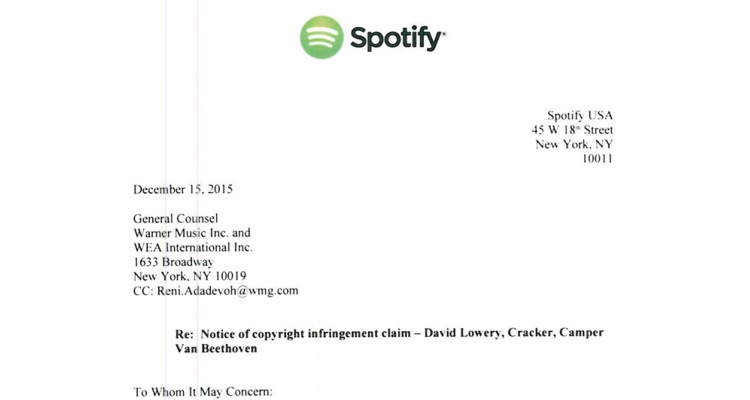 Earlier this week, Spotify’s high-priced lawyers pointed their guns at David Lowery, the artist activist who started a class action now valued north of $200 million.  The legal attack attempted to nullify Lowery’s aggressive class action entirely, based on technical issues that had nothing to do with the core claim.

But what is that core claim?  Lowery’s lawsuit was predicated around Spotify’s failure to pay specific mechanical licenses, an issue that specifically relates to the licensing of publishing assets (ie, the underlying composition instead of the recording itself).  But according to correspondence leaked to Digital Music News late Thursday evening, Spotify’s lawyers reached out to Warner Music Group’s attorneys in December claiming that Lowery had raised broader issues that included the recording side.

Those broad claims triggered a clause in Spotify’s contract with Warner Music, including the right to remove the content as needed.  “We are writing to inform you that we received a demand letter from David Lowery and Camper van Beethoven (collectively, the “Artist“),” the letter states.  “Among other things, the Artist asserts that his exclusive rights to copyrights in musical works and/or sound recordings have been infringed by Spotify’s exploitation of the applicable musical work and/or copyright.”

A footnote in the letter then suggests that Lowery may have issued a broad-reaching demand, without specifying the licenses infringed.  “The artist did not identify whether he is seeking a publishing or sound recording claim for each work, so we have listed all of the affected Warner tracks.”

Alternatively, the letter could be deliberately misrepresenting the claims made by Lowery to Warner Music, a move that would could constitute tortious business interference (among other issues).  Indeed, the listed tracks have indeed been removed from Spotify, at least in the US, based on a check late Thursday evening.

Both Lowery and Spotify have been contacted for comment on the correspondence.  The full letter follows.