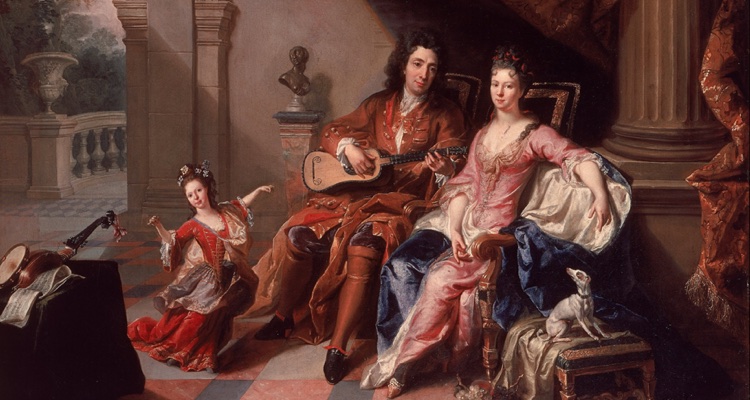 The dating world for musicians is often a complex one. And if you think dating a musician is complicated, trying being the musician in the relationship.

I’ll be writing this article based on my personal experience as a single male musician.  I’m also based in New York City, which makes dating even harder.  But whether you’re a male or female in the music industry, there are various complexities that can make romance and dating as a musician extremely challenging.

Before I even get into it, let me properly preface this with some important context.  Pay attention to the next line.

As a musician, dating is not as glorious as the stereotype makes it seem.

To every non-musician reading this, you’re just an outsider looking in. Your entire life, you’ve been fed lies. Here are some of the most common false truths about musicians when it comes to dating, especially for up-and-coming musicians:

Now I’ll be honest, I have my fair share of female supporters, but nothing comes close to an official ‘groupie’.  And to every dude dreaming of becoming a rock star just for the chicks, I may have just shattered your hopes and dreams.  Sorry (but not sorry), the truth is you’ll never make it on that motivation alone. 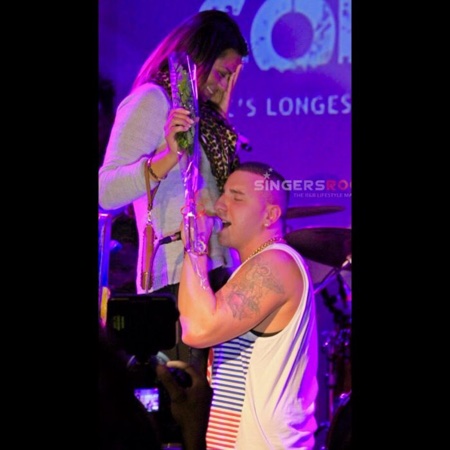 This was fun, but really just part of the show!

To every person that thought you actually get panties thrown at you while you’re on stage, that doesn’t happen unless you’re R. Kelly.

The reality is this: groupies don’t care about you when you’re on the come up, because you’re likely broke and struggling.  Sadly, the groupies are trying to weasel their way into the VIP at Gansevoort to get a glimpse at Trey Songz, not come to your show at some hole-in-the-wall joint.

But enough of all this groupie talk.  Let me further explain why actual dating as a musician is so hard.

My opinion is that most men are doing it totally wrong.  Almost daily, I see some loser guy acting like a savage in order to get a woman’s attention.  As a result, women in New York (and most other places these days) have their guard up, and for good reason – there are tons of creeps out there ruining it for the rest of us.

However, good guys still exist.  I’d like to think I’m one of them.  But the reality though is that when women meet me, they immediately start thinking I’m a player once they find out I’m an r&b singer.  I had one girl ask me recently,

In plain English, she wanted to know how many girls I’ve been with. Unfortunately, that information is classified. A gentleman doesn’t kiss and tell…

I’m a digital marketing analyst, a singer, songwriter, producer and as of last year, I’ve been documenting all of my music experiences via my blog and as a contributing writer to Digital Music News.  As you can imagine, my life is really busy.  I’m working hard to invest in my future. Therefore, the one thing that I’m always lacking is time.

Aside from that – I have very ambitious long term career goals, and I’m pretty busy trying to achieve them.  I want to write a book, get my PhD., land a publishing deal (with either Warner/Chappell, Sony/ATV, or Universal), win a Grammy, open a music studio in NYC, become a world class marketing consultant, and more.

Randi Zuckerberg (sister of Facebook’s CEO, Mark Zuckerberg) says busy people, particularly entrepreneurs, can only have 3 out of these 5 work-life balance items.

That’s a bold statement, but I’d have to agree it’s kind of true.  For me personally, I’ve dedicated most of my time towards work, sleep, and friends.  Now this flat out sucks when it comes to fulfilling a woman’s every lingering desire, because time is the one thing that she will likely want the most.   But it’s the element that there is the least amount of.

That’s why it is absolutely critical to have a woman who understands the musician grind, otherwise it just won’t work.

No matter how you look at it, jealousy can make any relationship extremely toxic.  With that, I have nothing but the utmost respect for any woman brave enough to date a musician.   If it’s going to work though, there has to be lots of trust.

It’s certainly understandable for a woman to think that groupies are readily accessible at any given moment, but that’s just simply not the case (see above).  In my past experiences, re-assuring my girlfriend that not every female artist I work with is trying to sleep with me has only been half the battle won.  The other half is doing things like inviting her to studio sessions and shows, so she can see that life as an indie musician is not a Gucci Mane music video. 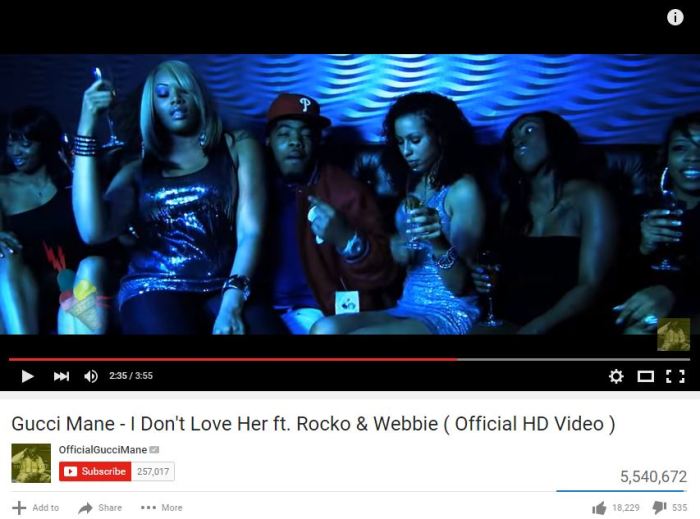 This doesn’t happen in real life!

This all goes back to trust and honesty – but women must know that late nights in the studio are NOT equivalent to cheating.  Not saying that’s never happened, but it’s up to the musician to remain faithful, and up to the woman to be understanding and supportive.  Also vice versa if it’s the other way around!

Some artist/musician friends of mine are sacrificing it all for the chance to live their dreams.  Working two jobs, and living with their parents so that they don’t have to spend money on expensive New York rent.  They understand that in order to be successful you absolutely have to invest in yourself, there’s just no way around it.

I have many artist friends that are investing quite a bit of coin into their personal careers.  While it may seem unreasonable to drop over $1,000 on a music video to the average person, this is very necessary for advancing the career of an upcoming artist.

Thankfully, I have lots of skills I’ve been able to lean on to generate cash flow.  I’ve done everything from marketing consultations to offering my musicianship for hire.  I’ve also produced records, played sets at bars, and taught guitar lessons. 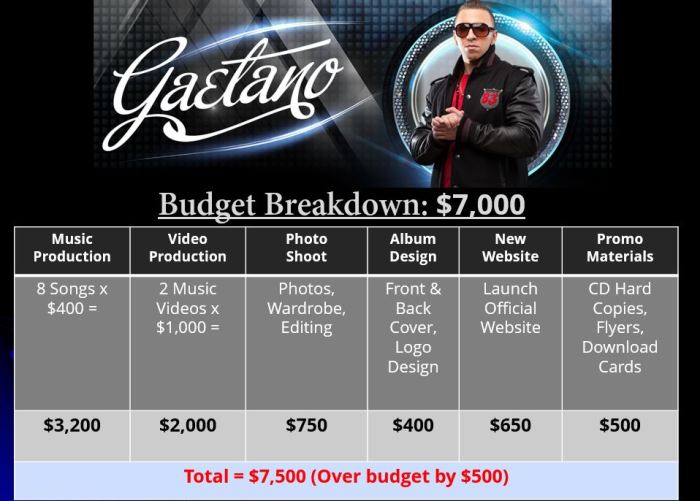 Here’s a slide that came straight out of a presentation I gave to Mike King, founder of iPullRank.  I was interviewing for a role at his company and ended up getting hired as an SEO Analyst.  From an indie perspective, this is what it takes to put out a quality project (at bare minimum).  The result was my debut EP, “Fade Away”. 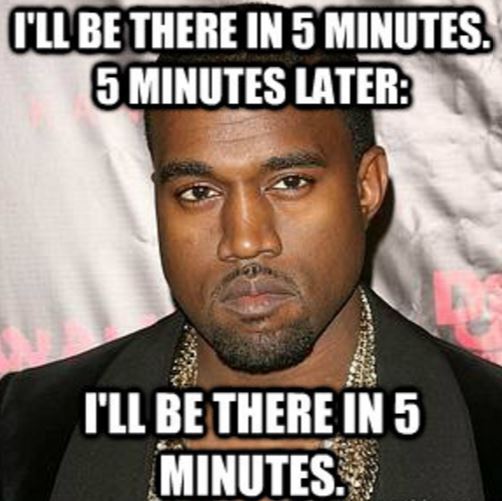 5. Musicians Are Notoriously Late for Everything.

Official musician time is the “add 1 hour” rule.  And if there’s one thing I know a woman doesn’t like, it’s being kept waiting.  I gotta do better.  I’m not the best with punctuality, but I try to be.  I will say this though – train delays have screwed me over in most cases where I was actually on time, but ended up being late!

I’m not woman bashing here, but lets be real.  Some (not all) women will try to evaluate what you’ve done, who you’ve worked with, and ultimately – what they can gain from your situation.  I can’t tell you how many women have been overtly flirtatious with me and even pretended to be interested, just to try and get something for free.

It’s not all women by any means, but there are certainly quite a few opportunists out there.  In fact, I spoke with a very talented artist friend of mine,  J’Maine Jones on this very subject.  Shockingly, here’s what he had to say:

“A girl once snatched my bank receipt out my hand just so she could see how much money I had in my account. Then after invading my privacy she had the nerve to say, ‘Oh that’s it? Sh*t, I thought you made more money than that’.”

That said, I think opportunism is a music industry problem in general.  I recently had a conversation with my friend Shay Leonia, a talented artist who was asking me how to break into the songwriter ‘placement scene.’  While I think this scene as a whole can become a soul sucking rat race full of rejection and frustration, I told her that my recommendation is to approach producers with “What services can I offer? How can I help you with projects that you’re working on?”

This selfless mindset is rarely adopted by artists, but it often leads to more reward in the long-run because it allows you to nurture and build relationships in a genuine and organic fashion.

7. Dating Other Musicians Can Be Complex.

At this point, you’d think it just makes sense to date within the music scene.  Look at all the commonalities.  You’ll share the same goals and struggles.  You can be there for each other when things go wrong.  You’ll be able to help each other in studio sessions, and even make beautiful duets.  So it should be a no-brainer, right?

There was once a time when I really wanted to find a girl that was pursuing music just like me.  I would always think how wonderful it would be to share that same passion of music with someone who is just as passionate about it as I am.  Turns out, in my 8+ years of being in the industry, it has never happened.  Why is that?  Well, based on my experience, here’s why:

• Some women I’ve encountered in music were already dating (or f*cking) a producer to get free records.
• Some female artists I’ve met are simply just too stand-offish.
• Some women have already found their musical hubby.
• Other women just don’t have the time or interest in dating period.

To the point I made about some females already finding their musical hubby – these are rare but beautiful circumstances.  In fact, my close friend DeVo D has been in a relationship with another female artist who is a dear friend of mine, Brittany Foushee. I truly love seeing that, and I do get very happy for musical couples that are able to combine forces and achieve great things. Lydia Caesar is another amazingly talented artist friend of mine who proudly boasts her hubby, and even wrote a song about him called “St. Louis.” 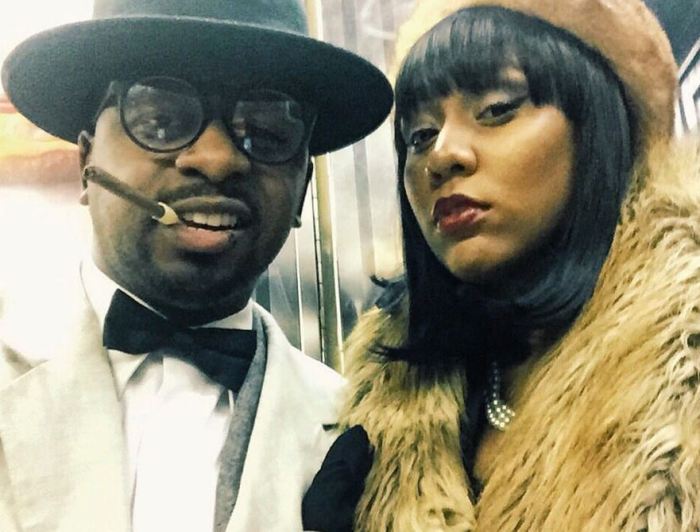 In all of this, I hope I’ve emphasized the point that being a musician doesn’t make it any easier to attract women.  Some might even argue that it makes things more difficult.  I still don’t know if I’d prefer to date within the music industry or outside of it.  All I know is that I definitely need someone who is compromising and understanding to the grind, whether they’re a part of it or not.

Gaetano is a NYC based Singer, Songwriter, Producer, Guitarist that has worked with some of the biggest names in music. After releasing 2 EP’s andproducing records for major artists, Gaetano has been documenting his music industry experiences via his blog.