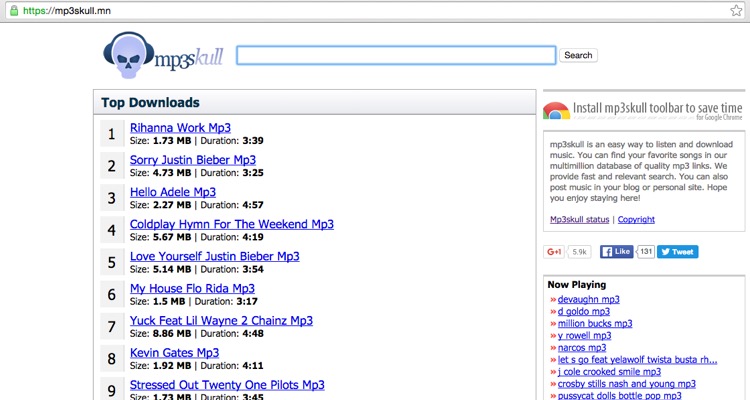 More than 10 days after a federal court judge orders MP3 Skull to immediately shut down, surrender its urls, and pay $22 million in damages, the site remains totally live and untouched.

On February 24th, the Recording Industry Association of America (RIAA) won a permanent injunction against Mp3 Skull.  Alongside that ruling, they also won a $22 million damages award.

The purpose of that order was to force the immediate shutdown of the site, and to curb further piracy damages.

So far, not one person representing the pirate site has even responded to the massive lawsuit.

‘Take down, stay down’

In a stern decision issued last month by the US District Court for the Southern District of Florida, the illegal mp3 download hub was not only ordered to cease operations immediately, but also cease control of a variety of mp3skull domains.  That hopscotch of shifting domain names includes mp3skull.to, mp3skull.cr, mp3skull.is, and mp3skull.yoga, among others.

Currently, the mainstay .com destination remains completely functional, though it is shifting traffic to .mn as of February 26th.  That redirected site is identical to the stripped down directory offered on the .com extension.  That site offers downloads from Rihanna, Justin Bieber, Adele, Coldplay, Lil Wayne, Twenty One Pilots, and Fetty Wap readily available.

Surprisingly, Google has now stripped the domain from its search results, a removal that appears to coincide with the injunction.  Earlier, the site — and it’s ever-shifting list of domains — were easily found through a simple Google search, though this appears to be a rare case of ‘take down, stay down’ response the industry is desperately lobbying Congress to enact.

That said, Google results are opening the lane for a myriad of copycats.  And that’s a common occurrence following the shutdown of a major piracy brand name.  That has certainly been the situation surrounding Grooveshark, a site that is still spawning innumerable clones based on its considerable brand recognition and lingering Google search traffic.

Grooveshark was officially shuttered in April of 2015.

According to the RIAA, Mp3skull has received more than 3 million DMCA takedown demands since 2011.  “Since 2011, various copyright owners have sent piracy notices on more than 3 million illegal files available through the site,” the RIAA updated last October.

“This is a site that has routinely been among the top recipients of such notices over the past four years.”