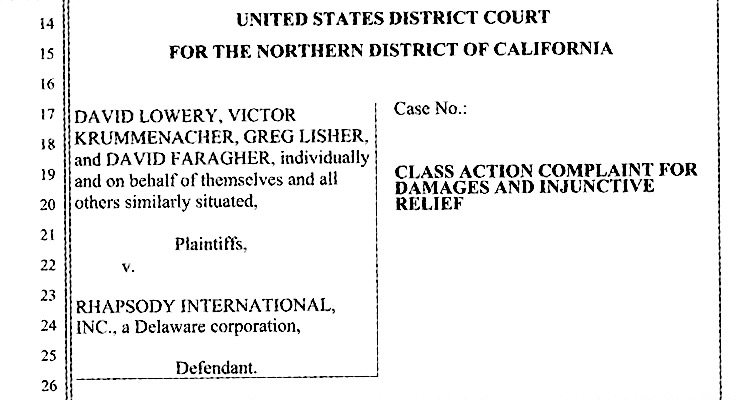 Yesterday, sources pointed Digital Music News to a string of upcoming class action lawsuits involving Spotify competitors.  Now, the first of those lawsuits is being served against Rhapsody.

The massive class action lawsuit against Rhapsody is being filed by Michelman & Robinson, LLP, the same law firm that filed against Spotify in December.  The initial, 17-page complaint, exclusively obtained by Digital Music News on Monday evening, will likely be entered into the docket of the US District Court for the Northern District of California by Thursday of this week.  That represents a critical first step, with hearing dates and response briefs from Rhapsody soon following.

Just like the Spotify filing, the plaintiffs against Rhapsody include David Lowery, along with a number of fellow members from Lowery’s bands, Camper van Beethoven and Cracker.  Perhaps most importantly, the class action carries a similar damages estimate of $200 million, based on the approximate number of unlicensed works in Rhapsody’s catalog.

Spotify’s lawyers have already attacked their case and attempted to nullify it completely, though Rhapsody may have fewer resources to fight this battle.  The streaming service currently carries more than three million paying subscribers, though many are ‘low-rent’ users from bundled mobile packages.  Just last week, leaked financial documents showed losses at Rhapsody topping $35.5 million, with serious questions of long-term survival surfacing.

Just like Spotify, Rhapsody is being accused of non-payment on mechanical royalties, a specific type of publishing license often administered through Harry Fox Agency, or HFA.  The license typically requires the mailing of NOIs, or Notices of Intent, though HFA (on behalf of Rhapsody) started sending backdated NOIs this year following the Spotify case.

And that may have been a critical error: the retroactive NOIs dial back t0 2005, according to paperwork shared with Digital Music News, a strange procedural decision that could be used as evidence of admitted infringement in upcoming proceedings.

Outside of that smoking gun, Rhapsody’s longevity as a streaming music provider makes its lack of payment all the more egregious.  This is a service that dates back to 2001, and that agedness was clearly mentioned in the complaint.

“Touted as one of the earliest U.S.-based subscription streaming services, Rhapsody has a significant and impactful presence in the music industry, and the available resources to properly obtain all requisite licenses. Rhapsody’s current illegal practices and procedures in connection with its unlicensed reproduction and/or distribution of the copyrighted Works, combined with its failure to pay owed mechanical royalties, evidences its practice of unfairly profiting off the backs of composers.”

The filing comes on the heels of urgent settlement discussions involving Spotify and a group of other streaming providers that may include Rhapsody.  The talks, coordinated through the National Music Publishers’ Association (NMPA), were leaked to Digital Music News on Monday, and could substantially reduce the number of class action participants.  According to top-level details shared by sources, the settlement includes a one-time, $5 million Spotify penalty, plus the creation of an interface to properly match recording and publishing copyright data.

The following is now being filed in the US District Court for the Northern District of California.