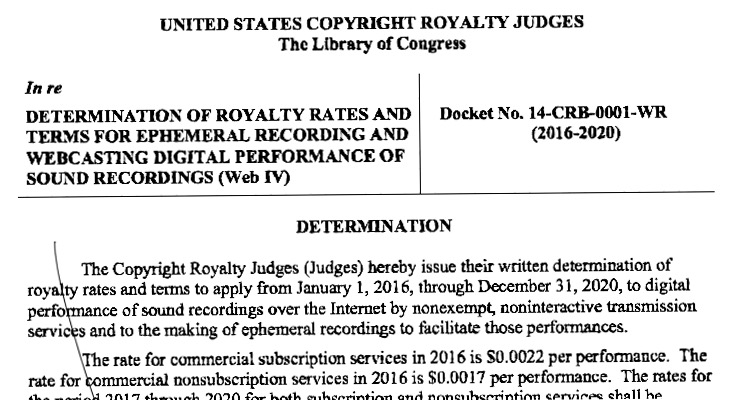 Live365 is already dead, thanks to the elimination of special rates for small webcasters.  Now, a surviving group of struggling internet radio stations will likely follow suit within 60 days.

On December 16th, 2015, a panel of Copyright Royalty judges issued a written determination of royalty rates and terms to apply to internet radio broadcasters, specifically from January 1st, 2016, through December 31st, 2020.  An amendment was made to the determination on December 24th, 2015, followed by a final determination on March 4th, 2016.

Now, that final determination has been issued and forwarded to the U.S. Copyright Office Register for legal review.  If the determination is granted, it will become a U.S. Federal Regulation, with the official ‘rate for commercial subscription services’ moving to $0.0022 per performance (effective 2016), and ‘commercial non-subscription services’ hitting $0.0017 per performance.

That officially nixes a desperate plea by smaller webcasters, who petitioned the US Government in late January to no avail (view the full petition here.)

Marching forward, the ruling will be reviewed within 60 days, and if the ruling is approved companies will have a maximum of 30 days to appeal.

Larger internet radio outlets like Pandora and iHeartRadio are in favor of the new rates, though the changes create an extremely tough environment for smaller webcasters.  Live365, for example, has already been pronounced dead.  Prior to going black, the smaller station hub desperately offered data to support a lowered rate, and continuation of the Small Webcaster Settlement Act:

”Live365  attempted to reach a per-performance rate by way of a revenue analysis, factoring in the webcasting services’ costs and a presumed 20% profit, and applying the remainder of revenue to royalties.”

However, judges in a ‘Web III’ proceeding quickly rejected those attempts, and Live365 subsequently endured a major financial crisis as investors quickly pulled support from the company.   The Webcaster Settlement Act of 2009, which presented below-market royalty rates, was a critical oxygen source for the company.

Update: Digital Music News has now obtained a copy of the full submission, embedded below: