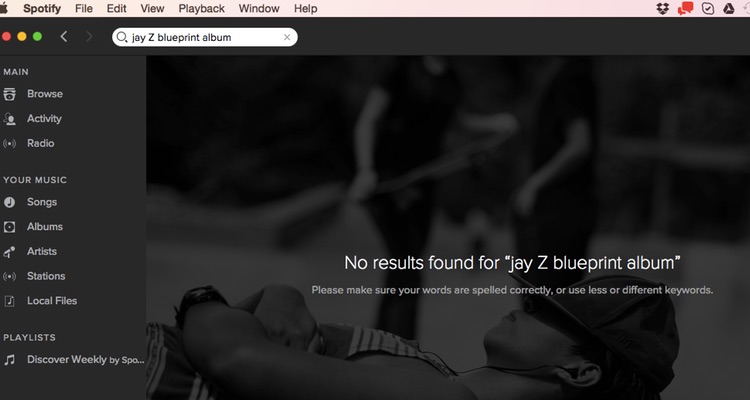 In a bid to boost subscriber numbers at Tidal, Jay Z has quietly swiped his Blueprint albums from competing music streaming sites.  These coveted releases are now Tidal exclusives.  Anyone surprised?

As first unearthed by Pitchfork, the legendary albums have now disappeared from Apple Music, iTunes, Spotify, Deezer, Rhapsody, and Amazon’s digital music store.  It soon became apparent that the albums had been quietly pulled months ago.  “Jay Z’s Blueprint albums have not been available on any streaming service except Tidal for a few months now,” a Spotify spokesperson told Pitchfork.  “We hope he brings them back soon so that his millions of fans on Spotify can enjoy them again.”

It’s common for artists to pull their music from a music service, typically over royalty rates.  Taylor Swift infamously removed her content from Spotify and subsequently explained that she doesn’t “…agree with perpetuating the perception that music has no value and should be free.”

She’s not alone, though Jay Z’s decision was more tactical.  Sensible or not, this is an obvious ploy to get users to sign up for Tidal.

This all started back in April, when Jay Z decided to remove his first album, Reasonable Doubt, from Spotify.  Since then, other Tidal supporters, like Rihanna, Beyonce, and Kanye West have all released exclusive content to Tidal.  On his latest album, ‘The Life of Pablo,’ Kanye West even went as far as tweeting,

This didn’t quite work out for Kanye though, as his album didn’t even reach the charts (though that’s another complicated story).

There’s a slight problem here though.  While trying to increase the number of subscribers and popularity of Tidal by making music exclusive to the service, restrictions also have the effect of limiting revenue overall.  Case in point: Kanye’s exclusive album release single-handedly doubled Tidal’s subscribers, while harming the overall impact of the release.

Against that ‘learning,’ it will be interesting to see what effect, if any, Jay Z’s music exclusivity has on Tidal subscriber numbers. Despite Jay Z’s claims that his streaming service pays more per stream, what’s the use, if there are fewer people streaming their content?