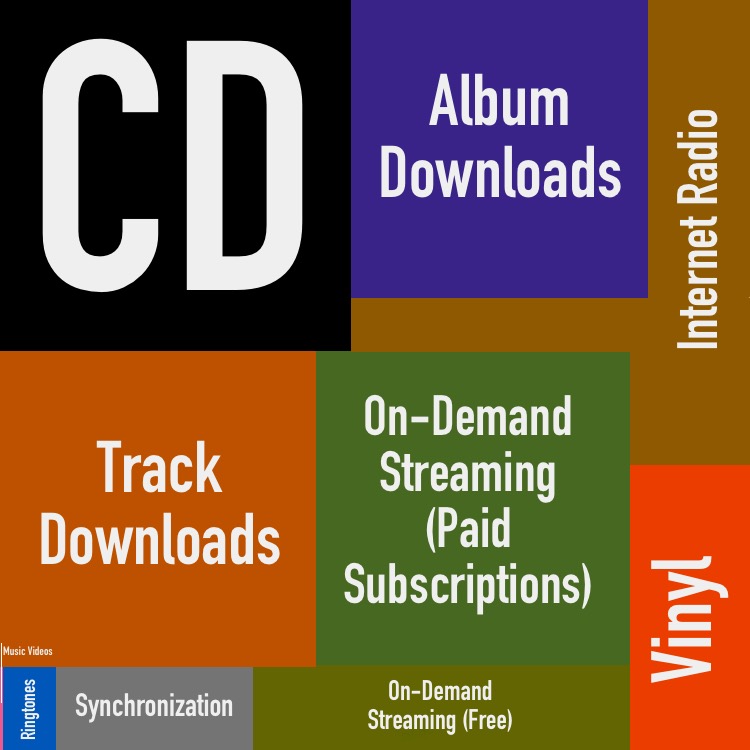 CDs maintained a sizable chunk of recorded music sales in 2015, part of a sales map that now features a large number of competing formats.  According to US-based, 2015 stats from the RIAA, CDs, subscription (paid) on-demand streaming, internet radio, and downloads all grabbed substantial portions of a recorded music industry that totaled $7.09 billion in annual revenue.

In terms of the format breakdowns, the old strongholds are shrinking, including:

And, here’s where al the growth is coming from:

Then, there’s the issue of the broader industry total, and whether it’s likely to grow.  Despite immense growth around streaming music (particularly paid, on-demand platforms), the broader recorded music industry in the US gained a scant 0.9%.  That reflects a recovery and potential bottoming, though it’s unlikely the music industry can recover a decades-plus plunge of more than 65%.

Meanwhile, the traditional breadwinners are continuing to tank.  That includes the CD and paid downloads, both of which are experiencing double-digit year-over-year declines, and could be essentially become negligible within five years.

All of that is putting greater emphasis on a totally different mix of revenue-generators, particularly live shows, branding relationships, and emerging publishing channels.  Additionally, a number of artists (from Kygo to Wale) are moving beyond the album format, and successfully satisfying a totally different consumer preference.