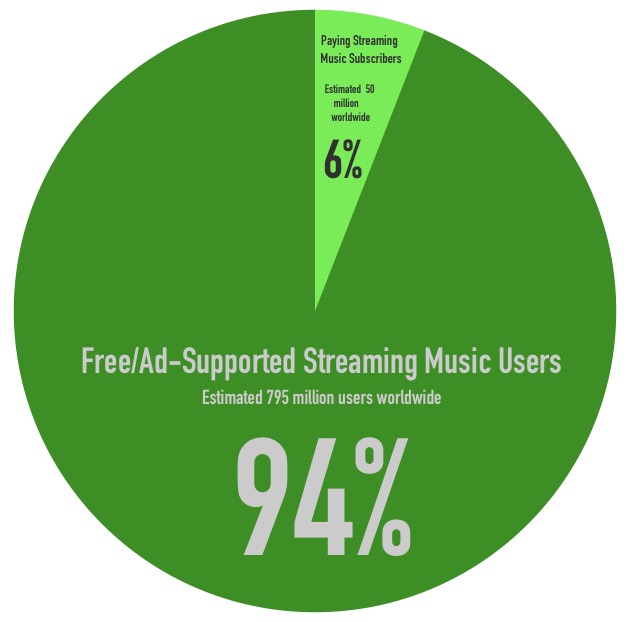 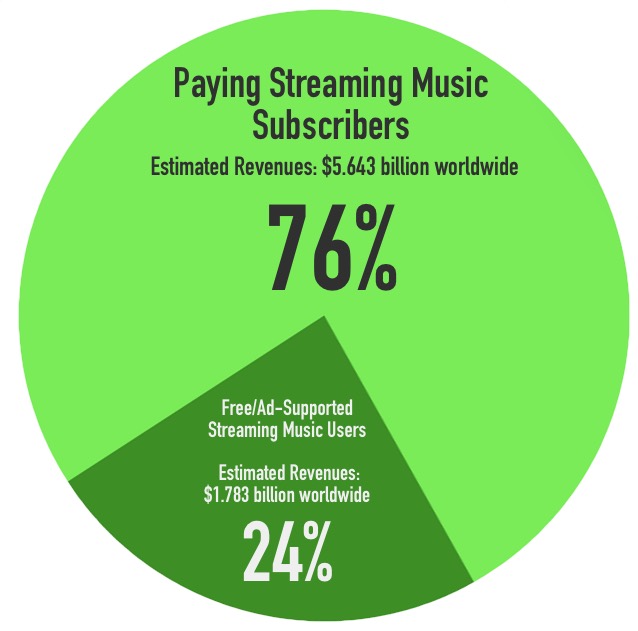 Last week, the Recording Industry Association of America (RIAA) reaffirmed that vinyl records are generating more revenue than free, ad-supported streaming users.  But that is less of a reflection on how much money vinyl is making, a more a reflection of just how little money ad-supported music streaming actually generates.

These are just estimates, though despite a free, ad-supported streaming music crowd that accounts for approximately 94% of all music streaming users worldwide, the revenues generated by that mass is just 24% of the on-demand streaming music pie (internet radio isn’t included in this analysis).


Based on a running estimate of approximately 50 million, full-paying streaming music subscribers worldwide (with Spotify now contributing 30 million of those), total revenues land at roughly $5.643 billion.

Here’s the breakdown on how we built these estimates:

In 2014, the International Federation of Phonographic Industries (IFPI) estimated a total of 41 million paying, on-demand streaming subscribers.  That likely includes a number of bundled or lower-paying subscribers, though 50 million is now a ‘working average’ based on the following reports from major services:

Those numbers, coupled with a few others, brings the working total of paying subscribers to roughly 50 million.

In its 2015 report this month, the Recording Industry Association of America (RIAA) estimated revenues of approximately $1.219 billion based on an average paid subscriber base of 10.8 million (averaged over the year).  Extrapolate that to 50 million, and the revenue figure moves to $5.643 billion.

This is a bit tricky, and relies on some liberal assumptions, but:

The revenues from free streaming users are based on RIAA figures of $385.1 million for 2015, using the same worldwide extrapolation for worldwide premium revenues.