Goldman Sachs Making Up to $19.3 Million on Spotify’s Latest Debt Round… 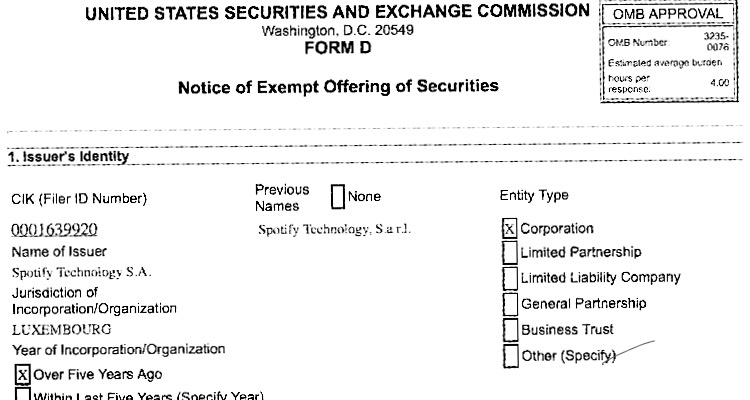 Now, a formal Securities & Exchange Commission (SEC) Form D filing confirms the earlier report.  The filing highlights further information beyond those previously outlined, and allows us to take a greater look at the conditions of the deal.

It shows TPG, Dragoneer, and other issuers of the $1 billion tranche are part of a round that will be finalized withing one year (though will likely close much sooner).  It also highlights the fact that Spotify has to pay a massive fee of $19,256,500 in sales commissions to Goldman Sachs and Nordea Bank.

Goldman is an equity stakeholder in Spotify, and stands to make a giant windfall from the company’s upcoming IPO.  Now, Goldman is smartly double-dipping by also capturing fees surrounding the additional cash raise.  Some of that will be captured by Nordea, in amounts undisclosed (or unknown).

But why does Spotify need so much cash, all at the same time?

The large injection of cash could afford a massively-accelerated rate of growth, with the capability to better compete with Apple Music, SoundCloud, and other aggressive platforms.  The debt financing would also allow Spotify to preserve existing equity stakes, not to mention investor input, all of which comes with more proper equity rounds.

That said, $1 billion is a huge amount of money, with large monthly repayments and covenants that could seriously cramp the company in the future.  And that doesn’t include the near-$20 million in financing Spotify is paying for Goldman’s high-end servicing.

Meanwhile, the mega-round is raising rumors of a possibly gigantic acquisition ahead, on the ‘Pandora level’ according to one DMN source.  That could fatten the platform ahead of a juicy IPO kill, which is now expected to happen within the next year.

The complete filing is below.