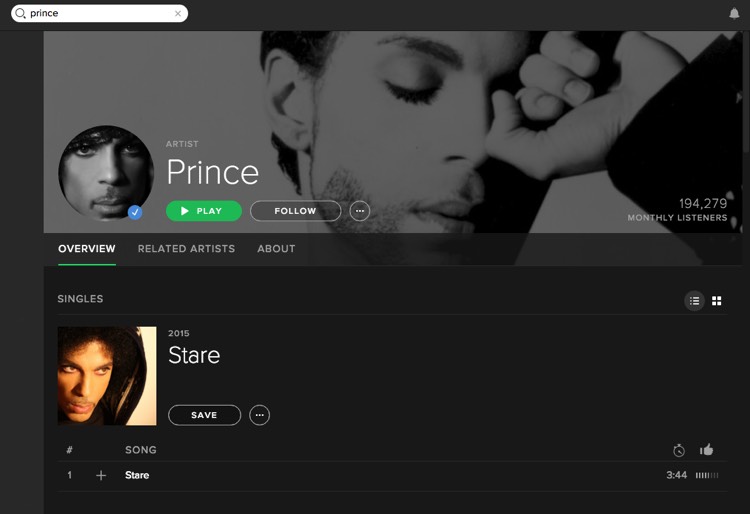 Prince: Not Available On Spotify

As fans flock to buy, download, and stream Prince’s music, there’s one platform that will be relatively quiet: Spotify.  Step on the biggest streaming music platform in the world, and you’ll find just one Prince track: ‘Stare’.  Nearly one year ago, the pop superstar refused to license his music to Spotify, largely because of its insistence on free access streaming.

But Spotify is hardly alone.  Prince’s ban also included Apple Music, SoundCloud, YouTube, Deezer, and even bankrupted platforms like Rdio.  Some are easier to control than others, but even YouTube is heavily patrolled, with only a smattering of illegal tracks available.

SoundCloud, another content free-for-all, only features tracks from one of Prince’s latest releases, Hit n Run Phase One.

“Prince’s publisher has asked all streaming services to remove his catalog. We have cooperated with the request, and hope to bring his music back as soon as possible.”

The reasons for the boycotts aren’t mysterious.  For starters, Prince was never a fan of cherry-picking, even though consumers overwhelmingly prefer to select and reassemble singles as they please.  Fair enough, though this was one artist that refused to be forced into that consumption habit: “Like books and black lives, albums still matter,” Prince declared during his presentation for Best Album at the Grammy Awards last year.

But the bigger problem is this one: streaming, like many facets of digital and internet music distribution, is failing to pay artists substantially.  That is keeping many of the greats at bay, including living stars like Taylor Swift and Adele.

But the resistance runs even deeper for Prince.  Back in 2010, Prince famously declared that the internet was ‘completely over,’ but a few years later, reframed that comment in compensation terms.  “What I meant was that the Internet was over for anyone who wants to get paid, and I was right about that,” he clarified to the Guardian last year.

But Prince’s legacy is as much artistic as it is activist: wars against Warner Music Group and even his own fan clubs were part of a combative stance that soon spilled into the internet.  Unlike most artists, Prince had the guts to take on YouTube’s exploitative practices towards artists, and quickly became known as an ‘artist not to f–k with’ on the platform (as one top developer once shared with DMN).

“The problem is that one can reduce it to zero and then the next day there will be 100 or 500 or whatever. This carries on ad nauseam at my expense.” 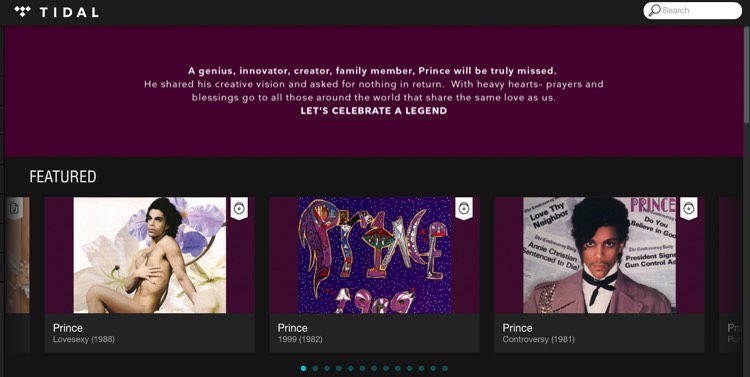 And so it is with ‘freemium,’ something Spotify refuses to eliminate at the expense of some serious catalog.  That raises the question of why Apple Music doesn’t have much Prince material, given its paid-only approach.  Perhaps Tidal, an artist favorite with reportedly superior royalty payouts, was the only viable choice.

Now, Tidal is enjoying the fruits of their artist-friendly approach with a massive Prince selection.  And as sad as Prince’s death is, it could hand Tidal it’s biggest subscriber surge since its ‘exclusive’ of Kanye’s The Life of Pablo.