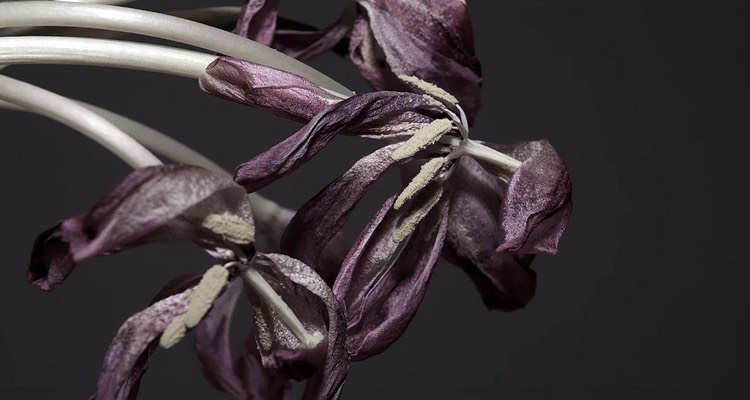 Prince was a tireless and tenacious crusader against exploitation by record labels, streaming services, ISPs, and Google.  But is Prince’s war now dead?

Just hours after Prince’s death, Google constructed a massive, search-driven homage to the pop superstar.  In the same way that Google celebrates creators like Tesla and crusaders like Harriet Tubman, the search giant neatly assembled everything Prince, including links to his music, information about the singer’s life, and images of the superstar, all with a perfectly-purple backdrop.

It was an ironic monument, reminiscent of a band of pioneers naming their town after the Indian chief they just scalped.  Google, after all, was the focus of a massive legal war by Prince, based on their refusal to systematically remove his content.  Even now, top searches on Google lead of all manner of illegal Prince content, including unauthorized Russian mp3 sites, links to entire torrent discographies, and endless images with suspect rights.

If Prince was still alive, Google’s victory lap would have been viewed as a vulgar, low gesture.  In fact, it’s likely that the artist would have spoken out against it.  The reason is that Prince felt that Google was massively exploitative towards artists and their music, and worse, used that exploitation to drive up billions in value at the expense of creators.  Back in 2007, the pop icon announced legal action against YouTube, based on their systematic abuse of the safe harbor provisions of the Digital Millennium Act, or DMCA, which makes it nearly impossible to remove free, illegal pirated content.

Google (and YouTube) have always fired back that it’s impossible to police copyrights on their massive sites.  But that sounds like malarky to content owners and activist artists like Prince, especially since YouTube does a perfect job of removing things they don’t like, including pornography.  And, really, really bad stuff like child pornography, which never requires a complicated DMCA takedown process to remove.

“Prince strongly believes artists as the creators and owners of their music need to reclaim their art.”

YouTube offered a typically condescending response, one that has somehow mollified artists, labels, and publishers for more than a decade.  “Most content owners understand that we respect copyrights, we work every day to help them manage their content, and we are developing state-of-the-art tools to let them do that even better,” YouTube chief counsel Zahavah Levine snapped back.

But is YouTube demonstrating respect, or horrible exploitation?  The pop legend quickly fired back, asking how all these ‘state-of-the-art’ tools over at YouTube and Google couldn’t figure out how to simply block clearly-infringing uploaders and links to obviously-pirating sites.  “The problem is that one can reduce it to zero and then the next day there will be 100 or 500 or whatever,” Prince offered, referring to a statute of the DMCA only requires Google to tear down infringing content, not patrol its re-upload.

Regardless, Prince waged war on YouTube to scrub the network of his content, which is one of the reasons why Prince’s material is very difficult to find on the platform today.  Unsurprisingly, one of the biggest legal fights on YouTube involved a Prince song, ‘Let’s Go Crazy,’ which was playing in a background of a dancing baby video.  The mother of that baby, Stephanie Lenz, fought back on grounds of fair use after the video was ripped down, with Google-powered legal army Electronic Frontier Foundation (EFF) litigating to keep the video alive.  In the end, the ‘Lenz Case’ served as a precedent in content fair use, with Prince and Universal Music Group declared the loser. 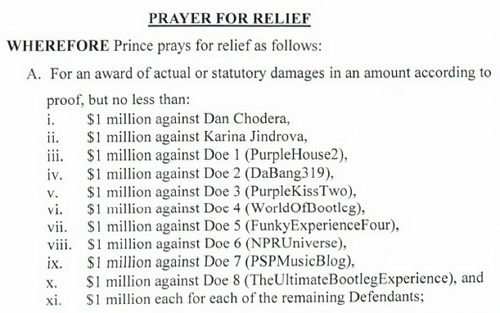 “Prince has suffered and is continuing to suffer damages…”

But Prince’s war to protect his music went far beyond Google’s borders.  In early 2014, Prince sued 22 Facebook users (many die-hard fans) for uploading live clips of his concerts, with penalties soaring past the $22 million mark.  “Prince has suffered and is continuing to suffer damages in an amount according to proof, but no less than $1 million per Defendant,” the lawsuit read.

Prince also attempted to target the source: pirate sites themselves, most of whom are profiting handsomely off of advertising.  In 2007, Prince filed against the Pirate Bay, the slippery torrent site that still stands despite dozens of legal attacks and raids.

The war against theft also spread beyond music, and into areas like photography, merchandise, and memorabilia.  In 2007, Prince’s team managed to remove more than 300 eBay auctions involving Prince-inspired mugs, keychains, socks, and other mementos that were created without Prince’s permission.  Even Twitter got caught in the crossfire for allowing Prince-inspired Vines, part of a multi-theater battle that kept a lot of lawyers busy (and removed a lot of content).

The question is whether any of this moved the needle.  Streaming services and online content creators tread carefully around Prince’s content, and other superstars have followed suit, in varying degrees.  Taylor Swift sued Etsy creators for misappropriating her image on homemade items, and Kanye West recently threatened a laughable lawsuit against the Pirate Bay.  Prince boycotted Spotify, and Swift, Adele, and even Kanye have imitated that approach.

But despite those stances, Prince seems to have lost his war against content devaluation and outright theft.  Even Google has tactfully battled back against accusations of theft and devaluation, by offering hard numbers and hoisting the rare YouTube superstars as examples of its contributions.  In fact, YouTube not only argues that the devaluation of music is theoretically impossible, but that YouTube is revaluing music if it is.

In that light, Google’s splashy, purple-themed memorial to Prince is more of a celebration of Google’s victory over a combative, difficult artist than a celebration of any legacy.  In fact, the Artist probably would have asked his lawyers to rip it down.