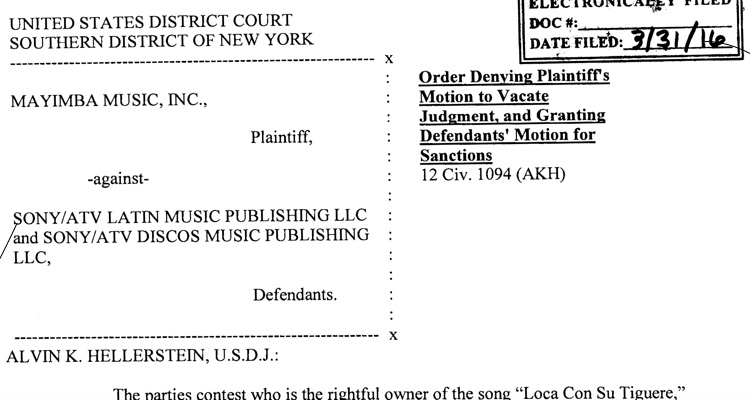 Sony asks for $750,000 after being taken to court with fake evidence…

The case started when New York-based Mayimba Music LLC filed a lawsuit against them regarding the ownership of Shakira’s 2010 hit song ‘Loca’. Mayimba Music alleged that this song was a complete rip-off of a recording by Ramon Arias Vasquez called ‘Loca Con Su Tiguere’ which was created in the late 1990’s.

In August 2014 after analysing a cassette recording which was said to be recorded in 1998, the U.S. District Judge Alvin Hellerstein found Sony guilty of distributing copyright infringing content. Hellerstein concluded that Shakira’s single was directly copied from a Dominican rapper named Eduard Edwin Bello Pou in 2007, which lifted music from Ramon Arias Vasquez.

In September 2014, loopholes were found in the case. New evidence was presented to the Judge which found that the cassette recording wasn’t actually made in 1998. In light of this new evidence, in December 2014, Sony filed a motion to vacate the court’s ruling. In August 2015 the judge found that the tape had been fabricated in 2010 or 2011, not 1998 which was claimed. The Judge concluded that Mayimba did not have a valid copyright, as the deposit copy was not a bona fide copy.

After, the judge made the ruling, both parties made subsequent motions. Mayimba’s motion asked for a new trial based on Sony’s alleged presentation of fraudulent evidence in the evidentiary hearing, but Mayimba’s motion was denied. Sony filed a motion for sanctions and sought attorney’s fees and costs against Mayimba. Their motion to include attorney’s fees and costs was granted and now Sony seeks $750,000 from Marimba Music LLC.

The motion is below.