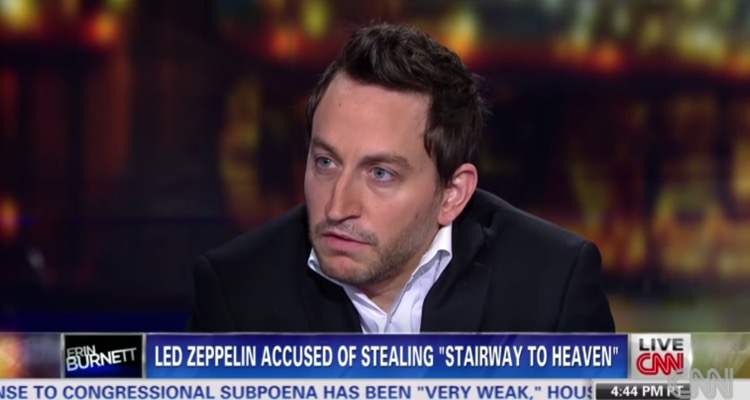 Is all this copyright infringement litigation going too far?  The case against Led Zeppelin is now becoming tragically comic.

Earlier this week, a massive judgement against Shakira was reversed based on the discovery of completely fabricated evidence.  Yeah, they made up the recordings and copyrights to score on the boom in infringement lawsuits (Sony is seeking $750,000 in damages; more on that situation later).  Now, the case against another juicy target — Led Zeppelin — also seems to be heading towards the crazy place.

Last month, attorneys representing the estate of Spirit filed an aggressive lawsuit against Led Zeppelin, alleging that ‘Stairway to Heaven’ was actually a rip-off of ‘Taurus’ by the band Spirit.  Immediately after that suit was filed, DMN readers recognized the signature chord progression in at least two earlier pieces, and ultimately, a baroque composition dating back to 1630.  All of which means that Jimmy Page’s indelible guitar lick was nearly 400 years old and in the public domain.

Open and shut case, right?  Wrong: Francis Malofiy, attorney for the estate of Spirit frontman Randy California, subsequently offered a ‘$1 settlement’ to Zeppelin’s attorneys for a substantial writing credit (and ownership share worth more than $40 million).  That is probably going to be rejected, given that early next month, a jury is set to listen to a version of ‘Stairway to Heaven’ that existed in 17th century Italy.

Now, more information is surfacing on Malofiy himself, particularly during his work chasing a copyright infringement lawsuit against Usher in 2014.  That case went down in flames, but not before Molify was sharply censured for ‘outrageous’ and ‘unprofessional’ behavior.  “Throughout this copyright litigation, Plaintiff’s Counsel, Francis Malofiy, has behaved in a flagrantly unprofessional and offensive manner,” presiding Pennsylvania federal judge Paul Diamond wrote.  “Seventeen of the twenty Defendants in this action have moved for the imposition of sanctions against Mr. Malofiy.”

The censure was splayed over dozens of pages, with endless examples cited by Diamond.

“More disturbing are Malofiy’s sexist, abusive remarks.  For instance, during one deposition, Malofiy stated the following to Defense Counsel:

DEFENSE COUNSEL: Mr. Malofiy, I would appreciate you not referring me to as a girl,which you have done repeatedly off the record and on the record.

All of which led to the possibility of Malofiy being disbarred, something that never happened.  “Whether Malofiy should be removed from practice is a question properly answered in another forum,” Diamond concluded.