Seriously? After receiving a check for just $5.05 from the HFA, Lowery is intensifying his war against Spotify, HFA, and the NMPA.

”You’re kidding me right?  What is this for? No accounting? No cover letter.  Is this some sort of ‘bait’ check? ‘

Lowery suspiciously dubs the check a ‘sleazy legal trick’ to obtain a ‘implicit license,’ and questions if other independent artists received the same.  Lowery — an outspoken artist advocated — wants transparency, specifically in-depth details which include: tracks being streamed, number of spins, accounting time period, and how the HFA arrived at this amount.  A mere $5.05 check doesn’t cut it, and doesn’t include any of that.

Lowery says the choice is clear and simple for songwriters and publishers.

Do you want ”a backroom deal between related parties OR a transparent court supervised process?”  If you opt for the former, you’re more than likely going to end up with something like this… 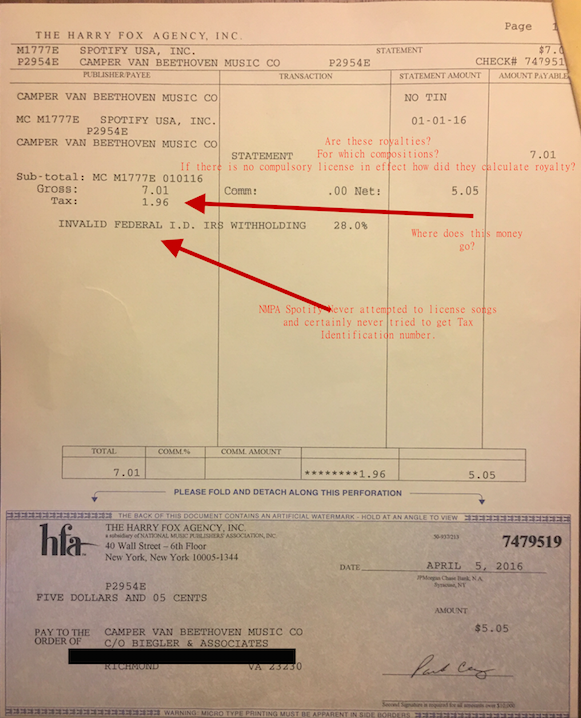 The check comes during a lengthy and expensive legal battle between Lowery and Spotify over unpaid royalties, a battle royale which also involves the National Music Publishers Association (NMPA) and Harry Fox Agency (HFA) a group specialized in mechanical royalties that has been deluged with accusations of incompetence.

Spotify has been under fire over unpaid royalties for some time.  As a result they hired HFA (a former subsidiary of NMPA) to obtain mechanical licenses of songwriters and publishers that opted into their service, as well as sending ‘Notices of Intent’ on Spotify’s behalf for those songwriters and publishers who haven’t yet opted into their service.

But is this a giant conflict of interest?  Lowery certainly thinks so.  Despite having a considerable catalog, no license was obtained for any of Lowery’s works by the HFA, no ‘notice of intent’ has been sent, and no royalties paid (outside of the above).  This prompted Lowery to file a massive $150 million class action lawsuit against Spotify, which has been ongoing since December 28th, 2015.   The lawsuit alleges that Spotify is distributing copyrighted content while skipping key royalties, a federal copyright breach.

Shortly after the lawsuit was filed, Spotify announced an out-of-court agreement with the NMPA, and this is when things got a little interesting.  The agreement aimed to create a better way of finding publishers who are rightfully owed streaming royalties, as well as dealing with the mass of money apparently being held by Spotify for unmatched royalties.  Sounds like a workable solution, but Lowery claims that it was a direct attempt by Spotify to deflate the class action and says that the streaming platform is ”using misleading information to push putative class members into a lowball royalty settlement with the National Music Publishers Association.”

Lowery then requested access to review all communications Spotify USA issues to putative class members related to its settlement with the NMPA, but Spotify fought back saying that Lowery is making baseless claims and continuously changing the goal posts.

But if Lowery is receiving checks like this, there’s little wonder on why he’s complaining.  And if there isn’t even a revenue breakdown for the artist, how can anyone know if the payment is correct?

It definitely seems as though there’s a serious lack of transparency here.