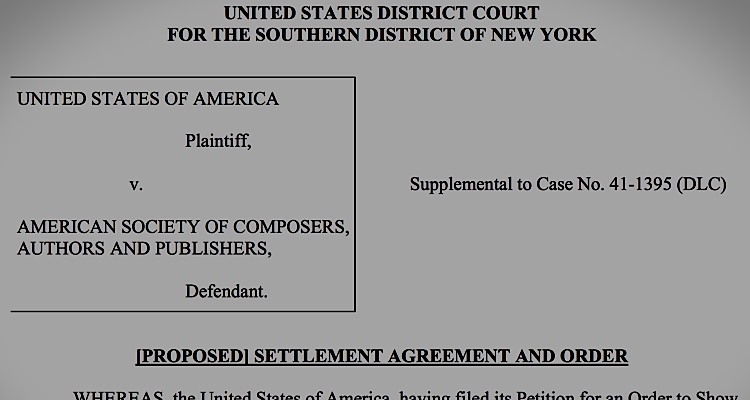 The American Society of Composers, Authors and Publishers, or ASCAP, announced today (May 12th) that they have agreed to pay $1.75 million and change its licensing practices to settle federal antitrust contempt charges.

The US Department of Justice had been investigating claims that the performance rights organization violated an earlier antitrust settlement, a situation that now pegs ASCAP with multiple federal violations.

ASCAP says that the settlement agreement addresses concerns expressed by the DOJ over exclusivity provisions included in certain agreements.  Indeed, the group was found to have executed roughly 150 agreements with songwriters and publishers that made ASCAP their exclusive licensor.  Those are blatantly illegal under DOJ-enacted regulations, with the performance rights society agreeing to strike the provisions from identified contracts.

The violation relates to DOJ- and court-structured consent decrees, which give songwriters and publishers the right to independently license their music to anyone.  That right, sometimes called a ‘carve out clause,’ enables independent dealmaking and represents a threat to PRO’s licensing model.

The monstrous fine for bad behavior could compromise ASCAP’s broader mission, especially when it comes to cracking down on smaller restaurants and venues.  The powerful PRO has been known to force payments from mom-and-pop establishments, sometimes running them out of business.  Those actions sometimes draw ire from community members and local journalists, who accuse the organization of unfair bullying by a well-financed gang.

ASCAP has always replied that they’re fighting for artists, indeed an honorable defense.  Now, that moral high ground may be less solid.

The Agreement maintains the group’s current Board of Directors structure of 12 songwriter and composer members, and 12 music publisher members elected by the broader membership.  That longtime structure will ensure that publisher board members do not participate in the approval of new licensing agreements.

“We took immediate steps to resolve this matter and have strong controls in place moving forward,” said Paul Williams, ASCAP President and Chairman.  “This settlement enables ASCAP to focus on our mission of protecting the rights of music creators, who depend on us for their livelihoods, and to maintain our unique status as the only member-owned and governed performing rights organization in the US.”

The Settlement Agreement was approved by the ASCAP Board of Directors and is now subject to the approval of a Federal Rate Court Judge.

Below is the proposed order.