Looks Like Spotify Settlement Checks Are Already Rolling In!

Yes, this is actually a check mailed by the Harry Fox Agency for mechanical publishing royalties.  No, it’s not on behalf of Spotify (yet…).

When will songwriters and publishers start to receive back-payments for unpaid mechanical publishing licenses on Spotify?  That’s now anyone’s guess, with the wheels just starting to turn on a structured settlement agreement involving that National Music Publishers Association (NMPA).

That agreement, exclusively published by Digital Music News in late April, includes a myriad of stipulations and structured payout schedules, including a $5 million lump-sum penalty from Spotify to be divided amongst participating NMPA members.  The contract itself may be subject to additional drafts and negotiation rounds, with final signatures perhaps months away.

Add multiple, ongoing, contentious class actions against Spotify, and you have the type of chaos that almost guarantees massive delays in first payments (if they’re received at all).

Then there’s the sticky problem of Harry Fox Agency itself, an organization roundly being blamed for the current royalty mess.  Indeed, HFA, tasked by Spotify to handle specific mechanical licensing, may have been permanently tarred as incompetent by the current imbroglio.  Those accusations have only been intensified by gaffes like $0.00 checks (see above), $0.01 checks (we’ve seen at least one), and accusations of shadiness on the part of the NMPA, whose recent sale of HFA to SESAC could be complicating by the recent issues.

Those strings may explain why HFA has been tapped by the NMPA to clean up the very mess it’s been accused of creating.  Though strangely, Spotify has been tasked with creating an online interface to properly match songs with their mechanical rights (a task that seems more appropriate for the company in charge of matching — and paying — songwriters on their mechanical rights).

Enter David Lowery, a relentless fighter for artist rights that was recently insulted with a $5.05 check from Harry Fox (‘seriously? are you f–king kidding me? Lowery gasped after receiving the mysterious ‘payment’).  That payment, like the one above, offered few details, like number of plays, amount owed for those plays, all of which has become standard stuff in streaming royalty statements. 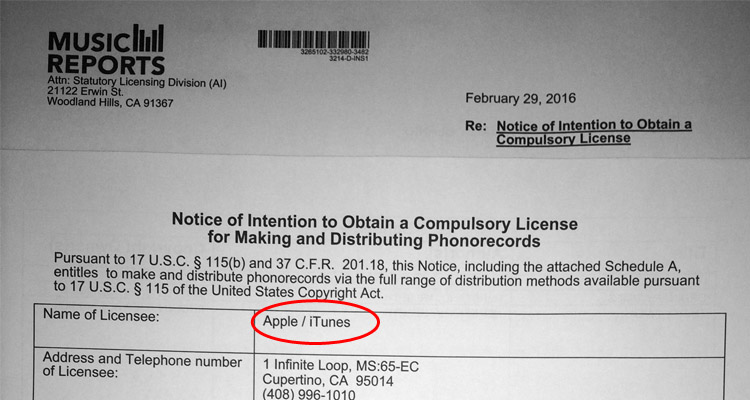 Meanwhile, mega-players like Apple are starting to seriously distance themselves from HFA given the serious legal risks attached.  Just recently, Apple shifted at least part of its mechanical royalty tasks to Music Reports, Inc., an HFA competitor.  Others, including litigated-against services like Rhapsody, Google Play Music and Microsoft-owned Groove Music, are undoubtedly restructuring their arrangements to avoid future liabilities.