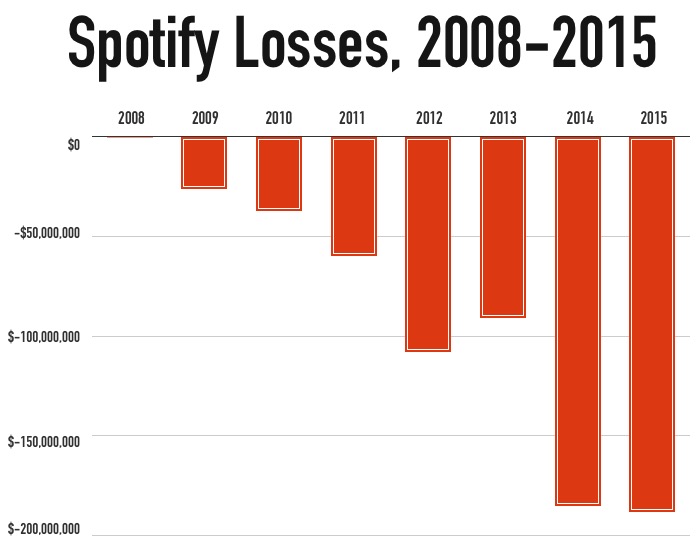 Can this possibly be sustainable?

Spotify tossed another scary financial figure into the ring this morning, with 2015-year losses topping an astounding $188.7 million on revenues of  roughly $2.12 billion. That widens a year-2014 loss of $176.9 million, and brings cumulative losses to $698.1 million since the company started in 2008.  All of which raises the question over whether streaming music is a viable business model.

The plunging losses explain a recent, $1 billion tranche in loans, which brings cumulative loans and debt to roughly $1.56 billion.  But whether that debt can be properly services is now a very real and pressing concern.

The question analysts and the music industry is pondering is whether this math can somehow make sense.  Heavy losses aside, other metrics are booming, including top-line revenues and paying subscribers.  For 2015, Spotify counted total revenues at $2.12 billion, up 80 percent over 2014.  Paying subscribers were counted at 25 million, a figure Spotify has since upwardly revised to 30 million (while hinting at 100 million total users).

Meanwhile, Spotify says payments to rights owners are exploding: the company claims €1.63 billion ($1.82 billion) in royalty payouts last year, up 85 percent.  But a gigantic chunk of that appears to be going to major label partners, all of whom carry equity positions but are simultaneously upping licensing fees.  Meanwhile, artists continually complaining of decreasing per-stream payouts, with data to back it up.

The next step is a massive Wall Street IPO, one that could generate billions in fresh capital.  But here’s another problem: analysts don’t think Spotify will ever reach profitability, at least without drastic changes to its core business model.  “Their operating and net losses were both bigger in 2015 than 2014, and that’s a bad sign for future profitability,” Jan Dawson of Jackdaw Research told Mashable.