How Much Does Spotify Pay for 1 Million Streams? Here’s an Actual Royalty Statement 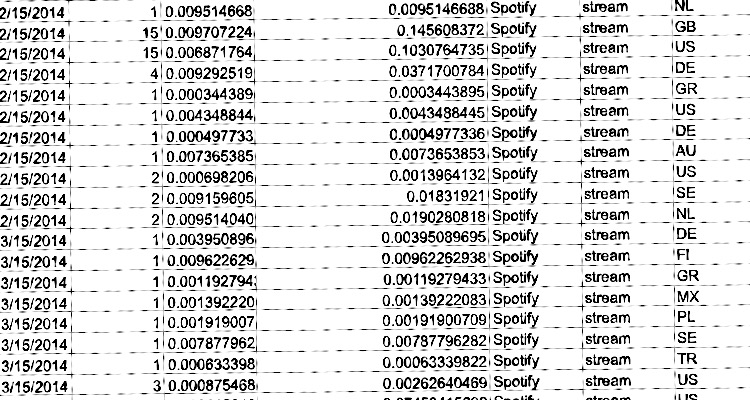 If you’re wondering how much Spotify pays for 1 million streams, we have the answer. This is the largest spreadsheet of Spotify royalties we’ve ever received.

The artists who shared this statement were unsigned until just a few months ago. Now, the group has inked an indie label deal and is quickly gaining steam within a specific EDM niche while generating lots of Spotify streams. Which means they can finally answer the question: how much does Spotify pay for 1 million streams?

While still label-less, they somehow managed to get onto a few Spotify featured playlists.  That’s becoming increasingly difficult for smaller artists, both on Spotify and various Spotify alternatives. Lightning can strike, however, if the right influential playlist curator stumbles upon your music.

We’ve seen this happen before, particularly to singer/songwriter Perrin Lamb, who scored more than $40,000 after getting slotted onto some heavily-streamed coffeehouse playlists (which powered more than 10 million streams).  We asked this group how they got slotted onto their plum playlists, and they told us they’re not sure exactly how it happened.  They weren’t working a strategy, they didn’t have a label at the time, and they definitely didn’t have money to blow on ‘playlist payola’ (and if you think you don’t need that, read this).

That said, it looks like this group has been getting a good amount of critical acclaim and buzz within their electronica niche, especially from their home turf of Australia.  So, it’s not entirely an accident that Spotify picked up on that momentum.

Looks like things are going well for these guys.  The group just signed an independent record deal and keep getting attention (and you’ve probably heard of this label).

And with that, here are this group’s Spotify royalties.  We’re missing that last few months, based reporting lag (and maybe their recent signing), but we’ve straight line estimated those based on the previous data (which goes back to October of 2013).

(March, April, May periods not yet reported; estimated)

And, for those who want to take the plunge, here’s the entire royalty breakdown.

And please share your royalties to [email protected]!  It will greatly help other artists and the industry to get a better sense of what streaming platforms are paying.