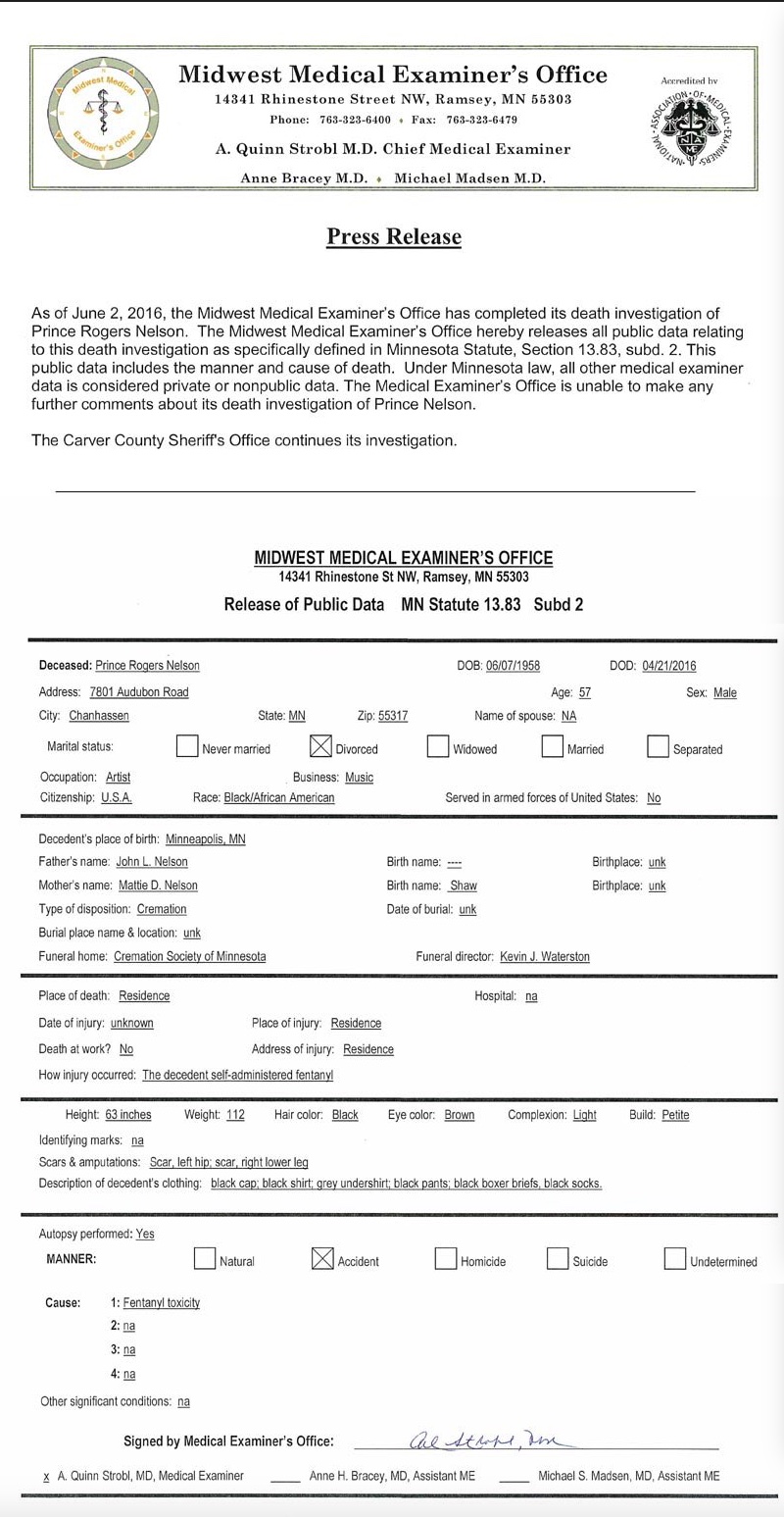 Most fans had no idea that Prince was a user.  But according to a Prince autopsy report released this morning, heavy drug use culminated in a tragic overdose.

Specifically, the official cause of death is listed at ‘Fentanyl toxicity,’ i.e., a drug overdose from an extremely potent type of painkiller.  Typically, fentanyl is administered for heart surgeries and late-stage cancer victims, with an immediate burst of extreme opioid effects.  This is one of the most powerful drugs in the world, and is described as carrying 100 times the potency of morphine, and 50 times the potency of pure heroin.

All of which opens the question of how Prince obtained such a powerful prescription, which was obviously too much for his body to handle.  Typically, the drug is administered to people experiencing excruciating pain, and carries a very high risk of fatal overdose.

Already, a list of suspect doctors is circulating.  The could lead to a fallout resembling Conrad Murray, the doctor who injected the fatal last dose to Michael Jackson.

Another possibility is that Prince obtained the drugs illegally, possibly through a faked prescription.  Either way, the tragic death highlights the growing use of opioids in America.  Over the past few years, America has witnessed sharp spikes in heroin, potentially based on tightening regulations around legal painkiller prescriptions.  In that light, Prince’s tragic death is already being viewed as a wake-up call.

The autopsy ruled out suicide.  But some critics — including Kiss bassist Gene Simmons — have asked if there’s really a difference here.  “But how pathetic that he killed himself,” Simmons blasted.  “Don’t kid yourself, that’s what he did.  Slowly, I’ll grant you… but that’s what drugs and alcohol is: a slow death.”

Simmons later apologized for the remarks.

Prince’s autopsy report also confirms that the singer was cremated shortly after his death.  That will hopefully curb lingering conspiracy theories related to the singer’s final resting place.  Thankfully, conspiracy theories about faked deaths and other nonsense surrounding Prince have been minimal.

The official date of death was April 21st, 2016.  That’s when Prince was found collapsed and unresponsive in the elevator of his home.