Emails from 2014 Show Spotify Was Aware of Royalty Payout Problems 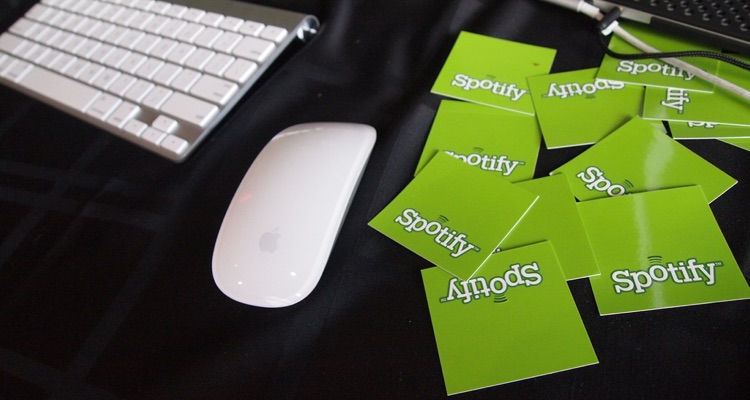 The emails follow the abrupt departure of a top Spotify executive.

Hundreds of emails dating back to 2014 indicate that Spotify executives were made aware of mechanical licensing payout problems, including serious issues with contracted partner Harry Fox Agency (HFA), but failed to take action.  Major issues with non-payment of mechanical licenses to artists ultimately led to a pair of class action lawsuits, which have now been combined with an estimated liability of $150 million.

After those lawsuits were filed, Spotify struck an arrangement with the National Music Publishers Association (NMPA), which called for a $5 million penalty, back-payments to songwriters and publishers, and the construction of a database that properly matches songwriters to songs available on Spotify.  It also includes a $25 million fund to compensate writers that make validated claims, though further penalties and artist relations issues could be next.

The private agreement could effectively deflate the class action lawsuit, though sources now tell Digital Music News that the embarrassing (and expensive) situation has prompted the departure of James Duffett-Smith, Spotify’s former Global Head of Publisher Relations, who is leaving next month after a seven-year tenure.

Now, emails to Duffett-Smith, dating back to early 2014, back those claims.  In the email below, from Jeff Price, CEO of Audiam, Duffett-Smith is alerted of pressing non-payment problems related to mechanicals, including issues with Harry Fox Agency (HFA).  Price, a cofounder of digital distributor of Tunecore, started Audiam to better assist and track royalties for artists.

The email, dated July 2, 2015, specifically expresses frustration that no payments, NOIs, or other alerts are being mailed to artists represented by Audiam (the artists’ names themselves are withheld).  The Audiam roster currently includes Jimmy Buffett, Metallica, Bob Dylan, and Jack White, among other superstar-level artists.  Price himself confirmed the veracity of these emails, informing us that hundreds of emails had been sent over a two-year span.

This, for example, was a follow-up to an earlier alert emailed 18 months earlier (in January of 2014).

Importantly, Price confirmed that no action or response was taken by Duffett-Smith or anyone at Spotify, though it’s unclear if work was being done behind the scenes.  At that point, Price is actively threatening action against Spotify, though ultimately, it was David Lowery who initiated the first class action lawsuit against Spotify in late 2015.

The email above follows a long string of emails, including those specifically tied to artist catalogs that were not being paid (names of artists withheld).  This is just one of several emails sent to Duffett-Smith in June of 2015, with no response.  All of the emails contained detailed spreadsheets with exact ISRC codes matched to the songs and plays in question (ISRC codes are a universal code used for identifying and accounting for royalties). 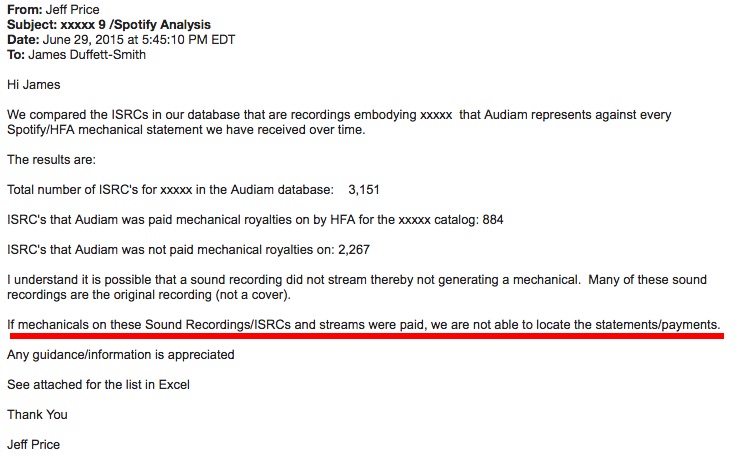 In an email to Digital Music News this morning, Spotify media representative Graham James flatly denied that Duffett-Smith is being pushed out because of the massive mechanical licensing errors.  “James’ departure from Spotify was his own decision after 7 years with the company,” James emailed.  “We were privileged to have had James be a part of Spotify during such a critical time in our development. He will continue to act as an advisor.”

Now, the question is whether the presence of emails dating back more than two years will affect ongoing legislation against Spotify.  The correspondence clearly demonstrates that Spotify was made aware of the situation, and subpoenas of email records could show earlier correspondence.

Meanwhile, Spotify is now expected to announce a replacement for Duffett-Smith, according to sources, largely to mend injured publisher and songwriter relationships.  The executive replacements may also help to reduce legal liability.