Should You License Spotify? Try This Simple Decision Guide… 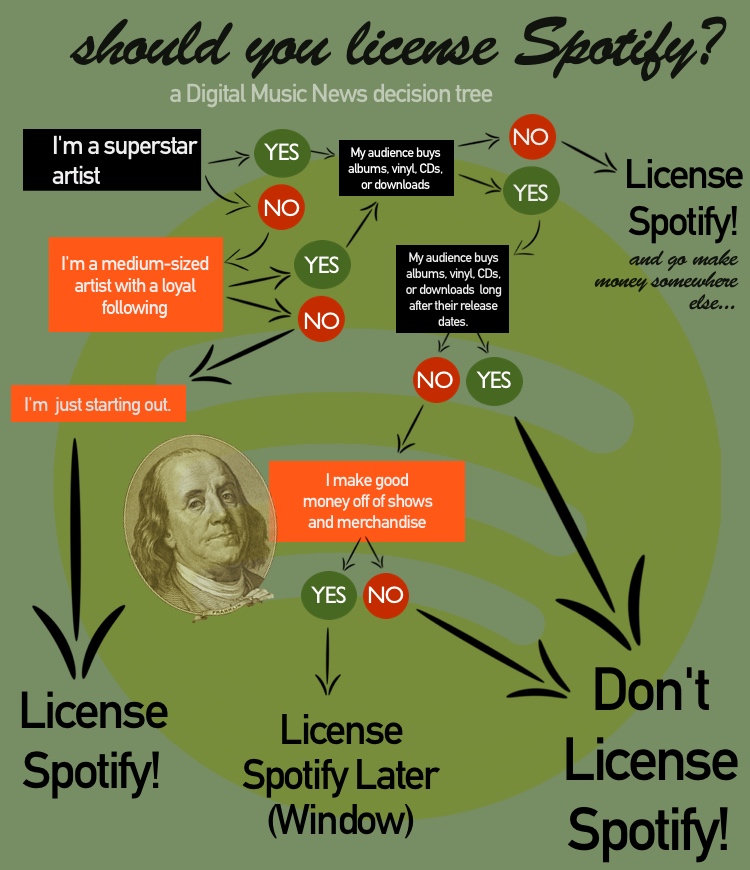 It’s about making the most money off the work you create.

Should you license your music to Spotify, or any streaming channel for that matter?  That’s an incredibly difficult question for any music artist, especially since formats like CDs, vinyl LPs, downloads, and even cassettes generate far greater revenue.  And after talking to a lot of artists and labels, we found that many are attempting to prioritize those formats and license to Spotify and streaming formats later (a practice called ‘windowing’).

Others, especially DJs and EDM artists, rarely sell physical formats or downloads.  Instead, most of their money comes from live shows and constant audience interaction and sharing.  In that case, Spotify is a fantastic lead generator, and can stuff venues with fans (especially if they’re aware of the shows!)

Then, there’s the factor of size.  Are you a massive, superstar artist like Adele?  In that case, you have a totally different decision to make than a developing band.  The reason is that Adele is sacrificing tons of money by quick-releasing to streaming, which explains why she waits so long before opening her albums up to Spotify and other streaming platforms.

A smaller artist, on the other hand, desperately needs to exposure, which streaming can sometimes bestow in heavy quantities.  That includes getting lucky and making it onto a great playlist, or going viral in some fashion.

In-between, mid-sized indie artists can do quite well selling directly to their core fanbases via more traditional formats.  That’s been the learning at Bandcamp, which has been very cautious about pushing artists too aggressively towards streaming.  And part of the reason is that their CD, vinyl, cassette, and download sales keep increasing year-over-year, thanks to a stable of loyal, dedicated fans that want to help their favorite bands.

There’s also the tricky question of piracy, which remains a reality for larger artists.  In general, the more restricted an album or release is, the bigger the piracy problem.  Some artists care little about that, others would rather receive a small amount of money instead of nothing.